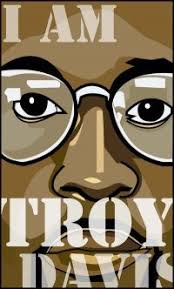 The State of Georgia has murdered Troy Davis.  I don’t use the m-word casually or for rhetorical effect.  But when it is no longer possible to distinguish guilt from innocence, when the state’s case lies in tatters and everybody knows it, there is no civil justification for taking a life.  State-sanctioned killing is never morally justified, but even those who support capital punishment in the abstract should have grave concerns about what happened tonight in Jackson, Georgia.

What happens when all legal remedies have been exhausted and the guilt-innocence question has not been resolved?  Do you carry out the sentence imposed in the good old days when the state appeared to have credible evidence, or do you commute the sentence to life without parole?

I was sitting in the Airport Grocery in Cleveland MS listening to Jake and the Pearl Street Jumpers when the dreadful news from Laura Moye appeared on my cell phone.  I had been having a good time.  Suddenly I was sickened.  I generally eschew emotive language, but this is an honest to goodness outrage.

Please read Laura’s heart-felt message and follow the instructions at the bottom of her message.

Death Penalty, Prisoners and People at Risk, USA | Posted by: Brian Evans, September 21, 2011 at 11:16 PM
After a tense delay of more than 4 hours, the state of Georgia has just killed Troy Anthony Davis.

My heart is heavy. I am sad and angry. Georgia’s criminal justice system behaved with the viciousness of a defective machine, relentlessly pursuing his death while ignoring the doubts about his guilt that were obvious to the rest of the world.

Tonight we witnessed an abuse of power that exposed a justice system devoid of humanity, a dysfunctional destructive force in denial about its own deeply embedded flaws.

Let’s take a moment to honor the life of Troy Davis and Mark MacPhail. Then, let’s take all of our difficult feelings and re-double our commitment to the abolition of the death penalty.

Please take this Pledge, and commit to working for abolition in your community, in your state, in your country, and in the world.

Tonight we mourn … tomorrow we organize!

9 thoughts on “Death comes for Troy Davis: Father forgive us, for we know exactly what we are doing”