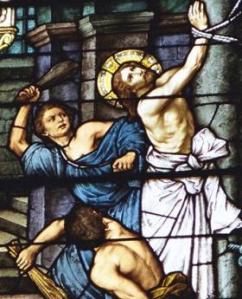 The Senate Intelligence committee’s report on CIA torture begins with a little context:

It is worth remembering the pervasive fear in late 2001 and how immediate the threat felt.  Just as week after the September 11 attacks, powdered anthrax was sent to various news organizations and to two U.S. Senators.  The American public was shocked by news of new terrorist plots and elevations of the color-coded threat level of the Homeland Security Advisory System.  We expected further attacks against the nation.

The implication is clear: Although our report bristles with official lies, cover-ups, brutality, idiocy and systematic sadism, the Senator’s suggest, none of this should be seen as reflecting badly on the national character.  We were a traumatized and fearful nation and we just . . . well . . . we pushed the envelope a bit.  You will be appalled, disgusted, even outraged by what you read in these pages, but the folks responsible for the blatant misconduct described therein meant well.  They were good, honorable Americans like you and me: ordinary people living in extraordinary times.

I suspect they’re right about that.  But the insistence that torture produced nary a shred of good intelligence reflects the hidden fear that, if the American public thought sadistic brutality would make them even a tiny bit safer, they would condone it in a heartbeat.

As well we might.  We are an empire, after all, and citizens of empire have much to fear.  We aren’t as far down the path of blind paranoia as the denizens of the Third Reich or the Roman Imperium that nailed Jesus to a cross, but, if the Senate’s Intelligence committee’s report is anything to go by, we’re getting there.

The dirty deeds described in the report weren’t done dirt cheap.  Over $80 million was paid to a Seattle firm established by James Mitchell and John Bruce Jessen.  Mitchell and Jessen had studied torture techniques used against U.S. military personnel, particularly by the Japanese during WWII, and were regarded as experts in the art of withstanding torture.  In the wake of 9-11, these men were asked to reach into their grisly grab bag and select the most effective methods for opening closed lips.

As William Tecumseh Sherman famously said, “War is hell.”  Successful soldiers must be willing to do terrible things to their fellow human beings, and it helps if the enemy has been thoroughly dehumanized.  Moreover, although we usually prefer to believe otherwise, (we really can’t handle the truth) a truckload of nasty business must be contracted if wars are to be won: mass slaughter, the death and dismemberment of innocent bystanders–that sort of thing.  After all, they will do it to us if we don’t do it to them first.

And here’s the dirtiest little secret of all: in time of war, the folks we normally diagnose as sadistic psychopaths often come in handy.  Consider this troubling excerpt selected at random from the current blizzard of “torture articles”:

Prisoners were walked around naked or were shackled with their hands above their heads for extended periods of time. About five CIA officers would engage in what is described as a “rough takedown”. A detainee would be shouted at, have his clothes cut off, be secured with tape, hooded and dragged up and down a long corridor while being slapped and punched.

Although the “rough takedown” described in this account is tame stuff compared to some of the other revolting revelations in the Report, it gives you a feel for the kind of people the CIA recruited to do its dirty work.  Ordered to participate in this species of gang rape, normal people would shut down emotionally.  So who gets selected for the nasty job?  People who derive a sexual thrill from inflicting pain.

All kinds of intelligence can be derived from torture; but most of it, likely all of it, is completely useless.  If the pain is intolerable, people tell you what they think you want to hear.  Facts in the real world are irrelevant.

The gruesome techniques used by the Japanese weren’t designed to get at the truth; they were designed to force proud enlisted men to recite lines in carefully choreographed propaganda flicks.

Getting enemy combatants to reveal crucial information is important; I understand that.  But successful interrogation begins with establishing trust and rapport in an atmosphere of mutual respect.  Sadists are useless for this kind of task because, by definition, they lack empathy.  You can’t enjoy inflicting pain if you identify with your victim.

If it’s true that effective interrogation requires empathy, compassion, and the forging of bonds of trust, why did the American government pay the big bucks to a corporation that knew virtually nothing about the science of interrogation?

I can think of only one reason.  The CIA’s torture program wasn’t about intelligence; it was about revenge: making men with the slightest connection to the horrors of 9-11 pay for their sins.  It was the myth of redemptive violence on steroids.

Christopher Hitchens spoke for many when he made this post-apocalyptic confession:

I should perhaps confess that on September 11 last, once I had experienced all the usual mammalian gamut of emotions, from rage to nausea, I also discovered that another sensation was contending for mastery.  On examination, and to my own surprise and pleasure, it turned out to be exhilaration.  Here was the most frightful enemy–theocratic barbarism–in plain view . . . I realized that if the battle went on until the last day of my life, I would never get bored in prosecuting it to the utmost.

The CIA boys at the heart of the madness were feeling Hitchens’ groove and, in the giddy process, having the time of their lives.

I am not suggesting that Bush administration officials were consciously looking for revenge or that they were indifferent to fact; I am arguing that a simplistic us-them ideology, rooted in a visceral desire to damage those who had damaged us, elevated a gang of sadistic thugs to positions of obscene authority while experienced intelligence experts were systematically silenced.

Joe Carter is the director of communications for the Ethics and Religious Liberty Commission of the Southern Baptist Convention.  His response to the Senate Committee’s report in Canon and Culture provides a few glimmers of light.  Carter admits that brutal interrogation techniques don’t work very well and states without equivocation that water boarding and forcing people to stand for hours on broken limbs is morally wrong (that’s something).

We must never hesitate to defend our culture, our future, and our lives against those who seek to destroy us. The pacifist’s solution of laying down our arms in the face of such an enemy is suicidal. The conservative position, which is willing to face up to and address the evil of terrorism, provides a more adequate approach.

Yet the conservative position must never forget that the evil comes not just from the actions of “subhuman vermin” but from the heart of a fallen, sacred yet degraded, human being. If we are to preserve our own humanity we must not forget that our enemy differs from us in degree, not in kind.

That isn’t good enough.  Sure, the CIA’s sadistic stratagem’s, however loathsome, fall far short of the outrages perpetrated by Nazi’s or the Japanese during the Second World War, but that’s precisely the direction we have been moving as a nation and we need to admit as much.

More troubling is the substitution of a “conservative” position for a Christian position.  American evangelicals, by and large, are conservatives first and Christians second.  They forget that their Savior was born in a manger who became an illegal alien in Egypt in order to flee the legal violence of Empire.  Finally, our Lord was tortured mercilessly by the Imperial guard before being nailed to a Roman cross.

One thought on “Jesus on the water board: a Christian responds to the Senate Intelligence Committee’s report”