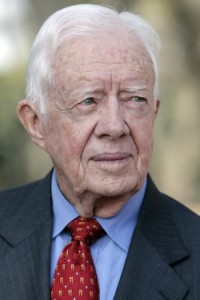 Moral simplicity is all these two men have in common.  Listen to them for five minutes and you know what drives them.

In either case, it ain’t complicated.

The folks grieving with Jimmy and Rosalynn Carter can’t understand the appeal of a man like Trump.  The folks backing Trump’s candidacy dismiss Carter as a failed president, a loser.

There is no sense trying to get the Trump camp to appreciate Carter or the Carter camp to vote for Trump–Trump people and Carter people inhabit divergent worlds.

Jimmy Carter is remembered as a loser because, even in his days as a pragmatic politician, he called America to radical change.  In his “Crisis of Confidence” speech in 1979, Carter identified our big problem.

We always believed that we were part of a great movement of humanity itself called democracy, involved in the search for freedom, and that belief has always strengthened us in our purpose. But just as we are losing our confidence in the future, we are also beginning to close the door on our past.
In a nation that was proud of hard work, strong families, close-knit communities, and our faith in God, too many of us now tend to worship self-indulgence and consumption. Human identity is no longer defined by what one does, but by what one owns.

But we’ve discovered that owning things and consuming things does not satisfy our longing for meaning. We’ve learned that piling up material goods cannot fill the emptiness of lives which have no confidence or purpose.

Carter was critiquing the spirit and substance of Donald Trump.

Our lives aren’t empty, Trump tells us, if we can fill them with enough resorts, casinos and trophy wives.  The problem is that we’ve been so concerned about the emptiness of our lives and our search for meaning that we’ve taken our eyes off what makes America great: owning things and consuming things.  Trump reminds us how rich he is because that’s what marks him as a winner.

Money was never a big motivation for me, except as a way to keep score. The real excitement is playing the game.

With Trump, that’s as profound as it gets.

And a big slice of America likes it that way.

We want to be told we are wonderful and getting better every single day.

We want to believe that America, as the greatest nation in history, has the right, indeed the obligation, to kick some ass.  Violent words backed up, when necessary, by violent action, can solve any problem.

We want to believe that we’ve always been right, that we have nothing to apologize for and that anybody who says different can go to hell.

You’ve heard the familiar critique: “Carter was too good a man to be president.”   If that’s true, Donald Trump is just what the doctor ordered.

Last week, an elderly woman gave me her take on Donald Trump.  “I don’t like him very much.  I don’t think he is a very nice person, to be honest.  But he’s got a lot of money, and he owns a lot of businesses, so maybe he can find some jobs for the young people.”

If the goal is to make money, then you want a CEO who’s loaded.  Am I right?  That’s all that matters, and the minute we start thinking about kindness, sensitivity, fairness, equality, global warming or the rest of that PC crap, we’re screwed.

Donald and Jimmy.  Two contrasting moral visions: one rooted in the greed-is-good philosophy of Ayn Rand; the other inspired by the portrait of Jesus in the Gospels.

As Jimmy Carter prepares to shuffle off this mortal coil, the Donald is surfing a grotesque wave of popularity.

But how will history remember these men (and those who follow them)?

Carter will be celebrated as an unheeded prophet; Trump will be mentioned in a scant footnote as a classic American hate-monger.