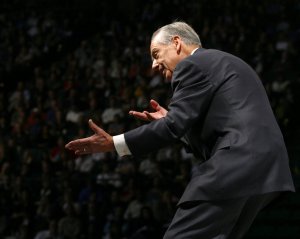 If religion were a thing that money could buy
the rich would live, and the poor would die
(Bahamian folk song)

Darren Grem wrote The Business of Blessing before Donald Trump’s stunning electoral triumph, but the book helps explain the outcome.

Grem’s subtitle, “How Corporations Shaped Conservative Christianity,” suggests that a desperate need for cash tempted leading evangelicals to sell the soul of their movement to the highest bidder. There’s more than a grain of truth in that characterization. When L. Nelson Bell needed money to get Christianity Today off the ground, he sent J. Howard Pew, the owner of Sun Oil, a stick-figure sketch that showed Bell bowing prostrate before his benefactor. “This letter is to be read with the above in mind,” a caption explained.

But the marriage Grem calls “corporate evangelicalism” impacted actors on both sides of the equation.

The author has many important things to say, but it was his section on self-help icon Zig Ziglar that captured my imagination. Corporate evangelicalism found its most compelling message by making “the power of positive thinking” the key to both religion and politics.

The belief that “your attitude determines your altitude” is often associated with television preachers like Joel Osteen and T.D. Jakes but you can hear it in the reassuring bromides of Oprah Winfrey, the advice columns of Dear Abby and the speeches of politicians on both sides of the partisan divide.

Naturally enough, Darren Grem begins with a discussion of Norman Vincent Peale, the fountainhead of positive thinking. Liberal and experimental in his religious views, Peale was dependably conservative in his politics. He hated the New Deal and associated unionism with communism.

But it took a master of the Southern vernacular named Zig Ziglar to create corporate evangelicalism in its pure form: a fusion of conservative Christianity, free market fundamentalism and, of course, positive thinking.

Under the tutelage of Wally Amos Criswell, First Baptist Church of Dallas had become “a nexus of big-business influence and evangelical activity” by the early 1960s. The congregation’s decision-makers were all drawn from the business community, Billy Graham was on the membership roll, and billionaire oilman H.L. Hunt was W.A. Criswell’s most prized convert. Zig Ziglar was already a sought-after motivational speaker when he gave his heart to Jesus and joined America’s first megachurch.

Hillary Hinton Ziglar (his real name) embodied the message he proclaimed. As every audience he ever addressed quickly learned, Ziglar came up hard in Yazoo City, a hardscrabble town in Mississippi Delta. If this poor-white-trash-nobody could make it to the top, Ziglar argued, success was available to all regardless of race or family background.

In a conservative culture still reeling from the mid-century civil rights revolution, Ziglar’s radical individualism came as welcome news. If success and failure are both choices, the despair of the inner city couldn’t be blamed on a white population eagerly fleeing to the suburbs.

And it was in the suburbs that corporate evangelicalism found its true home. In his excellent From Bible Belt to Sun Belt, Darren Dochuk points out that Reagan-era, small-government conservatism was spawned in an economic atmosphere largely created by the defense industry. In Dallas, as Grem demonstrates, the post-war boom was shaped by big oil and the military-dependent aeronautics industry. But in Zig Ziglar’s fictional world, success was a function of personal ambition and a positive attitude, plus nothing. Attributing even the slightest influence to systemic factors like government contracts, the lingering effects of slavery and Jim Crow, or the unfolding reality of white-flight segregation would have ruined the argument and killed the buzz. Attitude was everything.

No deviation from Ziglar’s pure gospel could be tolerated. W.A. Criswell’s star pupil taught positive thinking, free market orthodoxy and theological fundamentalism. Because deviation from any aspect of this three-fold system was anathema we should not be surprised that, as vice president of the Southern Baptist Convention, Ziglar led the fight against theological apostasy in the denominations seminaries.

Southern white conservatives have grown so used to hearing fundamentalism, free market orthodoxy and positive thinking sold as a package deal that when they hear one part of this holy trinity the other two parts are simply assumed. This explains why Trump gets a pass on religion.

Donald J. Trump and Zig Ziglar belong to a pantheon of self-help maestros composing endless variations on the attitude-altitude theme. Trump’s books were wildly popular long before he became the star of “Celebrity Apprentice,” hawked “birtherism,” or threw his hat into the presidential race. Trump may have inherited his fortune from his father, but his business philosophy was imbibed at the feet of his childhood pastor, Norman Vincent Peale.

Trump is often described as a real estate developer, but he has made his big money selling the Trump brand; that is, selling himself. Like him or hate him, our new president is a rhetorical genius pushing a brand his customers know and trust. He may sound like a fool to you, but that’s because he isn’t talking to you. Trump knows his audience and projects contempt for everyone else.

Like Ziglar, Trump embodies his message. By equating customer service with servant leadership, the message is (sort of) harmonized with the Christian gospel. Focus on personal success and you will fail, Ziglar taught; help your customers solve their problems and you will succeed right along with them.

White American evangelicals don’t respond to this message because Trump says it — they’ve been hearing this stuff from the pulpit for decades. As Grem noted in a post-election interview, “Trump never comes right out and says that he’s running on a ‘Protestant work ethic/Spirit of Capitalism’ platform, but that’s the infrastructure undergirding his mammoth personality.”

Close association with the marketing industry taught conservative Christians the importance of branding. This concern was the reason Henry Crowell transferred his “guaranteed pure” philosophy from Quaker Oats to the Moody Bible Institute. Fearing the total disintegration of their worldview, conservative Christians are drawn to safe, dependable brands. What Grem calls “the evangelical culture industry” succeeds by providing trustworthy products and personalities. Christians are then defined as people who spend their money on Christian consumer items.

Evangelicals don’t trust any old Bible, it has to be the King James, the New King James of the New International Versions — all others are suspect. For the same reason, Grem reports, the evangelical culture industry has afforded “a select handful of evangelical writers a legitimacy that might supplement or even replace local pastoral authorities.”

The demonizing of “liberalism” in all its guises is the dark flipside of this quest for authority. L. Nelson Bell didn’t just create Christianity Today to compete with the liberal Christian Century; the goal was to delegitimize the very idea of liberal Christianity. In the process, Grem says, “the notion of a liberal ‘Christian businessperson’ became something of an oxymoron.” This singular celebration of conservatism “crowded out other definitions of ‘evangelical’ and ‘Christian’ that might have made more room for, say, working-class concerns or challenges to white privilege and patriarchy.”

When religion is a thing that money can buy, the rich appear as saviors and the poor are transformed into self-sabotaging whiners.

A constituency set on delegitimizing the very idea of liberal Christianity is not upset when Donald Trump denigrates his critics. Evangelical votes share their candidate’s Manichean worldview. There is no place in this vision for deviation or diversity — the children of darkness must perish. The “lock-her-up” chant is best understood in this light. Donald J. Trump may not be the kind of “conservative” favored by the National Review or academic evangelicals like Russell Moore; but he is precisely the brand of conservative created by the religious-corporate fusion Darren Grem describes in The Blessings of Business.

As Donald Trump’s popularity plummets, liberals are placing bets on how long he can stay in office. But even the total collapse of a Trump presidency won’t magically resuscitate a liberal brand that, in the American heartland at least, has been robbed of its legitimacy. A viable progressive vision won’t emerge until liberals develop the same sense of urgency and grim tenacity that birthed corporate evangelicalism.

But the very simplicity that makes corporate evangelicalism and Donald J. Trump marketable commodities makes it impossible to engage with our monstrously complex world. The Southern Baptist Convention and a variety of other evangelical groups have experimented with “racial reconciliation,” but so long as the religious culture denies the significance of systemic injustice the results of these efforts will be meagre. Until conservative white America admits that its own sins, past and present, must be repented and renounced, America can never be great.

One thought on “How Corporate Evangelicalism elected a president”