When you take a careful look at the details of the official story presented at David Black’s trial, it crumbles to dust. It’s all impossible.

I am not obsessed with guns. But since the public conversation is so obsessed I feel that I, as a person of faith, should respond. In particular, I am responding to two legislative proposals in two different state legislatures.

First: a legislative proposal right here in the Lone Star State would allow students to carry guns on college campuses and in the classroom. I will be charitable in my characterization of that proposal as seriously misguided.

Widely accepted research into the development of the human brain informs us that the frontal lobe is not fully developed in young males until about age 25. Therefore they are more prone to rash and risky behavior. Insurance companies recognize this in their premium rates for automobile insurance for males under 25. END_OF_DOCUMENT_TOKEN_TO_BE_REPLACED 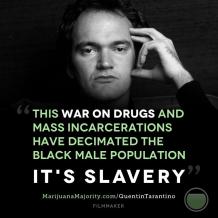 Like most celebrities with a limited grasp of the issues, Tarantino garbles his facts a bit.  Most drug war prisoners aren’t held in private prisons and aren’t working for corporations who exploit prison labor.  This happens, to be sure, but it isn’t the typical scenario.   END_OF_DOCUMENT_TOKEN_TO_BE_REPLACED

Art Kellermann, an ER physician and researcher at Emory University, crunched the numbers and discovered that “a gun kept in the home was 43 times more likely to be involved in the death of a member of the household than to be used in self-defense.”  The NRA was so concerned about the thrust of Kellermann’s research that they shut it down.  This isn’t about protecting the Second Amendment, it is about making the world safe for those who manufacture and sell firearms.  If you didn’t catch this piece on NPR this morning, please give it a look, or click on the link below and give it a listen.

Vice President Joe Biden is getting ready to make recommendations on how to reduce gun violence in the wake of the school shooting in Newtown, Conn. END_OF_DOCUMENT_TOKEN_TO_BE_REPLACED 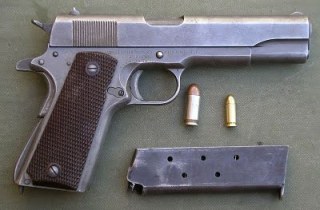 So long as the consequences of gun violence are born by poor black males, Cole believes, the nation will not pass meaningful gun regulation laws.

There are two obvious responses to Cole’s argument.  It has frequently been noted that most of the cities with high rates of gun-related homicide already have strict gun control laws.  But this only underscores the need for national legislation that discourages people from importing guns into urban neighborhoods.

The second quibble is even more obvious: if poor black males are using guns to kill one another that’s on them.  The only solution, this argument goes, is for young black males to use firearms more responsibly. END_OF_DOCUMENT_TOKEN_TO_BE_REPLACED

Americans are also far more likely to use firearms to kill people.  In the United States the homicide by firearm rate is 3.2 per 100,000 per year.  In the rest of the developed world, the rate varies between 0.0 in Japan (where only 11 homicides were recorded last year) and Belgium at 0.7.  In Canada, the rate is 0.5, less than one-sixth the American rate. END_OF_DOCUMENT_TOKEN_TO_BE_REPLACED

A shooting rampage at a Connecticut elementary school this morning has left 27 people dead, 18 of them children.

What is there to say?  We ask why anyone would want to carry two automatic weapons into a public place and start shooting.  There is no good answer to that question.  But we know that every so often somebody does just that.  The public place might be a theater, or a mall, but schools seem to have a particular attraction for young white men with guns.

The Connecticut outrage may be the worst such event in American history.  Unfortunately, that record won’t stand for long.

According to FOX news personalities it is tacky to argue for gun control in the wake of yet another tragedy.  We shouldn’t make important decisions while we’re still reeling in shock.  If people want to kill they will find a way.  After all, guns don’t kill people, people kill people.

But the people intent on killing people make a much better job of it if they can get their hands on an automatic weapon.  I have no problem with the guy next door having a hunting rifle under lock and key, but there is no justification for any American civilian owning a weapon designed for killing lots of people quickly.

That’s all they’re good for.

And that’s why they should be banned.

I like the balance in this piece.  The NRA didn’t turn James Holmes into a killer.  The Tea Party is not to blame.  Batman didn’t make it happen and neither did the ACLU or the liberal churches of America.  When tragedy strikes, we want to make sense of things, we want to blame somebody.  But as the Joker explained to Batman in an earlier Dark Knight film: “some men just want to watch the world burn.”  AGB

Any suggestion that a cold-blooded killer is God’s agent to punish a wicked land is simply wicked.

When tragedy strikes, we always, always, want to know why. If there’s a reason, some one to blame, then tragedy is not mindless.

It fits into a pattern.

It makes some kind of senseless sense.

I don’t know why, and neither do you. The words of Alfred (Michael Caine) in The Dark Knight (2008) in relation to the Joker (Heath Ledger) have been bouncing around the Interwebs as we wrestle with the question: “Some men aren’t looking for anything logical, like money. They can’t be bought, bullied, reasoned, or negotiated with. Some men just want to watch the world burn.” END_OF_DOCUMENT_TOKEN_TO_BE_REPLACED

Miguel De La Torre is professor of social ethics and Latino/a studies at the Iliff School of Theology in Denver and an ordained Baptist minister.  When I first read this piece a couple of days ago, I was shocked by its emotional tone and wondered why the horrific events in Aurora CO were affecting this guy so much more deeply than they affected me.  Was he a bit thin-skinned, or was I emotionally retarded?

When I realized that Dr. De La Torre’s children lost friends in the Aurora shooting everything snapped into focus.  This opinion piece originally was originally published by the Associated Baptist Press.  AGB

It has been a horrific day, and as I type these words the day is not yet over. I have shed tears. I have hugged my daughter closer. I have yelled and cursed God. I am emotionally spent. Still, I must capture this moment in words. Where the hell was God while innocent lambs were being slaughtered?

IN an interview with CNN, Bill Cosby argues that the Trayvon Martin case is more about guns than race.  If George Zimmerman was scared and carried a gun to ease his fear, Cosby says, it doesn’t matter if he wasn’t a racist.  The question is, who taught him to be afraid, and who taught him that carrying a gun would solve his problem?   You can find a video of CNN’s interview with Cosby clicking here and scrolling down.

Mark Osler and Jeanne Bishop begin their CNN opinion piece by seconding Cosby’s motion.  They aren’t saying that racial profiling wasn’t involved in the Martin case; but Florida’s Stand Your Ground law is the big issue:  “This law is grounded in a factual error and a deeply flawed principle,” Osler and Bishop believe. “The factual error is that a proliferation of handguns makes us safer. The flawed principle is that somehow the right to bear arms needs to be enlarged to a right to resolve disputes with guns.”

(CNN) — As criminal attorneys, we know that tragic cases very often bring festering social issues into public view. Bill Cosby was right: The Trayvon Martin case brings to the surface troubling questions not only about race but also about the role of handguns in our society. END_OF_DOCUMENT_TOKEN_TO_BE_REPLACED