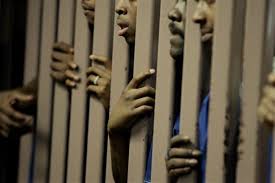 Among those present at this private meeting were two Harlem residents who have endured the prison system for decades and survived to tell the tale. END_OF_DOCUMENT_TOKEN_TO_BE_REPLACED

Take a moment to check out this video of an interview with Michelle Alexander, author of “The New Jim Crow: Mass Incarceration in the Age of Colorblindness,” and hear her response to the recent execution of Troy Davis. MW

If you’ve never heard of Stetson Kennedy, you’ll feel as if you’ve known the man all your life after reading this wonderful eulogy by University of Florida professor Paul Ortiz.  Kennedy is generally remembered as a thorn in the side of the Ku Klux Klan, but as Professor Ortiz makes clear, his significance is much deeper and broader than that.  Until this morning, I had never heard Stetson Kennedy’s name mentioned in connection with racism, segregation, white supremacy or the civil rights movement.  How can that be?  AGB

By Paul OrtizStetson Kennedy passed away on Saturday, Aug. 27. He was 94 years old. Stetson died peacefully in the presence of his beloved wife, Sandra Parks, at Baptist Medical Center South in St. Augustine, Florida.

Stetson Kennedy spent the better part of the 20th century doing battle with racism, class oppression, corporate domination, and environmental degradation in the American South. By mid-century Stetson had become our country’s fiercest tribune of hard truths; vilified by the powerful, Stetson did not have the capacity to look away from injustice. His belief in the dignity of the South’s battered sharecroppers, migrant laborers, and turpentine workers made him the region’s most sensitive and effective folklorist.

Stetson was so relentless, so full of life, that some of us thought that he would trick death the way that he had once fooled the Ku Klux Klan into exposing their lurid secrets to the listeners of the Adventures of Superman radio program in 1947. As recently as April, Stetson gave a fiery speech to hundreds of farm workers and their supporters at a rally in support of the Coalition of Immokalee Workers in Tampa. Standing in solidarity with Latina/o and Haitian agricultural workers affirmed Stetson’s ironclad belief in the intersections between labor organizing, racial justice, and economic equity. END_OF_DOCUMENT_TOKEN_TO_BE_REPLACED

On Saturday, June 18th, Friends of Justice joined dozens of civil rights veterans in honoring the memory of James Earl Chaney, Andrew Goodman, and Michael Schwerner.  For those who worked in Mississippi during the 1960s, the cruel and cowardly murder of three civil rights workers epitomizes a painful period.

The Mississippi phase of the civil rights movement doesn’t get nearly as much attention as corresponding events in nearby Alabama.  There was plenty of terror in Alabama as well; but it was offset by triumph.  Apart from the freedom rides of 1961, Mississippi didn’t produce a lot of victories.  Passionate support for segregation was almost universal among white folks.  In many counties, not a single black voter was registered when the Voting Rights Act was signed into law in 1965.  In Mississippi, two armies, one dedicated to “state’s rights” (full-blown Jim Crow segregation), the other dedicated to Civil Rights (racial equality reinforced by racial justice) fought to a bitter standstill.  END_OF_DOCUMENT_TOKEN_TO_BE_REPLACED

On Wednesday May 27, 2011, 16 year old, Brandon Ross and 15 year old, Tatoiun Williams allegedly stole a man’s wallet and iPod at gun point. When the police caught up with the teenagers, Williams reportedly had a gun in his hand. The police officer shot the young man, killing him.

Although, Williams was killed by the officer, Ross is charged with murder, “the unlawful killing of another human being with “malice aforethought“.” Stunned by the charge against Ross, many have commented on articles and blog posts reporting the story. A large portion of the comments display sympathy for Ross and lament for Williams, but  others favor the legal charges against Ross. END_OF_DOCUMENT_TOKEN_TO_BE_REPLACED

On May 4, amateur historian David Barton appeared on Jon Stewart’s Daily Show.  Barton’s central argument was that, constitutionally, the first amendment applies to the federal government but not to the states.  Therefore, if individual states and municipalities see fit to make the Bible the sole standard for criminal and civil law, to reinstate chattel slavery or to make Christianity an official and protected religion, the federal government can do nothing about it.

Barton didn’t suggest that non-federal governments should do these things, merely that they can if they want to.

On May 14th, Jon Stewart invited Richard Beeman, an actual constitutional scholar at the University of Pennsylvania, to respond to Barton’s theory. END_OF_DOCUMENT_TOKEN_TO_BE_REPLACED

In the 1920s, with the fundamentalist-modernist controversy raging within his own Northern Baptist Convention, John D. Rockefeller built an architecturally imposing church in the heart of one of New York’s most prestigious neighborhoods, opened it to people of all Christian denominations and called an American Baptist preacher named Harry Emerson Fosdick to be his pastor.  Through the years, Riverside Church has become associated with prophetic preaching, dramatic worship and ecumenical mission.

In 1992, Riverside Church adopted a statement of faith proclaiming:  “the worship of God, known in Jesus, the Christ, through the inspiration of the Holy Spirit … to serve God through word and witness, to treat all human beings as sisters and brothers; and to foster responsible stewardship of God’s creation … The church pledges itself to education, reflection, and action for peace and justice and the realization of the vision of the heavenly banquet where all are loved and blessed.”

This statement of faith nicely captures the conclusion of Michelle Alexander’s address at Riverside this past weekend.  Calling for “A great awakening” Alexander re-stated her firm belief that only a new social movement can end mass incarceration in America.  As her closing remarks make clear, this movement must be built on a solid moral foundation and, for those of us who follow Jesus, that means taking our Savior at his word.  END_OF_DOCUMENT_TOKEN_TO_BE_REPLACED

“Public relations consultants like the FrameWorks Institute — which dedicates itself to ‘changing the public conversation about social problems’ — advise advocates to speak in a ‘practical tone’ and avoid discussions of ‘fairness between groups and the historical legacy of racism.’  Surely the Rev. Dr. Martin Luther King Jr. would have rejected that advice.”

– “We know through painful experience that freedom is never voluntarily given by the oppressor; it must be demanded by the oppressed.  Frankly, I have yet to engage in a direct-action campaign that was ‘well timed’ in the view of those who have not suffered unduly from the disease of segregation .  For years now I have heard the ‘Wait!’  It rings in the ear of every Negro with piercing familiarity.  This ‘Wait!’ has almost always meant ‘Never!”

Over at his excellent Sentencing Law and Policy blog, Doug Berman highlights an amazing opinion recently issued by US District Judge Jack Weinstein in the case, United States v. Bannister.  (You can find the full opinion here.)  Federal judges aren’t as constrained by mandatory minimum sentences as they once were, but Jack Weinstein makes it clear that the sentences in this case would have been much less severe if he had his druthers.

“These defendants are not merely criminals,” Weinstein concludes, “but human beings and fellow American citizens, deserving of an opportunity for rehabilitation. Even now, they are capable of useful lives, lived lawfully.”

The eighty-nine year old Weinstein is a philosophical dinosaur who believes we have a duty to create a just society (what kind of socialist claptrap is that?)  Read this brief excerpt from a much longer sentencing opinion and you will learn precisely what is wrong with America’s war on drugs. END_OF_DOCUMENT_TOKEN_TO_BE_REPLACED

The good folks in Wichita Falls, Texas are celebrating the arrest of 44 drug kingpins, with four or five additional arrests waiting in the wings.

“It’s a good number of arrests, but the reality is there are probably still five-times as many of these types of criminals out there,” Sheriff David Duke told the Wichita Falls Times Record News. “It’s a scary thing to think that this stuff is being sold in our neighborhoods, near our children. A lot of these dealers are armed because of competition with other dealers. And many will steal, rob and commit financial crimes to facilitate their operations.”

No one associated with the infamous Tulia drug sting of 1999 can read these words without recalling the proud pronouncements of Swisher County Sheriff Larry Stewart and his undercover man, Tom Coleman. END_OF_DOCUMENT_TOKEN_TO_BE_REPLACED