On several occasions in recent months, the death penalty debate has made its way into the public spotlight.

In September, Rick Perry made headlines at a Republican debate when the fact that he presided over 234 executions in Texas was met with cheerful applause. Later that month, media coverage of death penalty issues surged again when the State of Georgia executed Troy Davis despite significant doubts surrounding his guilt. Moreover, recent stories of death row exonerations served to increase concerns about the use of capital punishment in the U.S.

A Gallup poll conducted in October indicated that U.S. support for the death penalty dropped to a 39-year low. In fact, just a few weeks ago, Oregon Gov. John Kitzhaber halted the death penalty stating, “I simply cannot participate once again in something that I believe to be morally wrong.”

Today, Laura Sullivan from NPR reported that for the first time in over 30 years, fewer than 100 people were sent to death row in 2011. “Just 78 offenders were handed capital sentences,” Sullivan says,  “And only 43 inmates were executed — almost half as many as 10 years ago.”

What do these changing trends mean for capital punishment in the U.S? END_OF_DOCUMENT_TOKEN_TO_BE_REPLACED 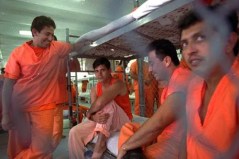 A federal judge has upheld key portions of an Alabama immigration law that will likely drive thousands of Latino students out of the public school system.  Under the new law, public schools can now determine the immigration status of students.  Police can also question residents suspected of being undocumented and hold them without bond.

The Alabama law, as originally passed, was designed to make it impossible for undocumented residents to live in Alabama.  Judge Sharon Blackburn has temporarily blocked provisions that would:

_ Make it a crime for an undocumented immigrant to solicit work.

_ Make it a crime to transport or harbor an undocumented immigrant.

_ Forbid businesses from taking tax deductions for wages paid to workers who are in the country illegally.

_ Bar drivers from stopping along a road to hire temporary workers.

_ Make federal verification the only way in court to determine if someone is here legally.

Since the Hispanic population of Alabama is 3.9 percent, one wonders why state politicians are suddenly so exercised about immigration.  It’s simple.  Conservative politicians got elected by promising to clamp down on illegal immigration.  END_OF_DOCUMENT_TOKEN_TO_BE_REPLACED

Our twenty-four hour news cycle doesn’t lend itself to careful analysis of complex social movements.  Rick Perry, the pugnacious presidential hopeful, raised eyebrows when he used a loose network of organizations associated with the New Apostolic Reformation to organize a big religious-political rally in Houston.  Interest quickened when the mainstream media learned that some of Perry’s friends were “Dominionists,” folks who want to bring secular politics (and everything else) under the dominion of God.

The questions couldn’t be avoided.  If elected, will Rick Perry pack his cabinet with Christian preachers?  Since that didn’t sound likely, the pundits too-easily assumed that politicians like Rick Perry and Michelle Bachmann are just standard-issue conservatives with close ties to the religious right.  END_OF_DOCUMENT_TOKEN_TO_BE_REPLACED

Under Governor Rick Perry’s leadership, the state of Texas has executed a shocking number of individuals (234 to be exact). When this fact was mentioned at the GOP debate on Wednesday evening, it was welcomed with cheerful applause.

Perry went on to defend his record of executions stating:

Although the death penalty was mentioned in the debate, no meaningful discussion occurred. For example, nothing was said about the moral issues surrounding capital punishment. Nor was there mention of the fact that the death penalty disproportionately affects poor people of color, or that research suggests that capital punishment does little (if anything) to deter crime. Moreover, there was no talk of the number of individuals who are wrongfully convicted and even wrongfully executed by the dysfunctional Texas justice system. END_OF_DOCUMENT_TOKEN_TO_BE_REPLACED