By Alan Bean
In a recent post, I suggested that Carrollton, Mississippi, a town that proudly flies the Conderate flag outside its courthouse, reflects the soul of America.  Charles Kiker, my esteemed father-in-law, calls that an overstatement.  This op-ed from Massachusetts governor Deval Patrick illuminates my audacious thesis.  As Patrick notes, small government fundamentalism has captured the conservative movement and, to a large extent, the conservative movement has captured American politics.
True, a Democrat is in the White House and the Senate remains blue.  But anyone who listened to President Obama trying to adopt a tough stance with Republicans the other day will realize that Grover Norquist’s intention has been realized: Democratic presidents can no longer govern as Democrats.  Obama was trying to come on strong, but he sounded scared to death.  Conservatives control the moral consensus of the nation and the President knows it. END_OF_DOCUMENT_TOKEN_TO_BE_REPLACED

A monument to “The memory of Carroll’s Confederate Soldiers who fought in defense of our constitutional rights from Bethel to Appomattox” stands in front of the Carroll County courthouse in Carrollton Mississippi.  No surprise there; virtually every county courthouse in Mississippi constructed before 1920 sports a civil war memorial.  But few of these monuments are accompanied by the Confederate flag.  We’re not talking about the Mississippi state flag that incorporates the stars and bars–this is the genuine article. END_OF_DOCUMENT_TOKEN_TO_BE_REPLACED

On May 4, amateur historian David Barton appeared on Jon Stewart’s Daily Show.  Barton’s central argument was that, constitutionally, the first amendment applies to the federal government but not to the states.  Therefore, if individual states and municipalities see fit to make the Bible the sole standard for criminal and civil law, to reinstate chattel slavery or to make Christianity an official and protected religion, the federal government can do nothing about it.

Barton didn’t suggest that non-federal governments should do these things, merely that they can if they want to.

On May 14th, Jon Stewart invited Richard Beeman, an actual constitutional scholar at the University of Pennsylvania, to respond to Barton’s theory. END_OF_DOCUMENT_TOKEN_TO_BE_REPLACED 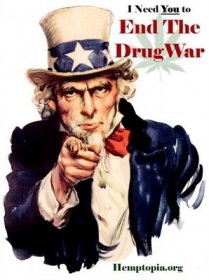 John McWhorter and Michelle Alexander agree that the war on drugs should be abandoned.  They also agree that far too many young black males are languishing in American prisons.  But McWhorter thinks Alexander’s call for a consensus-shifting movement is wrong-headed.  It’s wrong-headed because it’s impractical.  It’s impractical because white people are sick and tired of being demonized.  As McWhorter sees it, we simply will not listen to a social analysis that identifies white racism at the heart of the problem.

McWhorter isn’t saying that Alexander is wrong when she associates the war on drugs with a “Southern strategy” rooted in white resentment; he just feels that, as a practical matter, that argument can’t be sold in the white-dominated American marketplace.

This is an important issue.  For criminal justice reformers, it is THE issue.  Should we embrace the “only a movement” philosophy of Michelle Alexander, or the “end the drug war and white guilt is gone” idea John McWhorter has been championing?  Alexander is asking for the second phase of the civil rights movement; McWhorter is looking for an argument that works in an incurably cynical world.

One thing is certain: at some point we must connect with white moderates; if we don’t, the political fight cannot be won.  But how do we win over white moderates?  Do we conform our arguments to their fears, anxieties and preferences, or do we challenge them to embrace a revolutionary vision grounded in love, mercy and justice?

Whether Michelle Alexander knows it or not (and I suspect she does) she is calling for nothing less than a full-blown religious revival.  The values she espouses are biblical values; they won’t work in the political arena, and they aren’t that welcome in most white churches either (if the preacher gets concrete and specific).  Martin Luther King knew that mainstream white America wasn’t ready for integration, so he launched a movement fired by a religious revival.  Mainstream white America isn’t ready to end the drug war; it could even be argued that white folks need the drug war because it reinforces our most cherished prejudices.  Can anything short of a spiritual revival alter this social landscape? END_OF_DOCUMENT_TOKEN_TO_BE_REPLACED