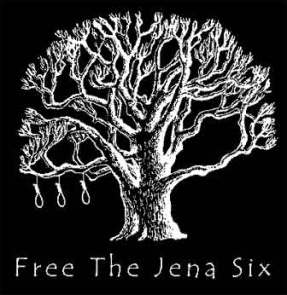 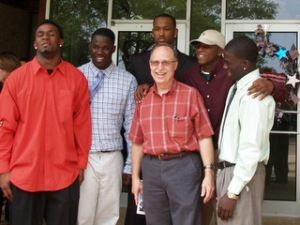 The Jena 6 and Justin Barker are now free to move ahead with their lives.  The terms of the plea agreement were revealed in the course of a two-hour court hearing at the LaSalle Parish courthouse.  Each of the five remaining defendants in this case pleaded “no contest” to the misdemeanor charge of simple battery.  Each will be placed on non-supervised probation for one week and must pay a $500 fine and in most cases an additional $500 in court costs.  In addition, a civil suit filed by the family of Justin Barker was settled when the Jena 6 defendants (including Mychal Bell) agreed to pay the Barker family an undisclosed settlement.  Attorneys are not allowed to reveal the details of the settlement but a reliable source has disclosed that the payment was approximately $24,000.

The picture above was taken on the LaSalle courthouse steps moments after the settlement brought a two-and-a-half year legal fight to a satisfying conclusion.  Pictured (left to right) are Corwin Jones, 20, Jesse Ray Beard, 18, Bryant Purvis (20), Robert Bailey (19) and Theo Shaw (20) and, in the second row, yours truly (56).  Judge Thomas Yeager was clearly impressed that all five of the defendants who appeared before him today are enrolled in college.  Two of them tell me they are considering law school. 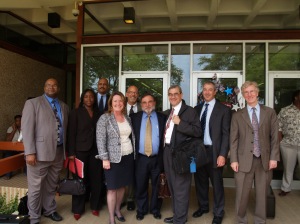 I will explain how we got to this point in a later post, but the short answer is that we were able to recruit skilled and dedicated attorneys (some of whom are pictured to the left).  The legal fight never attracted much media coverage, but everyone familiar with the American criminal justice system knows it is virtually impossible to achieve a positive outcome in a morally and factually ambiguous case without highly trained legal professionals.

The legal fight began in earnest when the Southern  Poverty Law Center agreed to secure the services of the best defense attorney in Louisiana–they did some checking and called up Jim Boren of Baton Rouge.  Jim’s involvement opened the door to pro bono talent from law firms in Chicago and New York City.  In addition, several regional attorneys lent their talents to the project. 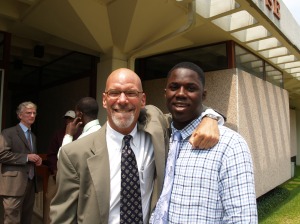 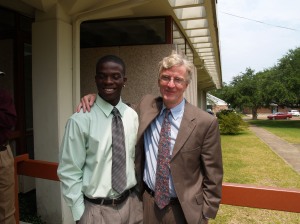 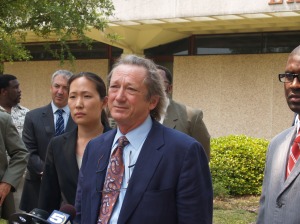 I will have more to say about this historic settlement in the next few days.

Have you heard about the Jena 6 and looking to take action? Here’s a quick overview on how to get involved with the Jena 6 cause, and with Friends of Justice, the grassroots organization that brought this case into the international spotlight.

Friends of Justice organizes in poor communities across Texas and Louisiana to hold our criminal justice system accountable to our nation’s highest values. This month, we brought international media attention to a dramatic trial in Jena, Louisiana, where a young black teenager was convicted of aggravated assault for a schoolyard altercation. The school incident was the culmination of a series of events beginning with white students hanging nooses in a tree at the high school courtyard, to warn black students not to sit there. After this hate crime was dismissed as a harmless prank by the school administration, black students protested under the tree. The local District Attorney was called in to warn the black students that he could take their life away with the stroke of a pen. After authority figures refused to take a stand against racism, the noose incident led to a series of increasingly violent interactions between white and black students.  Friends of Justice has argued from the outset that this racial animosity could have been avoided if local officials had responded appropriately to the noose incident.  It is unacceptable, therefore, that the District Attorney who poured gasoline on the fire should now be prosecuting these cases.

You can read the full report of Friends of Justice here: Jena 6 summary.

Here are three ways to show your support for the Jena 6, the young men who sat under that “white only” shade tree, protested the nooses, and are now facing over twenty years in prison.

1. Support Friends of Justice as we continue our organizing for the Jena 6!

Friends of Justice organizes across Texas and Louisiana to generate media scandals around cases of abusive prosecution and civil rights violations in the criminal justice system. We were called by the families of the Jena 6 because we have a reputation for getting justice for cases like theirs.

You can designate your donation for the “Jena 6 Initiative”. Your money will go to our organizing in Jena, where our two big tasks right now are: 1. recruiting pro bono legal assistance, and 2. working nonstop with reporters and editors to get more news outlets to cover the Jena story.

You can donate securely on Paypal by following this link. Alternately, you can send a check to the following address:

2. Sign up for Action Updates on the Friends of Justice blog

We post regular updates on Jena on our blog: https://friendsofjustice.wordpress.com/blog/

To sign up for Action Updates, click the link on the right margin of our website, and entering your email. You’ll get an email when we post to the blog and when we have opportunities to take action.

3. Organize a Protest in your City, and invite the media!

If you’re planning a Jena 6 protest in your city, post a comment on our website and we’ll publicize it on the blog. We recommend collaborating with an organization that can send a press release to your regional media outlets and contact reporters–this way, your protest will stoke them to cover the Jena 6 story if they haven’t already.

If you’d like to get diverse faith communities involved in the protest, you might try consulting various online directories and meetup sites for social justice religious groups. We recommend the Sojourners Faith & Justice directory, which gives contact information for congregations and individuals who care about justice: http://www.sojo.net/index.cfm?action=get_connected.directory

4. Sign the Petition!
Our partner organization Color of Change has prepared a petition that you can sign at http://colorofchange.org/jena/main.html.

5. Write a Letter to the Editor of your local paper!

Editors really sit up and take notice when people write in about a particular event! Writing a Letter to the Editor gets more people to read about the Jena 6, and it also lets the media know that this is something their readers really care about!

Thanks to everyone who has already taken action for the Jena 6 and donated to the work of Friends of Justice in Jena! And if you want to publicize an upcoming action on the behalf of the Jena 6, please post a comment to our blog and we’ll publicize it.

Participate with a secure donation to Friends of Justice today!

Become a monthly supporter and receive our thank-you gift: a copy of Taking Out the Trash, the story of the Tulia drug sting scandal that gave birth to our movement for justice.