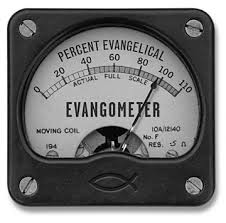 By Alan Bean
Fred Clark is the best Christian blogger in the world.  Well, at least he’s my favorite Christian blogger.  He may be American evangelicalism’s harshest critic, largely because he grew up in the belly of the beast and knows how these people think and feel.  He’s not some out of touch liberal bashing a culture he doesn’t understand; he grew up in this world and, to a large extent, never left.  Fred doesn’t enjoy bashing evangelicals . . . well, maybe he does, but for the very best reasons.

In this piece, Clark explains why pro-life politics has become such a big deal for a group that, prior to 1980, believed abortion was a regrettable fact of life that should be legally protected.

The greatest danger of someone like Fred Phelps, Amethyst Marie writes, is that ”Phelps and others like him let us believe that being better than them is good enough.”

That’s what I’ve sometimes called “Melon morality” — from Rodney Dangerfield’s character in Back to School, who said, “If you want to look thin, you hang out with fat people.”

And if you want to look righteous, you compare yourself to the most evilest evildoers you can imagine: Satanic baby-killers.

Alas, the initial self-righteous buzz of smug satisfaction from this comparison quickly begins to fade. To maintain that intoxicating reassurance of your own goodness you will need to make this Melon morality structural. You will need to reshape your politics, your religion and your culture to fortify and perpetually reinforce this constant comparison. You will need to rebuild and reconstitute all of these things around this one central fact: Your moral superiority to the Satanic baby-killers.

This man will show you how it’s done.

It is against the law of man, of “Thou shalt not kill.” When a man — when a husband and wife come together — life begins at conception. You ask me why these people are holding signs? I’m gonna teach you. They want to kill babies.

He is not alone.

That same idea has become the central organizing principle of evangelical Christianity in America. Forget the etymology of those terms. Evangelical Christianity is no longer about the message of good news or about Christ. It is about being better than the Satanic baby-killers. That is the core of evangelical identity. That is the one essential tenet of white evangelicalism that cannot and must not ever be questioned. See those people over there? They want to kill babies. We do not want to kill babies. We are better than them.

And yet it doesn’t work. Not even after demolishing and rebuilding our entire religion, church and faith around this central principle of our moral superiority to these supposed Satanic baby-killers.

It can never work, because no matter how hard we try, we can never wholly forget that being “better than” someone else is never good enough. Our desperate quest to find some extravagant evil other with whom we can compare ourselves favorably will always end with the hollow recognition that such comparisons cannot satisfy. Reassuring ourselves that we are “not as bad as” someone else will always seem empty because it doesn’t address the ever-present sense that we are not as good as we ought to be or as we are capable of becoming.

Becoming better, though, is hard. So instead of working at that, we set out to imagine others as ever worse — as not just worse than us, but as superlatively evil. Thus the central focus on Satanic baby-killers, and the steady stream of accompanying Hitler analogies.

C.S. Lewis warned us that this could only end badly:

The real test is this. Suppose one reads a story of filthy atrocities in the paper. Then suppose that something turns up suggesting that the story might not be quite true, or not quite so bad as it was made out. Is one’s first feeling, “Thank God, even they aren’t quite so bad as that,” or is it a feeling of disappointment, and even a determination to cling to the first story for the sheer pleasure of thinking your enemies are as bad as possible? If it is the second then it is, I am afraid, the first step in a process which, if followed to the end, will make us into devils. You see, one is beginning to wish that black was a little blacker. If we give that wish its head, later on we shall wish to see grey as black, and then to see white itself as black. Finally we shall insist on seeing everything — God and our friends and ourselves included — as bad, and not be able to stop doing it: we shall be fixed for ever in a universe of pure hatred.

American evangelicalism has been reshaped and redefined as precisely the thing that Lewis warned against — a never-ending quest for “the sheer pleasure of thinking [our] enemies are as bad as possible.”

“They want to kill babies.” It doesn’t matter that this is not true — that this is false witness borne against our neighbors. The only thing that matters is how it feels to imagine what it would mean if it were true — the “sheer pleasure” of being able to tell ourselves that others’ supposed wickedness somehow constitutes righteousness on our part.

That is the process that has made us into devils.