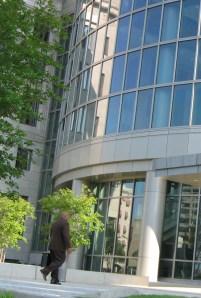 Alvin Clay is an innocent man and federal prosecutors can’t prove otherwise. But the government’s criminal behavior in this case has been gross, obvious and persistent. Vindictive federal officials investigated Clay when there was no evidence of guilt; they committed perjury to get Clay indicted, and when their bogus indictment unraveled, they unleashed a campaign of dirty tricks to bring Clay down. Sadly, little of what follows will be allowed into the federal courtroom when Mr. Clay goes to trial on May 27th.

The Clay fiasco is best envisioned as a three-ring circus.

The center ring involves the details of a vindictive prosecution: investigation without evidence of wrongdoing, indictment-by-perjury, and illegal smear campaign.

Ring three features a strange story from Lonoke County in which Bob Govar, the federal prosecutor who inspired this mess, reveals his vindictive temperament and proves to be much more vulnerable to guilt-by-association prosecution than Alvin Clay).

In ring one we find Operation Wholesale, a remarkably corrupt undercover operation that, thanks to Alvin Clay, brought Bob Govar, the US attorney’s office, and the FBI within a whisker of national scandal.

For thirty years, Bob Govar has served as a federal prosecutor. Until recently, he was chief of the criminal division of the US Attorney’s office, Eastern Division, in Little Rock, Arkansas.

Eight years ago, Govar and Clay collided in a federal courtroom in Little Rock. Bob Govar was trying to salvage a massive drug sting dubbed “Operation Wholesale”. The idea was to use a black cop and a black informant to nail fifty black drug suspects in central Arkansas. After the big roundup, the confidential informant confessed that the sting had degenerated into a scam to defraud the federal government: three-quarters of the cases were pure inventions.

The undercover cop stood by the sanctity of the operation.

Ethically, the government had no choice but to scrap every indictment associated with Operation Wholesale. Instead, Bob Govar decided to salvage two dozen cases in the hopelessly tainted cop claimed to have witnessed the deal.

The informant was charged with perjury and obstructing justice and Alvin Clay was assigned as defense counsel.

The defendant could have accepted a plea deal for eight months, but he took his case to trial because he didn’t want to accept sole responsibility for a corrupt operation. He was convicted and sentenced to ten years of hard time in a federal penitentiary.

It was obvious to any sensible observer that Bob Govar was sacrificing innocent black defendants to save the government from acute embarrassment. One defendant proved he was incarcerated at the time of the alleged deal. Charges were dropped. Another defendant had an affidavit from the informant saying the deal didn’t happen. A clergyman produced documentary evidence that the house trailer mentioned in the police report wasn’t moved to the property until months later. Nonetheless, a jury convicted.

In the course of a four-day trial, Alvin Clay accused the government of prosecutorial misconduct in the furtherance of an inherently racist drug investigation.

Fortunately for Bob Govar, the media gave his office the benefit of the doubt. But Bob Govar knew that Alvin Clay’s impertinence had brought the U.S. Attorney’s Office and the FBI within a hairsbreadth of disaster.

Two years later, Alvin Clay accused the government of prosecutorial misconduct in second case. Bob Govar called in the FBI to investigate his impertinent rival. There wasn’t much to work with. Clay ran a real estate agency as well as a law office-but there was no evidence of wrongdoing.

A quick investigation revealed that Clay’s contractor’s license could be connected to five suspect real estate deals. At the time, Clay had been working a full roster of legal cases while supervising six real estate agents. He had received a modest fee for allowing a subcontractor to use his contractor’s license. None of the witnesses interviewed linked Clay to illegal activity.

Govar and his subordinates obtained a grand jury indictment by portraying Alvin Clay as the mastermind of fraudulent operation. FBI Agent Rodney Hayes left grand jurors with the false impression that Clay was directly responsible for performing rehab work-no mention was ever made of a subcontractor.

Hayes testified that Clay and his co-conspirators had inflated the appraised value of the properties-a patent falsehood.

He testified that Clay Construction “wasn’t a real company” when he knew it was.

He testified that Donny McCuien played only a minor role towards the very end of the process when McCuien was intimately involved from the beginning.

Much of this testimony came in response to questions posed by Govar. Both men were willing to feed the grand jury a diet of lies if that’s what it took to get an indictment: garbage in-garbage out.

When Clay’s defense team cried foul, Govar denied that he had played a role in presenting the case to the grand jury. Judged Leon Holmes took the chief of the criminal division at his word.

When grand jury transcripts proved that Govar was lying; Holmes wrote it off as an innocent error.

Bob Govar and the Eastern Division of the US Attorney’s office were quietly recused from the case and the Western Division dropped the false charges from the indictment. The new indictment tacitly acknowledged that Clay’s role was peripheral. He was now charged with knowing that his co-defendants were up to no good.

While this legal fiasco was playing out in the federal courthouse in Little Rock, a parallel drama was unfolding in nearby Lonoke County.

Jay Campbell was one of several public officials Bob Govar had shielded from the consequences of their actions over the years. After being fired from the Pulaski County (Little Rock) Sheriff’s Department in 2000, Campbell was elected Lonoke police chief. Six years later, the roof caved in on Campbell and his wife Kelly. In addition to a laundry list of drug-related crimes (buying, selling and using) Jay Campbell was accused of hiring out state prisoners for personal profit.

Campbell’s well-heeled customers included his old friend Bob Govar. A man with thirty years experience as a federal prosecutor said he didn’t know it was illegal to hire inmates to clear his land.

DA Lana McCastlain begged the FBI to investigate this impossible tangle of criminal allegations but she was rebuffed. Garrick Feldman, editor of the Arkansas Leader accused Govar and the FBI of knowing that an overburdened district attorney would lack the resources to shift the investigation in their direction.

Bob Govar reacted to Feldman’s challenge the same way he reacted to Alvin Clay’s persistent allegations. In an email written on the official stationery of the U.S. Attorney’s office, Govar accused Feldman of damaging his professional reputation. After threatening to sue the feisty editor for $50 million, Govar said he looked forward to owning the Arkansas Leader.

Garrick Feldman forwarded the email to Govar’s superior and the Govar was immediately demoted from his position as chief of the criminal division.

The weight of history

The Alvin Clay case shows how easily bad public policy translates into human misery. Men like Bob Govar don’t prosecute low-status black drug defendants while shielding their influential white counterparts because they are bigots; they are just trying to protect the dignity and prestige of the federal government from the absurdities of the war on drugs. When men like Clay and Feldman threaten to bring down an exceptionally fragile house of cards they must be dealt with.

Judge Leon Holmes won congressional confirmation by the slimmest of margins. Questions during the nomination process focused on Holmes’ tendency to brand pro-choice activists as Nazis, denigrate feminists, and endorse the subordination of women.

Not enough attention was paid to Judge Holmes’ statements about race.

Judge Holmes believes fervently in the principle of racial equality. But he has referred to the “providential” impact of American slavery, he has suggested that civil rights activism becomes a negative influence when it loses the support of the white majority, and he has argued that the federal government lacked the authority to end the segregation of southern public schools.

Does Holmes believe that Arkansas Governor Orval Faubus was justified in fighting for a segregated public school system? So it appears.

Judge Holmes is typical of a generation of educated white southerners who affirm the principle of racial equality while celebrating their southern heritage. To a man like Judge Holmes, Alvin Clay’s allegations, however well grounded, have a subversive ring.

Fortunately, Judge Holmes is driven by a passionate desire to do the right thing. Whether good intentions can override profoundly conservative instincts remains to be seen.

The Alvin Clay case shows the tragic consequences of reducing judicial oversight over domestic surveillance. For the past eighteen months, the FBI has used a tap on Alvin Clay’s phone to spread suspicion, dissension, heartache and confusion throughout his entire social network.

Clay’s day-to-day experience reads like a Hollywood screenplay. The allegations would read like a psychological thriller if they weren’t so carefully documented.

Friends old and new, intimate and casual, professional and private, have received intrusive calls from FBI operatives. Federal agents have disguised themselves as Alvin’s ex-wife, as former business partners, and as drug defendants. Girlfriends have been informed that Alvin is HIV positive (untrue), and that he is a convicted felon (also untrue).

A girlfriend received a phone call consisting of an intimate tape recorded conversation between Clay and another woman.

Potential clients have received calls warning them not to hire Clay and his debtors have been dissuaded from paying their debts.

In recent months, six drug defendants have informed Clay that agents with the FBI, the ATF and the US Attorney’s office have been pressuring them to implicate Clay in some form of drug crime. It is natural to assume that dozens of equally compromised individuals have received the same treatment.

It is not unusual for drug suspects to receive this carrot-and-stick, “I-can-be-your-best-friend-or-your-worst-enemy” treatment from federal agents. It’s a form of crude psychological torture that often induces the victim to say whatever it is the government wants him to say. It’s a recipe for wrongful prosecution.

Ever since Bob Govar was recused from the Clay case, the federal government has unleashed its full fury against Alvin Clay. In the process, dozens of innocent people have been traumatized in a failed and futile attempt to manufacture a crime against an innocent man.

A simple process of elimination identifies the FBI as the prime mover in this campaign of illegal surveillance. No one else has either the authority or the ability to do this kind of mischief.

Is this dirty tricks campaign illegal or merely immoral?

The ravages of 9-11, the invasion of Iraq, and the murky provisions of the Patriot Act have severely undermined standards of accountability in the intelligence world. The moral lines have blurred and patriotic Americans like Alvin Clay are routinely treated like enemy combatants.

This is not the first dark night of the American soul, nor will it be the last.

Alvin Clay’s May 27th trial coincides with the 50th anniversary of these events. On the first day of trial, friends of justice will be walking the mile of sidewalk between Central High School and the federal courthouse. Can you join us?