Almost 600 people were taken into custody yesterday in Laurel, Mississippi.  Of this group, 450 were immediately shipped off to the ICE (Immigration and Customs Enforcement) prison in Jena, Louisiana.  The AP story is here, and the New York Times article is here.

As I have previously mentioned, Jena’s prison has a painful history.  Originally opened as a private (for profit) juvenile facility, the Jena prison was forced to close in response to accusations of racially motivated abuse.  The facility re-opened post-Katrina as an overflow facility for state inmates from New Orleans.  Once again, allegations of racism and abuse shut the prison down.

Hope springs eternal, however, especially in the prison business.  If you built it, they will come.  No matter how badly you screw up you will be forgiven.  The Jena facility reopened this year as an ICE prison designed for the sort of people arrested in the Mississippi sweep.  This kind of immigration bust creates extreme anguish in the affected community and, in some towns, has left businesses on the verge of bankruptcy.  Only a few thousand of the between ten and twenty million undocumented workers in the United States are touched by these sweeps, but that’s okay, the strategy is to keep up appearances.

These pictures of Jena’s spanking new ICE prison was taken a few days before the big march in Jena last September.  You will notice the signs of construction–the ICE facility has been greatly expanded.  Jena residents rejoiced when the contract was signed. 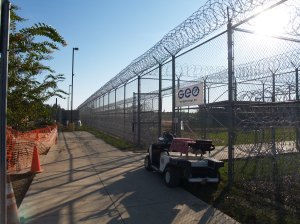 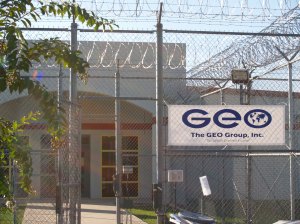 The Geo Group was once known as Wackenhutt.  After frequent association with scandal the company wisely changed its name.

The immigration issue stirs strong passions.  The government has a compelling interest in maintaining secure borders.  Workers are often concerned that the undocumented are taking jobs from American citizens.  Some of the articles about the raid in Mississippi noted that Black and white workers cheered as the detainees were led away.  This issue has driven a wedge between Black and Latino communities.

Big business supports the idea of comprehensive immigration reform.  Entire industries (fruit and vegetable farms, meat packing plants, etc.) have become dependent on undocumented workers.  Superficial security checks are run at the time of hiring, but it isn’t hard to obtain fake papers.  Big business loves illegal immigration because it creates a large labor pool and the undocumented can’t complain when they are exploited.

George W. Bush and John McCain are both in favor of comprehensive immigration reform.  Both men hail from border states so they understand the complexities of the issue.  Barack Obama talks tough on immigration (like virtually every other politician in America) but is more inclined to hold employers accountable.

I have always identified with immigrants, legal and illegal, because I carried a green card for over twenty years before becoming an American citizen this February.  I came to the United States because I married an American citizen.  Earlier, my wife Nancy emigrated to Canada because she married me.  We know how it feels to wake up in a foreign country.

In Tulia (our home until July of last year) Nancy and I lived in close proximity to the local Latino community.  In fact, two young Mexican women on student visas stayed with us while they completed High School.  Nancy and I often attended dances and weddings at which we were the only Anglos and nobody spoke a word of English.

Nativists have a hard time with immigrants who don’t speak English–especially if they show a fondness for the Mexican flag.  But when you can’t feed your family in your home village, and you know well-compensated work is waiting just across the border, you do what you have to do.

“But it’s against the law!” Lou Dobbs roars, “these people are criminals!”

Of course they are, in the technical sense.  But desperate people play by their own rules.  If Lou Dobbs was reincarnated as destitute peasant in Monterey he’d soon show up in Los Angeles with his wife and kids and nobody with an ounce of compassion would blame him.

Until recently, the business community took advantage of lax border security by hiring millions of untrained manual workers while government officials winked in the background.  Meanwhile, it became harder and harder for people from Mexico and Latin America to enter the country legally.  We must have secure borders, but we must also make it possible for people to become American citizens without paying thousands of dollars, struggling through miles of red tape and waiting for years.  I waited four years before Homeland Security was willing to take a chance on me.  In the post-9-11 world my work was considered subversive.  But delays of two and three years are not unusual.

The raid ICE carried out in Mississippi yesterday was more symbolic than practical (unless you are a Geo Group executive and need the warm bodies).  How long will it take for Howard Industries to replace 600 workers?  Assuming these people were being paid just above than minimum wage, it is difficult to argue that native born Americans will be eager to take their jobs.  And if we punish the plant by shutting it down for a year, can you imagine the impact on the local economy?

There are no easy answers to the immigration conundrum, but nativist hysteria solves nothing.  Compassionate Americans want to open our borders to as many foreign nationals as the economy and the social infrastructure can accommodate.  Unfortunately, the sort of xenophobia flowing from talk radio (and Mr. Dobbs program on CNN) make it difficult for well-intentioned politicians, Democrat or Republican, to make much headway on this issue.  Politicians can’t afford to get too far ahead of the social curve.

2 thoughts on “Six Hundred arrested in a single immigration raid”