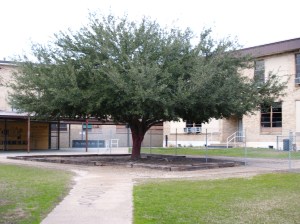 RESPONDING TO THE CRISIS IN JENA, LOUISIANA

The Jena Case in Brief

On the morning of September 1, 2006, three nooses dangled from a tree in the High School square in Jena, Louisiana.  The day before, at a school assembly, black students had asked the vice principal if they could sit under that tree.

Characterizing the noose incident as an innocent prank, a discipline committee meted out a few days of in-school suspension and declared the matter settled.

At the end of November, the central academic wing of Jena High School was destroyed by fire (the smoke damage is evident in the picture above).  Over the weekend, a stream of white-initiated racial violence swept over the tiny community, adding to the trauma and tension. The following Monday, a white student was punched and kicked following a lunch-hour taunting match.  Six black athletes were arrested and charged with conspiracy to attempt second-degree murder.  If convicted, some defendants are facing sentences of between twenty-five and 100 years in prison without parole.

A survey of relevant events:

The competence and independence of investigators is seriously in doubt.

The behavior of school officials and school board members reflects a breathtaking insensitivity to the mixture of anger, intimidation and horror inspired by the hate crime of late August.

Restoring justice to Jena will require the following:

5 thoughts on “The Original Friends of Justice Jena Narrative”