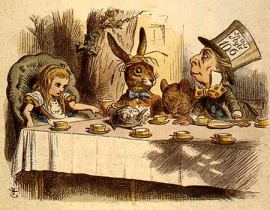 A new poll by the New York Times and CBS News suggests that  Tea Party activists aren’t disaffected rednecks damaged by the current recession.  In fact, they are wealthier and better educated than most Americans.  They are more likely than most Americans to give a rosy assessment of their personal financial standing and are just as likely to describe their current tax burden as “fair”.

Most Tea Party folk don’t think Sarah Palin is qualified to be president.

So what is the Tea Party crowd so upset about?

So how, exactly, do the Tea Party people differ from standard Republicans and the general public?

The big differences appear in response to questions about aid to the poor, in general, and to African-Americans in particular.

According to the report in the New York Times:

Tea Party supporters’ fierce animosity toward Washington, and the president in particular, is rooted in deep pessimism about the direction of the country and the conviction that the policies of the Obama administration are disproportionately directed at helping the poor rather than the middle class or the rich.

The overwhelming majority of supporters say Mr. Obama does not share the values most Americans live by and that he does not understand the problems of people like themselves. More than half say the policies of the administration favor the poor, and 25 percent think that the administration favors blacks over whites — compared with 11 percent of the general public.

They are more likely than the general public, and Republicans, to say that too much has been made of the problems facing black people.

Does this make the Tea Party movement racist, or are the folks at movement rallies just confused?

The Tea Party phenomenon provides a massive tent under which malcontents of all kinds have taken refuge.  Some of these people are racists, some are mentally unstable, some are conspiracy theorists, most are just deeply conservative people who sense the nation’s best years are gone.

White supremacy racists comprise a small minority of the Tea Party movement and moves are afoot to clamp down on the cranks.

On the other hand, can concerns about high taxes and the national debt really account for the passion driving the Tea Party movement?  Where were these folks when George W. Bush was transforming the Clinton surplus into a black hole of deficit?

And why are Tea Party people far more positive about the Bush presidency than most Republicans?

Traditionally, American politicians who talks about improving the lot of  the  poor have been denounced as socialists.  President Obama is a pragmatic centrist, a mainstream Democrat shopping for the best deal.  But you get the sense that Obama cares about poor people without health care, quality schools or a realistic shot at the American dream.  Most poor people are white, but the public face of American poverty is black.

The fact that Obama is African-American adds to the sense of alarm, but, even in the South, the color of the president’s skin isn’t the chief factor driving the discontent.

Are Tea Party folks concerned about debt and taxes?  Sure.

But is this concern, by itself, enough to create a mass movement?

The numbers say no.

One thought on “Tea party people by the numbers”