On June 7, 2010, Curtis Flowers will go to trial for a sixth time on the same murder charges.  That has never happened before in the state of Mississippi.

It has never happened anywhere in America.

Why has it been so difficult for the state to get a final conviction?  The first three trials were overturned on sustained charges of prosecutorial misconduct.

In trial four, all seven white jurors voted to convict while all five black jurors held out for acquittal.  How do we account for this racial divide?

It comes down to life experience.  White jurors identify with the victims of a crime that left four defenseless people dead inside a Winona furniture store.  Bertha Tardy and Carmen Rigby were prominent members of the local white community; their deaths shocked and outraged their friends and families.  Young Bobo Stewart had his entire life ahead of him.

Race figures prominently in the Flowers saga, but this is also a story about relationship.  At the courthouse, a brother of the slain Robert Golden, an African-American, sits with the families of the white victims.  Like them, he sees this case through the lens of grief.

Black jurors in Montgomery County aren’t indifferent to the deep sorrow surrounding them.  They too want the person (or persons) responsible for the Tardy tragedy to pay.  But black jurors have a hard time seeing the Curtis Flowers they know as the triggerman.

Two black men, Curtis Flowers and Doyle Simpson, became persons of interest within an hour of the crime.  Simpson had reported a missing handgun.  A check for $82 and change made out to Curtis Flowers was found on Bertha Tardy’s desk.

Curtis had worked for Bertha Tardy for three days in early July, but didn’t return after the 4th of July break.  Did he leave on bad terms?  Did he think he had a score to settle?

Any competent investigator would ask these questions and Flowers provided credible answers.  Bertha Tardy had told him on his first day on the job that damaged merchandise would come out of his check.  On July 3rd, Curtis was loading some golf cart batteries up the street at the Coast to Coast hardware store.  He didn’t secure his load properly and several batteries were damaged.

When I visited Curtis at the Leflore County jail last week I asked if this incident upset him.  “Not at all,” he replied.  “Ms. Tardy had been very clear about that from day one.  I knew I needed to be careful and I wasn’t.”

Flowers didn’t return to work the following week because he was interviewing for a better paying job.  He didn’t get that position, but he realized the futility of working in a furniture store for minimum wage.

Still, he got along with the people at Tardy’s.  “I didn’t have too much personal dealing with Ms. Tardy,” he told me, “but she was always good to me.  Now, Ms. Carmen Rigby was a real nice person and we got along very well.  Old John Tardy used to sit looking out the window waiting for somebody he knew to walk in.  When I was dusting, I’d pretend that he was part of the furniture.  He always got a kick out of that.”

Flowers got a decent job right out of high school at the Richardson Bros. furniture factory.  He worked there for seven years making 25% more than he earned at Tardys.  But Richardson Bros. started laying people off in 1996 and eventually closed down.

Curtis would have liked to get married, settle down and raise a family, but that was hard to do on minimum wage, even while sharing a duplex apartment with his girlfriend, Connie Mae Moore, and her children.  Curtis drove an old truck for a while, but it had broken down and he couldn’t scratch together enough money to get it fixed.  As a result, he had to walk or catch rides with friends.

By the time he was arrested in January of 1997, Curtis and Connie Mae were working in Plano, Texas, a suburb of Dallas while living with relatives.

Investigators knew that if Curtis was the killer he had to walk to Tardy Furniture, gun down four people, then walk home.  That’s why investigator John Johnson started knocking on doors in the neighborhoods between the duplex on McNutt and Tardy Furniture. 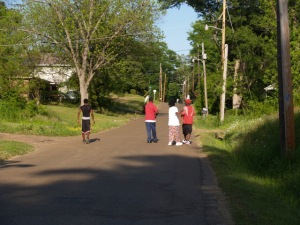 I have walked the mile-or-so between the duplex and Tardy’s and it altered my understanding of the case.  I suspect I was observed by 175 people during the 36 minutes it took to get to Tardys and back.  Apart from the three police cars I encountered, I didn’t see a single white face.

In poor black neighborhoods, people spend a lot of time on the porch, the front steps and the sidewalk, especially in the relative cool of a July morning.  Had he walked to Tardys on the day of the murders, Curtis would have been seen by far more people than I encountered, and most of them would have known him by name.

“As soon as those posters started going up offering the $30,000 reward,” one woman told me, “people was saying, ‘I wish I knew something.’”  If Curtis Flowers had walked to Tardys the morning of the murders, all sorts of people would have seen him and they would have been lining up to say so.

People didn’t come to the police saying they had seen Curtis—the police had to go to the people. Even then, it took nine months to connect Curtis to the scene of the crime.

Black jurors in Winona find this suspicious.  They know the people testifying against Curtis too well to take them seriously.

The case comes down to character.  Whoever pulled the trigger five times in the Tardy Furniture store was a coldhearted killer, a psychopath without sympathy or remorse.  No one could be further from that profile than Curtis Flowers.

In the black community, Curtis was primarily known as a happy-go-lucky gospel singer; a quiet guy with an impish sense of humor.   Gospel singers are subject to the full range of human temptation, of course, and are as capable of shabby, low down behavior as the rest of us.  But the terrible crime that shocked Winona in the summer of 1996 wasn’t just criminal, it was pathological.

This was not a crime of passion.  A human being repeatedly raised a gun and fired a bullet through the skull of a defenseless person.  Most people, even the worst of people, couldn’t do a thing like that once under any circumstances.  This guy did it four times.  It’s the sort of crime you have to work up to.  The killer who shocked Winona had done this sort of thing before.

Imagine the interior of a furniture store: end tables, lamps, wood and glass.  Now imagine that you are in the store with three other people and a single gunman.  So long as the gun hasn’t been fired, you may think it best to stand your ground, hoping for the best.  But the man steps behind a co-worker and a body slumps to the ground.

Now you head for the exit.  You know you could take a bullet in the back, but that’s preferable to certain death.

There was no evidence of flight or struggle at Tardys.  Bertha Tardy fell at least fifteen feet from the other victims but no one tried to run.  They waited their turn.

This tells us two important things.  First, there may only have been one shooter, but there were two gunmen.  No one is going to wait for death if there is any chance of survival.

Secondly, this crime was premeditated.  When you enter a business after 9:15 in the morning, you expect to encounter more than one employee. If you don’t want witnesses you cross the threshold prepared to commit multiple murders.

Is Curtis Flowers capable of cold premeditation?  I can’t believe it and neither can those who know Curtis best.  He is no psychopath.  And he isn’t crazy enough to believe that he could walk clear across town with a handgun tucked inside his shorts without being detected by dozens of people.  You might walk to a crime scene in a crowded city under the cloak of anonymity; but not in a community where, as in Cheers, everybody knows your name.

It has been almost fourteen years since Curtis Flowers last set foot in the free world.  In all that time, he hasn’t had a single disciplinary write-up.  Psychopathic killers can feign sociability and even affection for brief periods, but it doesn’t come naturally and cracks soon appear in the façade, especially in a prison environment.

Curtis hasn’t just stayed out of trouble, he has won the respect and admiration of everyone he comes across.  “I’ve worked in this jail a long time,” a prison guard told me, “and I can tell you one thing, Curtis doesn’t belong in here.  He is kind, compassionate, helpful, and always respectful.  A lot of these guys talk like they’re all innocent, but watch them long enough and they’ll give themselves away.  A person who is violent on the streets will get violent in here too.  It’s just a matter of time.”

“Now Curtis Flowers,” the guard concluded, “is the finest young man that ever put on a pair of pants.”

Curtis was recently transferred from the Carroll-Montgomery County Correctional Facility in Vaiden to the Leflore County Jail in Greenwood.  He’s been on lockdown ever since—twenty-three hours a day in a cramped cell with no social contact.  Thus far, no one has provided a good explanation.  At a recent hearing in Winona, prosecutor Doug Evans suggested the transfer was made at the behest of the Carroll County Sheriff.  “He had his own cell phone in there,” Evans declared, “he had the run of the whole place.”

I asked Curtis if this was true.  “It isn’t anything like he made it sound,” Curtis told me.  “I just like to stay active.  You know, when I see something broken I want to fix it, if I see a mess I want to clean it up.  So they let me out of my cell a lot because work needs to be done and I’m happy to do it.  After a while, you get to know all the staff that way.  I treat them with respect and they do the same for me.  But nobody ever let me have a cell phone or anything like that.”

In the courtroom, Flowers is portrayed as a lazy slacker who quit a job over a salary dispute, then tried to get even through theft and murder.

White jurors remember the victims, peruse the gruesome pictures, listen to the eyewitnesses and enter the deliberation room primed for a guilty verdict.

No one sees the man who leads the gospel singing at chapel services, signs up for every self-help course offered and prefers custodial work to television.

Curtis Flowers can’t prove his innocence.  He readily acknowledges he was alone between 9:15 and 10:00 on the day in question.  “I just told them the truth,” he told me last week.  “I figured if I was innocent I had nothing to worry about.  I guess I was wrong.”

When the state can’t get a guilty verdict and the defense can’t win an acquittal, what’s the end game?