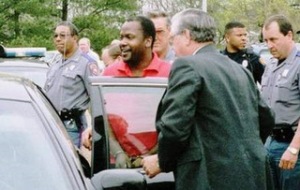 On June 7, 2010, Curtis Flowers becomes the first man in American history to go to trial six times on the same captial charges.  But why should anybody care?

If you get your news from conservative blogs and Fox News, the plight of a black murder suspect probably isn’t high on your list of concerns.   Curtis Flowers was found guilty by three separate juries, so he must be guilty, right?

If your taste runs to progressive politics you may have developed a mild interest in racial justice.  But who can keep up with all the horror stories?  After a while, compassion fatigue sets in.  Besides, criminal cases are so damn complicated–who has time to absorb all the details?

Now, DNA cases are another story.  They do the test, the guy is proven innocent, and you see him striding out of the courthouse sandwiched between jubilant attorneys.  DNA don’t lie, so the details don’t matter.  The state messed up–end of story.

This being the case, isn’t it best to give the DNA guys their half hour of fame and let the non-DNA folks fend for themselves?  Makes sense, right?

Only 10% of violent crimes involve the kind of DNA evidence that points unambiguously to guilt of innocence.

Since most jurisdictions don’t save physical evidence, ten years down the road there’s usually nothing to test.

So if you want to know how the system goes off the rails, and why it happens so often, you’ve got to wrestle with the Flowers case.  Here’s five good reasons to break down and pay attention.

1.   Post DNA advocacy must expose the mechanics of wrongful conviction, and it’s all on display in the Flowers case.  On May 23, 2010, the Dallas Morning News reported that “The flood of exonerations in Dallas County, where since 2001 more wrongfully convicted people have been freed through DNA testing than anywhere else in the nation, is slowing to a trickle.  There are only so many cases where genetic evidence is available to test . . . The emphasis of the conviction integrity unit established by District Attorney Craig Watkins in 2007 is shifting toward challenging cases where there is no DNA to test, but where questions remain about an inmate’s guilt or innocence.”

The Curtis Flowers case represents all the legal flaws that led to wrongful convictions in the 254 DNA exonerations America has witnessed since 1989. If you want to see how these cases would have looked in the absence of DNA, the Flowers case is exhibit 1. DNA exoneration cases have made it possible to pinpoint the mechanics of wrongful prosecution: the manipulation of eye witness testimony, the abuse of inmate snitch testimony, the use of junk forensic science, a blatant attempt to maximize the number of white jurors, and prosecutorial tunnel vision. The Flowers case involves flagrant examples of each one of these elements.

2. Like most instances of racial injustice, the Flowers case is 10% evidence, 10% law and 80% sociology.  Three cases have placed tiny Winona, MS on the media radar screen: the 1937 Lynching of two black suspects seized by a mob from the Montgomery County Jail with the cooperation of the Sheriff; the brutal beating of Fannie Lou Hamer and three other civil rights activists by the Sheriff and his deputies in 1963, and the precedent-setting case of Curtis Flowers: 1996-2010. The racial bias in the criminal justice system changed very little in the twenty-six years between 1937 and 1963; how much changed in the thirty-three years between the Hamer travesty in 1963 and 1996?

3. The Flowers case demonstrates the corrosive effect of extremist politics on the judicial system. People like prosecutor Doug Evans and Lydia Chassaniol, (the State Senator sponsoring a bill designed to increase the chances of conviction in the Flowers case) freely associate with leaders of the paleo-conservative Council of Conservative Citizens without apology or regret. Chassaniol is a proud member of the organization. The CCofC is the successor organization to the Jim Crow era Citizen Councils and has never retreated from the old segregationist orthodoxy. Consider Article 2 of their “Statement of Principles”:

“We believe the United States is a European country and that Americans are part of the European people. We believe that the United States derives from and is an integral part of European civilization and the European people and that the American people and government should remain European in their composition and character. We therefore oppose the massive immigration of non-European and non-Western peoples into the United States that threatens to transform our nation into a non-European majority in our lifetime. We believe that illegal immigration must be stopped, if necessary by military force and placing troops on our national borders; that illegal aliens must be returned to their own countries; and that legal immigration must be severely restricted or halted through appropriate changes in our laws and policies. We also oppose all efforts to mix the races of mankind, to promote non-white races over the European-American people through so-called “affirmative action” and similar measures, to destroy or denigrate the European-American heritage, including the heritage of the Southern people, and to force the integration of the races.”

Thus far, the press corps in Mississippi is either unaware of these affiliations or considers them unworthy of mention.

4. The Flowers case proves that a prosecutor always gets another chance, and another, and another.  The 1986 case Batson v. Kentucky established the principle that prosecutors are allowed to eliminate minorities from the jury using “peremptory strikes” so long as they can give a “race neutral” justification for each strike. In the third Flowers trial in 2004, District Attorney Doug Evans used all fifteen of his peremptory challenges to exclude African-Americans from the jury. Three years later, the Mississippi Supreme Court, after concluding that Evans violated the “Batson rule”, used unusually strong language in their concluding remarks:

“Because racially-motivated jury selection is still prevalent twenty years after Batson was handed down and because this case evinces an effort by the State to exclude African-Americans from jury service, we agree that it is “necessary to reconsider Batson’s test and the peremptory challenge system as a whole.” While the Batson test was developed to eradicate racially discriminatory practices in selecting a jury, prosecuting and defending attorneys alike have manipulated Batson to a point that in many instances the voir dire process has devolved into “an exercise in finding race neutral reasons to justify racially motivated strikes.” When Batson was handed down, Justice Marshall predicted that ‘[m]erely allowing defendants the opportunity to challenge the racially discriminatory use of peremptory challenges in individual cases will not end the illegitimate use of the peremptory challenge.’ As this case has shown, Justice Marshall was correct in predicting that this problem would not subside.”

If Doug Evans was guilty of gross racial bias during the voir dire phase of the third Flowers trial, why is he still prosecuting Mr. Flowers?  Why didn’t the Attorney General’s office take over the prosecution of this case the minute prosecutorial bias was confirmed?

5. The Flowers case shows how race trumps objectivity. In 1994, two years before the Tardy murders, Stephen Bright, Director of the Southern Center for Human Rights in Atlanta, Georgia, criticized the unwillingness of jurists to admit the influence of racial bias in death penalty cases. “Some think racial discrimination is inevitable and impossible to prevent; others think the influence of race can be eliminated. The question must be answered, not avoided. If racial discrimination cannot be prevented, the death penalty should not be carried out. If discrimination can be eliminated, then it should be the highest priority of the courts. But to pretend that it does not exist, to deny a remedy, to deny even a hearing, is to give up on achieving the goal of equal justice under law. Tragically, that is what state and federal courts have done.”

In the 4th Flowers trial, all five African American jurors held out for acquittal while all seven jurors voted to convict.  Racial bias has dictated the outcome of all five Flowers trials?  But which side is getting it wrong, and why?