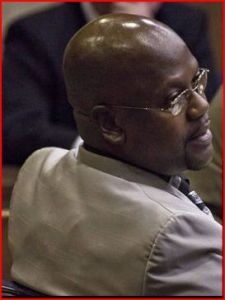 CNN’s Emanuella Grinberg did an excellent job of covering the final days of the Curtis Flowers trial from every conceivable angle.  Emanuella got her start in journalism with Court TV, so she has a good feel for courtroom dynamics.

One crime, six trials and a 30-minute guilty verdict

On the ninth day — Friday — Flowers was found guilty of four counts of murder in the July 16, 1996, shooting deaths of four people inside the Tardy family’s furniture store in downtown Winona.

The seven women and five men on the jury took just half an hour to resolve a case that has haunted the courts of Mississippi for 13 years.

“I’m not surprised by the verdict, given the makeup of the jury, but I am a little surprised by the speed,” said Alan Bean, who got involved in the case through his nonprofit group, Friends of Justice, which examines cases of suspected wrongful prosecutions.

Three times before, Flowers was found guilty, but the convictions were overturned by the appeals courts. He received two death sentences, which also were overturned.

On Friday, Mississippi justice seemed headed on a swifter course. Jurors heard evidence to help them decide whether Flowers, 40, should be punished for his crime with the death penalty.

But in court on Thursday, some folks seemed worn out by the long-running legal saga. A few jurors stared off into space. Members of the audience dozed off, while others slowly trickled out of the courtroom. Circuit Judge Joseph Loper occasionally wrung his hands as Flowers’ attorney questioned a witness.

Tardy Furniture’s storefront, located at the end of a row of dusty, shuttered businesses on Front Street, still bears the last name of its original owner, Tom Tardy, even though the family sold the World War II-era relic in 2004. But Mississippi’s courts have been slow to deliver justice for in the deaths of Bertha Tardy, the store’s owner, and employees Carmen Rigby, Robert Golden and Derrick “Bobo” Stewart.

Prosecutors alleged that Flowers, a former employee, stole a gun from his uncle’s car and shot Tardy because she had fired him two weeks before the killings and docked his pay for damaging a pair of golf cart batteries. He allegedly shot the others to eliminate witnesses, and then took money from the cash register, which elevated the offense to capital murder and made him eligible for the death penalty.

“You wonder if there’s ever going to be closure. By the time one trial’s over, we’re getting ready for the next,” said Randy Stewart, the father of 16-year-old Derrick Stewart. The star pitcher of Winona High School’s baseball team had started a summer job at Tardy’s the day before the shootings.

If history is any teacher, Friday’s verdict may not end things.

The earlier convictions were reversed, based on findings of prosecutorial misconduct in the first two trials and racial discrimination in choosing the jury in the third trial. The fourth trial ended in a hung jury, with panelists split 5-7 along racial lines. The fifth trial, in 2008, also ended in a mistrial after a lone black juror held out for acquittal.

The previous outcomes raised allegations from the defendant’s supporters that the prosecution is racially motivated. They say Flowers cannot get a fair trial in Montgomery County as long as whites outnumber blacks on the jury. This time around, one black juror and two black alternates were chosen.

The case came under broader national scrutiny after being featured on a blog run by Friends of Justice.

“I became interested in this case because virtually all the problems that have been leading to wrongful convictions are involved in this case, so I wanted to know how this prosecution was put together,” said Bean, who has visited Winona seven times in the past 14 months to reconstruct witness accounts of the shooting at Tardy’s.

A step in the right direction, according to Bean, would be to seat a jury that represents the racial diversity of Montgomery County, where about 45 percent of the population is black. But at the sixth trial, some blacks in the jury pool were dismissed because of personal ties to the defendant and his family, while others were excused because they said they would be unable to consider the death penalty.

A study released earlier this month by the Equal Justice Initiative, a nonprofit human rights and legal services organization based in Montgomery, Alabama, found that racial discrimination in jury selection is widespread and seemingly tolerated. Two years of research in eight Southern states, including Mississippi, revealed that racially biased use of peremptory strikes and illegal racial discrimination persists in serious criminal cases and capital cases.

The consequences, according to the initiative, are that “all-white juries tend to spend less time deliberating, make more errors, and consider fewer perspectives.”

Also, longstanding Gallup polling of support for the death penalty has found a consistent schism between blacks and whites, with 70 percent of whites favoring it compared with 40 percent of blacks.

Many in Winona, including the victims’ families, resent the suggestions that race is playing a role in the only known instance in recent history of a person standing trial six times for capital murder. They blame Friends of Justice for injecting “the race card” into the trial.

Many Winona residents believe that while the circumstantial evidence against Flowers is strong, their beloved town has moved beyond the era when police picked up civil rights activist Fannie Lou Hamer in 1963 and severely beat her.

“I would feel just as equally toward a white man as I do toward Curtis Flowers,” said Brian Rigby, who played baseball with “Bobo” Stewart and had just graduated from high school when his mother was killed.

I would feel just as equally toward a white man as I do toward Curtis Flowers.

He points out that a black man also died in Tardy’s showroom that morning. Robert Golden, a married father of two who had taken on a part-time job at Tardy’s for extra money, was shot twice in the head, his brother, Willie George Golden, said.

“It’s not easy. I’m sitting on two sides of the aisle,” he said, referring to the racial dynamics in the courtroom.

During the most recent trial, the pews behind the defendant have been mostly filled with black people, along with Bean and observers from his group, who are white. The rows behind the prosecution table consist primarily of whites, with the exception of Golden, a local reporter and the occasional member of the public.

“Curtis’ father — we used to hunt and fish together. When you grow up around people and you’re used to speaking to them and saying hello … This is not an easy thing for me,” Golden said outside of court on Wednesday. “No one says, ‘I’m sorry you lost your brother.’ There’s people in this town to this day who act like I haven’t lost anything.”

There’s people in this town to this day who act like I haven’t lost anything.

Whether racism is alive and well in Winona depends on who you ask in the small town, where a smile or a nod is customary when you pass someone, and Wednesday night means all-you-can-eat catfish at Willy’s off Interstate 52.

“They don’t call you n****r as much,” a black retired state employee said outside the courthouse this week. “It’s not as open as it was, but they still got their ways of keeping you on a different level.” He spoke on the condition that CNN not publish his name.

Several black people attending the trial said most in Winona’s black community believe Flowers is innocent, based on his reputation as an easygoing guy who like his father, the manager of a popular convenience store, sang in a gospel choir.

They also believe that the circumstantial evidence was not strong enough for a conviction.

Observers on the other side of aisle say Winona is a peaceful place that has earned a bad reputation because of the trial.

“Sure, Winona has its history, but that was a long time ago. Nowadays, blacks and whites work together in Winona, we pray together, we get together on holidays and celebrate together,” said Eunice Evans, a retired nurse who sat in on the trial. “It’s nothing like it used to be.”

Such debate presumably took place outside the notice of the jury, which was sequestered for the duration of the trial. Jurors were instructed by the judge to limit their knowledge of the case to what they heard from the witnesses in the courtroom.

Several prosecution witnesses testified that they saw Flowers the morning of the shootings, including a woman who told the jury that she saw him running from the store at about the time of the killings. To rebut her testimony, the defense called the woman’s sister, who said she was at her house that morning.

Another witness who worked at a now defunct garment factory with Flowers’ uncle testified that she saw Flowers in the factory parking lot near his uncle’s car before the shootings. The uncle, Doyle Simpson, testified that a .380-caliber pistol was stolen from his car that morning.

A prosecution firearms analyst told jurors that he was able to match shell casings from the crime scene to spent rounds that Simpson provided to investigators, which he claimed were fired by the stolen gun. A firearms expert for the defense, however, testified that he could not arrive at the same conclusion without having access to the murder weapon or Simpson’s gun, neither of which was ever recovered.

The prolonged legal ordeal has turned those involved into amateur experts in the justice system. Knowing from previous experience that a death sentence triggers an automatic appeal, the victims’ families got together before the fourth trial and asked prosecutor Doug Evans to take the death penalty off the table.

If Flowers were convicted and sentenced to life without parole, they reasoned, he would have to convince a higher court to consider his appeal based on its merits.

“I support the death penalty, but it’s not gonna bring Bobo back,” said Stewart’s brother, Dale, over lunch Thursday at the Mexican restaurant in Winona.

“It would be worth it for him to get life so we can move on.”