This is the 4th installment of a series.  The first three segments can be found here, here and here.

In 1962, when Doug Evans was attending junior high school in Grenada, Mississippi, a black man named James Meredith enrolled at the University of Mississippi sparking days of riots aided and abetted by Mississippi State Troopers. Four years later, when Doug Evans was in high school in Grenada, James Meredith launched a march against fear, heading south from Memphis to Jackson. Shortly after setting out, Meredith was shot in the leg by a sniper and was unable to continue. Civil Rights leaders like Martin Luther King and Stokely Carmichael rushed to Mississippi to pick up where Meredith had left off.

When the marchers arrived in Grenada on June 15, 1966, City Manager John McEachin explained the situation to a reporter: “All we want is to get these people through town and out of here. Good niggers don’t want anything to do with this march. And there are more good niggers than sorry niggers.”

It didn’t work. The morning after an impassioned sermon by Dr. King, 200 people marched to the courthouse to register to vote. An American flag was set up next to the Civil War Memorial on the square. When the March Against Fear continued south, the registration fight continued.

Soon black young people were demanding to be seated on the main floor of the local theatre. And in the fall, mass meetings were held at the town square every night for months on end demanding the vote and the integration of Grenada schools. Black residents were even trying, unsuccessfully, to attend white Baptist churches.

These mass meetings and marches sparked an ugly backlash from local authorities. When 48 marchers were arrested, a federal judge told the Mississippi State Troopers to stop interfering with peaceful assemblies. For months, black protesters marched from a church to the city square every evening where they were met by as many as 1,000 angry whites.

The State Troopers treated the black protesters like anarchists and common criminals. Listen to this report from August 9, 1966:

Under a bombardment of cherry bombs, rocks, and bottles we manage to reach the North side of the green. White men charge into us, beating people with pipes and sticks. Knowing we will be charged with felony assault if we fight back, we maintain nonviolent discipline. But we cannot hold our ground, and are forced to retreat. There are about 50 state troopers on either side of the whites, they are waiting to bust us if we hit back, but they do nothing to halt the white attackers. We fall back to the north side of the square. The attacks continue. One of the cops throws a tear gas bomb into our line.

The situation became even more inflamed when 450 black school children attempted to enroll in two white Granada schools. Walking to class in twos and threes, the children were attacked by white mobs organized by the local KKK wielding clubs, bicycle chains, bull whips and pipes.

In 1970, the public schools of Mississippi were integrated by the US Supreme Court and private “segregation academies” sprang up all over the state. This is the world in which Doug Evans was raised. 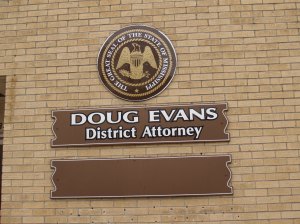 In 1991, the same year that Larry Stewart became Swisher County Sheriff and Reed Walters became LaSalle Parish prosecutor, Doug Evans became a District Attorney with jurisdiction in five counties. His office was located in Granada, just a few blocks from the town square that had seen so much unrest when Evans was a young man.

Was a youthful Doug Evans a member of the white mobs that turned Granada’s courthouse square into a battle field in 1966?  I don’t know, and it doesn’t matter.  Like all of us, Mr. Evans has been marked, empowered, and crippled by his environment.

During his 1991 election campaign, Doug Evans was a regular speaker at conferences organized by the Council of Conservative Citizens, a white supremacy group cobbled together in 1985 from old Citizen Council mailing lists. Gordon Baum, the current leader, calls the organization “the pre-eminent voice of white America.”

Doug Evans addressed the CCC in 1992, the same day that Senate Majority Leader Trent Lott spoke to the group. Lott was forced to disown the organization when his close ties to the group became an issue in 1998. Doug Evans has never been asked to account for his public embrace of white supremacy. 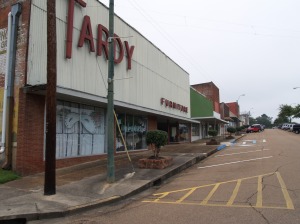 On July 16, 1996, exactly thirty years after the racial strife in Granada, Doug Evans learned that four people had been murdered at the Tardy Furniture store in Winona, a town of 5,000 twenty miles to the south. All four victims died from a single bullet to the back of the head.

It sounded like a contract killing and the community was rife with rumor. Years earlier, the future Bertha Tardy had conducted an affair with Tom Tardy while his first wife was still alive. Tom’s sons from the first marriage had always resented their stepmother, especially when Tom grew old and senile and the 59 year-old Bertha took over the business.

Carmen Rigby was the business manager at Tardy furniture. Her husband was a life insurance salesman and it was widely rumored that he had taken out a high-dollar policy on Carmen shortly before her death. It was also reported that Carmen had left her husband shortly before the murders.

All of this was rumor, of course, and it would stay that way—Doug Evans made no attempt to rule out Tom Tardy, his sons, or Carmen Rigby’s husband as possible suspects. It was assumed that church going folk don’t pay to have their loved ones bumped off. To interview people still deep in grief would simply add insult to injury. Consequently, the obvious questions were never asked.

Fortunately for Doug Evans, Bertha Tardy’s daughter, Roxanne Ballard found a check on her mother’s desk for $82.52 written to an ex-employee named Curtis Flowers. On his first day of work, several lawnmower batteries had fallen off a delivery truck Curtis was driving and Bertha said she would be deducting several hundred dollars from his next pay check. Frustrated by the prospect of working a full week without pay, Curtis didn’t return to work after the July 4th holiday.

In Winona’s black community, Curtis Flowers was known as a shy but fun-loving gospel singer who had never been in trouble with the law. On the white side of the tracks, however, he became a cold blooded killer willing to send four innocent people to their graves over eighty-two dollars and fifty-two cents.

At his trial in June, it became clear that investigators singled out Curtis Flowers as their only suspect within two hours of the crime. All they had to go on was Roxanne Ballard’s assurance that Curtis was the killer and that was enough.

You may be wondering why a 1996 murder was tried fourteen years after the fact. Actually, Curtis Flowers has now been to trial six times on the same evidence. Three cases have been overturned by the Mississippi Supreme Court due to prosecutorial misconduct and two trials ended in hung juries.

Shunting the worst crime in Winona history into the cold case file was simply not an option. So Doug Evans sent his investigator door to door on the black side of town with a picture of Curtis Flowers and a poster announcing a $30,000 reward. Black residents were asked if they had seen the suspect pass by their home the morning of the Tardy murders.

It took seven months to come up with a handful of eye witnesses. A woman who initially described seeing a short stranger was repeatedly called down to the police station until she finally confirmed the official story. At five foot ten, Flowers didn’t qualify as “short” and was hardly a stranger; the witness had heard him singing with his father’s gospel group on many occasions over the years.

Another witness has been in and out of mental hospitals on several occasions since this legal saga began. During one trial, she had to be transported from the mental hospital to the courthouse so she could testify.

A third witness says she saw Flowers running from the Tardy Furniture store, but her testimony is contradicted by the man who gave her a ride that morning and by several family members who insist she was with them at the time.

Another witness testifies that she saw Curtis leave his apartment on two occasions the morning of the crime. Last month, this witness was convicted in federal court for claiming over $600,000 in false income tax deductions.

This news came too late for Curtis. In June of this year he was sentenced to death by lethal injection.

Only once has Curtis Flowers been tried by a true jury of his peers. In trial four, all five black jurors held out for acquittal while all seven white jurors voted to convict.

One thought on “Making a stand in Grenada”