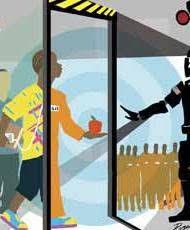 A recent report published by the Justice Policy Institute (JPI) reveals that punitive approaches to student discipline do little to curb violence and crime in schools.

JPI points out that the adoption of punitive discipline policies (such as “zero tolerance” policies) in the 1990s led to dramatic increases in the presence of law enforcement in schools:

“In order to enforce zero tolerance policies, there was a concurrent increase in surveillance and security measures in schools that included metal detectors, locker checks, security cameras, and law enforcement or security personnel. For example the regular presence of security guards increased 27 percent between 1999 and 2007.”

“SROs are typically accountable first to the police department and then to the school, which might pay part of an SRO’s salary or administrative costs. Nonetheless, a handbook for recruiting and retaining SROs, says that an SRO can overrule a school administrator who wants to prevent the arrest of a student.”

Although SROs are trained in law enforcement, there is no policy requiring SROs to be trained to work with students.

JPI argues that school violence and theft have been steadily decreasing over the years. In several studies of schools that have decreased law enforcement presence, there have been no subsequent increases in school crime. In fact, school violence and crime often decrease in these cases. Thus, there is no clear relationship between the presence of SROs in schools and increased school safety.

Research suggests that referring kids to the juvenile justice system increases the likelihood that they will drop out of school:

“Within a year of re-enrolling after spending time confined, two-thirds to three-fourths of formerly incarcerated youth withdraw or drop out of school.”

2 thoughts on ““Education under arrest: The case against police in schools””