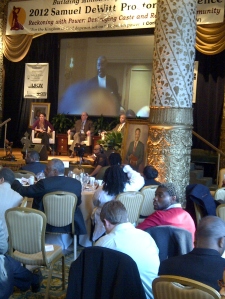 Since Ronald Reagan rode to power on a wave of white racial resentment, programs designed to benefit America’s marginalized citizens have been treated as a political pinãta by conservatives and avoided as a liability by . . . well, non-conservatives.  No one dared identify as a liberal.  The L-word had become toxic.

There is another L-word: “legalization”.

Unless you are a big fan of Ron Paul, you have probably never been exposed to a compelling argument for legalizing drugs.  Libertarians support the legalization of drugs because (a) they don’t think the government should regulate hardly anything, (b)drug prohibition, like the prohibition of alcohol, is a futile attempt to repeal the law of supply and demand, and (c) our counter-productive war on drugs eats up billions of tax dollars.

Today, at the Samuel DeWitt Proctor Conference, three of America’s leading authorities on the drug war wrestled with the other l-word.

Michelle Alexander told us she was inching toward support for drug legalization but remained on the fence.  The author of the most successful criminal justice reform book in the history of publishing is committed to ending the war on drugs and the policy of mass incarceration.  Should legalizing drugs be part of the program?  She’s still thinking about it.

Neill Franklin, a 23-year veteran with the Maryland State Police who has worked as an undercover narc and as the head trainer for drug enforcement, became a proponent of legalization after seeing too many police officers and innocent citizens die defending a failed policy. Franklin  now leads Law Enforcement Against Prohibition (LEAP) as the organization’s executive director.

Ethan Nadelmann, the founder and executive director of the Drug Policy Alliance, was one of the first educated and articulate Americans to endorse drug legalization.  The son of a Jewish Rabbi, and the grandson of an Auschwitz victim, Nadelmann started thinking about drug policy because, during college, he smoked marijuana, “and I liked it.”  He liked alcohol too, “but they were locking people up for using pot.”

The more he studied the matter, Nadelmann told us, the more he realized that “a thoughtful, scientific, economically informed analysis” took you one place, while “politics and culture” take you somewhere else.  Nadelmann praised former Baltimore mayor, Kurt Schmoke, as the one public official in America who had the guts to call for legalization when legalization wasn’t cool.

Gradually, Nadelmann came to see the drug war as racial justice issue.  “If you were to randomly stop black, white and Latino young people on the street and search them for drugs, he said, you would find just as many white kids with a joint as anybody else.  But we’re arresting five, six, seven times as many black kids.  After a while you have to ask what’s going on.”

“Anytime a majority needs to impose its particular morality on a minority,” Nadelmann said, “you’ve got trouble . . . Ultimately, this is not just about drugs; it’s about how we treat the ‘other’.”

This being a conference of organized for and by people of faith, the three presenters talked about the relationship between faith and public policy.  At its heart, Alexander said, Christianity is about care, concern and compassion for broken people.  “I feel a compulsion to shatter the myth that some of us are not worthy of care, compassion and concern,” she said.  “Once you dispel that myth, the whole [drug war] system begins to crumble.”

Franklin was driven to his present work by violence.  A family of seven was murdered because a drug dealer learned the mother was cooperating with the police.  “So he torched her home.”  His first impulse, of course, was to bring down the dealer.  But the more he thought about it, these seven innocent people, and a long list of brave police officers, had become unwitting martyrs to a failed policy.

“This is my ministry,” Franklin says; “to explain how law enforcement has become (either wittingly or unwittingly) an accomplice in this problem.”  Backing away from the war on drugs is insufficient, he insists; only legalization will stop the street violence.

But legalizing drugs, by itself, wouldn’t be enough for Franklin.  “Before you can have solid communities you need solid families,” he explains, “and the war on drugs has been ripping black families apart.”  So, when drugs are legalized, “we need to make sure that the money saved is invested in our communities.”  (Here, Franklin and Ron Paul part company).

Finally, Michelle Alexander, the moderator of this discussion, asked Ethan Nedalmann what he meant by “legalization”.  Are we talking about selling crack down at the 7-11, or what?

Nadelmann gave the best “elevator talk” on the subject I have ever heard.

“Three things,” he said.  “Marijuana is the first issue.”  This simple statement elicited raucous laughter from a room filled with preachers.  We all knew where he was going.  Marijuana is far less dangerous than alcohol and should be just as legal and just as regulated.

“Number two, with regard to any drug, possession of small amounts  for personal use should never be punished.  Harm done while high is another issue.  If you get behind the wheel when you’re under the influence you can’t use the fact that you were high as an excuse.”

“Number three, there are those who will use whether the stuff is legal or illegal–offer them treatment; try to get them past their addiction.  But if they persist, if their drug of choice is their lady-love and they can’t imagine life without it, give them a safe place to use their drug.  You can’t take it home; but you can get what you want at the clinic.”

In other words, kids will NOT be buying crack at the corner store; only serious addicts will be interested.  And Nedelmann believes that, for many addicts, clinics could be the first step to getting free.  The drug isn’t really the addiction, he says.  A lifestyle revolving around getting drugs and staying high is the addiction.  When you make it too easy, some users will, for the first time, step back and take a long, hard look at what they’re doing to themselves.  “When addicts are treated like human beings,” he said, “their eyes open.”

3 thoughts on “The other L-word”