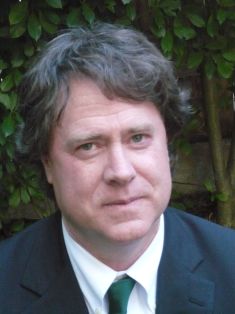 I first encountered this story in front of a recording studio in Austin, Texas.  “My mother sent me this,” attorney Jeff Frazier told me.  “It’s a really refreshing perspective.  He says he’s for gay marriage because he’s a Christian!”  I looked at his cell phone and was delighted to see Mark Osler’s name.

In this piece written for the CNN blog, Osler doesn’t argue that the Bible endorses homosexuality; he says the life and message of Jesus is a compelling argument against withholding any holy sacrament (marriage, baptism) from anybody.

Mark couldn’t have made this argument so neatly when he was a Baptist at Baylor; but now that he’s wandered down the Canterbury Trail it makes a lot of sense.  In fact, the baptism-marriage connection is breathtaking in its simplicity.  Why hadn’t I thought of that?  Probably because I’m still a Baptist.

By Mark Osler, Special to CNN

I am a Christian, and I am in favor of gay marriage. The reason I am for gay marriage is because of my faith.

What I see in the Bible’s accounts of Jesus and his followers is an insistence that we don’t have the moral authority to deny others the blessing of holy institutions like baptism, communion, and marriage. God, through the Holy Spirit, infuses those moments with life, and it is not ours to either give or deny to others.

A clear instruction on this comes from Simon Peter, the “rock” on whom the church is built. Peter is a captivating figure in the Christian story. Jesus plucks him out of a fishing boat to become a disciple, and time and again he represents us all in learning at the feet of Christ.

During their time together, Peter is often naïve and clueless – he is a follower, constantly learning.

After Jesus is crucified, though, a different Peter emerges, one who is forceful and bold. This is the Peter we see in the Acts of the Apostles, during a fevered debate over whether or not Gentiles should be baptized. Peter was harshly criticized for even eating a meal with those who were uncircumcised; that is, those who did not follow the commands of the Old Testament.

Peter, though, is strong in confronting those who would deny the sacrament of baptism to the Gentiles, and argues for an acceptance of believers who do not follow the circumcision rules of Leviticus (which is also where we find a condemnation of homosexuality).

His challenge is stark and stunning: Before ordering that the Gentiles be baptized Peter asks “Can anyone withhold the water for baptizing these people who have received the Holy Spirit just as we have?”

None of us, Peter says, has the moral authority to deny baptism to those who seek it, even if they do not follow the ancient laws. It is the flooding love of the Holy Spirit, which fell over that entire crowd, sinners and saints alike, that directs otherwise.

It is not our place, it seems, to sort out who should be denied a bond with God and the Holy Spirit of the kind that we find through baptism, communion, and marriage. The water will flow where it will.

Intriguingly, this rule will apply whether we see homosexuality as a sin or not. The water is for all of us. We see the same thing at the Last Supper, as Jesus gives the bread and wine to all who are there—even to Peter, who Jesus said would deny him, and to Judas, who would betray him.

The question before us now is not whether homosexuality is a sin, but whether being gay should be a bar to baptism or communion or marriage.

The answer is in the Bible. Peter and Jesus offer a strikingly inclusive form of love and engagement. They hold out the symbols of Gods’ love to all. How arrogant that we think it is ours to parse out stingily!

I worship at St. Stephens, an Episcopal church in Edina, Minnesota. There is a river that flows around the back and side of that church with a delightful name: Minnehaha Creek. That is where we do baptisms.

The Rector stands in the creek in his robes, the cool water coursing by his feet, and takes an infant into his arms and baptizes her with that same cool water. The congregation sits on the grassy bank and watches, a gentle army.

At the bottom of the creek, in exactly that spot, is a floor of smooth pebbles. The water rushing by has rubbed off the rough edges, bit by bit, day by day. The pebbles have been transformed by that water into something new.

I suppose that, as Peter put it, someone could try to withhold the waters of baptism there. They could try to stop the river, to keep the water from some of the stones, like a child in the gutter building a barrier against the stream.

It won’t last, though. I would say this to those who would withhold the water of baptism, the joy of worship, or the bonds of marriage: You are less strong than the water, which will flow around you, find its path, and gently erode each wall you try to erect.

The redeeming power of that creek, and of the Holy Spirit, is relentless, making us all into something better and new.

Mark Osler is a Professor of Law at the University of St. Thomas in Minneapolis, Minnesota (and a member of the Friends of Justice board).

2 thoughts on “Osler: The Christian case for gay marriage”