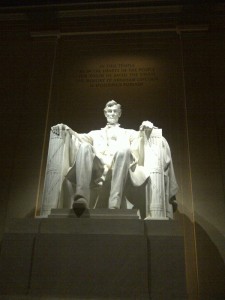 A few hours ago I walked from the Supreme Court building to the new Martin Luther King Jr Memorial and back.  Along the way, I stopped by the Lincoln Memorial, wandering among the perennial tourists.  A pudgy white boy of nine or ten, stood on the steps beside me.  “Hey, Larry,” he called to his friend, “‘I have a dream.'”

Looking back across the reflecting pond to the Washington Memorial, I remembered that day, almost fifty years ago now, when Mahalia Jackson and Peter, Paul and Mary sang and Martin delivered his iconic speech.  The great divide in American politics and religion is between those who remember that day in 1963 with a aching veneration, and those who regard Martin’s Dream Speech with an odd mixture of respect, dread and discomfort.

I grew up with King’s speeches.  In my native Canada, the great civil rights leader was regarded as latter day prophet, a civil rights hero.  My generation of Canadian youth defined itself in opposition to America and its war in Vietnam.  We were impressed by America, a nation with ten times our population and fifty times our military and economic clout.  There was no sense that the great nation to the south meant us any harm.  But we were mystified by Jim Crow, and Vietnam, and cold war zealotry.  At the height of the civil rights movement, two teachers from my home town of Yellowknife in the Canadian Northwest Territories took a summer trip through the American South.  They told us of an encounter with a lovely woman in Georgia who made her Negro maids eat in the kitchen because it was improper for white and black people to share a meal.  Our teachers were appalled by such sentiments.

Canadians, of course, have our own species of bigotry but, like the woman from Georgia, we were largely blind to the sins that beset us.

I grew up venerating Martin Luther King, Jr.  America’s most prominent prophet was the antithesis of everything that bothered me about conventional Christianity.  His religion was practical and this worldly, yet it was steeped in a longing for a better world.  King called it the Beloved Community; Jesus called it the Kingdom of God.  I was too young to understand either term, but I felt the reality, I was hooked by the dream.  I wanted to live in that better world where all men and women were cherished children of God, where love drove out hate, where love of country was tempered by a deeper love for all humankind.

But here’s the problem.  You can’t long for the Beloved Community and embrace the myth of American Exceptionalism.  They are mutually exclusive visions.  Dr. King loved the principles on which America was founded.  His dream, he said, was rooted in the American Dream.  America is exceptional because we dream exceptional dreams.  The principles on which our nation is founded are noble, but it is our tragic failure to live up to our exceptional expectations that haunted King.  We listened to him because he shared our ideals; we hated him because he expected us to take them seriously.

This election is all about how we define American Exceptionalism.  Is our exceptionalism a matter of essence or aspiration.  Is it about who we are or about who we dream of becoming?  Mitt Romney seems to believe it is about who we are; Barack Obama, in the prophetic tradition of Dr. King, believes it is about who aspire to be.  Like any effective politician, Obama tells us how wonderful we are, but as a Black American he can only take the flattery so far.  There is always a “but,” a qualification, an awareness that all is not well, and that all has never been well in our America.  We are a troubled people with a troubled past.  We have built sturdy houses on foundations of solid principle, but we live in the tool shed.

The sun was getting low in the sky as my journey began last evening.  I had been attending a meeting at the Methodist Building, just across the street from the Supreme Court.  That gorgeous slice of architecture is being renovated and an enormous tarp had been draped over the facade.  Not wishing to disappoint the tourists, a life-size portrait of the Supreme Court has been superimposed on the tarp so that, unless you look closely, you think you are seeing the real thing.  Is this pretense a kind of American parable.  Is the slogan “Equal Justice for All,” a rock solid promise, or do we get the justice (and the opportunity) we can pay for?

It’s a bit of both, really.  We killed Martin King just as we killed Abraham Lincoln a century earlier, but we honor their memory in spectacular fashion.  The Martin Luther King Memorial impressed me.  On either side, quotations from his great speeches are carved in walls of granite.  And it isn’t just the domesticated MLK of popular imagination we encounter in these quotations.  Consider this: “If we are to have peace on earth, our loyalties must become ecumenical rather than sectional.  Our loyalties must transcend our race, our tribe, our class, and our nation.”

Do we really believe that?  The general thrust of our politics suggests otherwise.  Politicians appeal to race, tribe, class and nation intentionally and effectively.  There is little transcendence in a paid political ad.

But when we carve words into granite on the National Mall, we make excellent choices.  The Gettysburg address adorns the walls of the Lincoln Memorial, and now the prophetic rhetoric of Dr. King is chiseled in stone.  This is what makes us exceptional: not that we are a great people, but that, in our deepest heart, we have never stopped longing for greatness.

5 thoughts on “Haunted by America”