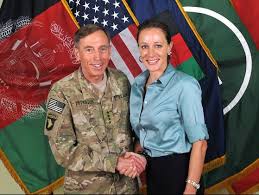 Apart from America’s love affair with the military, the rock star-groupie relationships between women like Paula Broadwell and Jill Kelley and generals like Petraeus and John Allen would be hard to believe.  Why are these women fighting over these men?  And why are we so shocked to learn that a talented egoist like Petraueus would be seduced by an adoring and beautiful biographer like Ms. Broadwell?  Why are we on pins and needles as the email relationship between Allen and Kelley is probed for evidence of romantic dalliance?

Is any of this stuff really our business?  And why should the fact that grown, overworked, highly stressed, egotistical military men are attracted by adoring women surprise us?  Are these not mortals?  Sex doth make fools of us all, and powerful men like David Petraeus are subject to far more temptation than most males.  Hubris involved, to be sure.  What sort of men and women do we think make it to the top of the American meritocracy?  Self-effacing saints?  No, to attain power you must want it very, very badly.

During World War II, Dwight Eisenhower carried on an affair with his Irish driver, Kay Summersby.  Many claim that the two, while in love, were never intimate.  But when a grown man and a mature woman allow their feelings for one another to cross the line between friend and lover, we all know what happens.  The trick is to keep from crossing that line in the first place.

Petraeus crossed the line.  So did Eisenhower.  But no one ever suggested that Dwight D. should resign the presidency because of the rumors associating him with his driver.

If it weren’t for the Petraeus scandal, we might be talking about Staff Sergeant Robert Bales, the American soldier accused of massacring sixteen helpless Afghan civilians, most of them women and children.  When taken into custody, Bales is reported to have said, “I thought I was doing the right thing,” and “It’s bad. It’s bad. It’s really bad.”

The military is asking for the death penalty.  If ever a case called for the ultimate punishment, this looks like the one.  But why did Bales commit an act that he acknowledged to be “really bad?” and why did it seem, even for an instant, like “the right thing” to do?  What kind of skewed perspective are we dealing with?

During the “Good War” (WWII) the typical soldier was a hapless GI grunt slogging through the mud.  A hero, to be sure, but very much a normal human being like the rest of us.  The modern soldier, exemplified by the Special Operations forces like the Navy Seals who took out Osama bin Laden, are not ordinary GI Joes.  They are celebrated as living, breathing action figures–larger-than-life heroes.  They know things we don’t know and they do things we can’t do.  Most of the time we have no way of knowing where they are or what they’re up to.  We venerate these men  and women largely because few of us (and hardly anyone active in political life) have shared their experience.

Do we really know what these people go through?  During the Cold War, few soldiers found themselves in fire fights or exposed to murderous IEDs on a regular basis.  For most, military life was more tedious than terrifying.

That has changed.  In one month last year, 186 active soldiers committed suicide.  On average, there is one military suicide per day–that’s twenty times the civilian rate.

Soldiers are returning from combat dripping with PTSD.  Not all of them, to be sure, but far more than we care to imagine.  Many are unfit for the job market; they find it impossible to return to their domestic relationships.  Alcohol and drug addiction is rife within this population.  For many, prison or personal tragedy provide the final act of a long and tortuous drama.

I am not defending Mr. Bales, but the link between his traumatic experience as a soldier and the bizarre cruelty he unleashed on innocent and defenseless non-combatants should be patently obvious.  He is responsible for his actions; but so are we.  We sent him to Afghanistan.  We placed a weapon in his hand.  Our misplaced priorities and failed judgments subjected him to daily trauma.  We altered the chemistry of his brain in ways none of us can comprehend.

Why are men like David Petraeus never held accountable for the obvious failure of our military mission in places like Iraq and Afghanistan?  It isn’t just that, over a decade after 9-11, we have abandoned the fiasco in Iraq and are fixing to slink away from Afghanistan.  And it isn’t just that we should have seen all this coming (although we should have).  The real horror is the pathetic string of tragedy our vainglory has unleashed.

B.J. Smith is a 58 year-old military veteran who served nine years as a marine.  In the Spring of 2011, Smith’s next door neighbor, a severe drug addict whom B.J. (a devout Christian with a Masters of Divinity Degree) was attempting to “bring to the Lord”, knocked on the door.  Brandishing a knife, Robert Fowler, demanded money.  Fearing for his life, Smith pulled his pistol and kept firing until, in his words, “the deadly threat was stopped, just like the Marines taught me.”

A prosecutor in Port Angeles Washington filed murder charges, arguing that Smith kept firing his weapon after Fowler was no longer a threat.  The case hasn’t gone to trial, but suppose the prosecutor is right.  B.J. Smith is a disabled military veteran with a diagnosis of PTSD.  Should we be surprised that a military veteran in such a fragile emotional and mental state reverted to military mode when his life was threatened?

I am not suggesting that the instructor who taught Mr. Smith to keep firing until “the deadly threat is stopped” should be charged as an accomplice in this case.

I am suggesting that we treat men like David Petraeus not as rock stars but as ordinary public servants.

I am suggesting that politicians who have never served a day in the military should be held accountable for blithely consigning brave young people to the hell of avoidable combat.

I am suggesting that the men and women who bear the physical and emotional scars of years of life-threatening trauma should receive special consideration from prosecutors.

And I am suggesting that we all admit, candidly and with contrition, that our vainglorious war-lust has unleashed a million demons into the world.

I am not a pacifist–or at least not a very consistent one.  Confronted with genuine threats from genuinely evil people we must defend ourselves.  On rare occasions, we should be prepared to defend innocent people in other parts of the world, especially when our national self-interest is not at stake.

But we must understand that William Tecumseh Sherman wasn’t kidding when he opined that “war is hell.”  It is.  Always.  When we send our sons and daughters to fight our battles, we are consigning them to the fires of hell.  We should not be surprised when they can’t live with the terrors to which we have subjected them.

So let’s all just forget about Petraeus and Broadwell.  We’ve all seen that picture a thousand times and the plot should be familiar by now.  And let’s give a whole more thought to folks like Robert Bales and B.J. Smith who learn to kill so we can get on with our safe, pleasant lives.

2 thoughts on “The military scandal nobody wants to talk about”