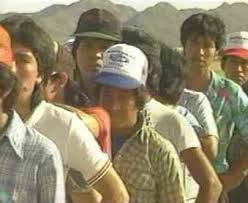 Daniel Kowalski provides a much needed corrective to much of the political blather surrounding the immigration debate.  The biggest myth about the immigration line is that most people who want to live in the United States have a line to get in.  They don’t.

I was particularly struck by this bold statement:

Is there a national ethos of civil and human rights?  The anti-immigrant movement, and much of the historical information Kowalski provides in this essay, suggest that two equally powerful ethoses (ethi?) are vying for the upper hand.  This explains why our immigration policy is so radically unfair and why no politician dares tell the truth.

Five myths about the immigration ‘line’

Daniel M. Kowalski is a senior fellow at the Institute for Justice and Journalism and the editor of Bender’s Immigration Bulletin. He practices citizenship and visa law in Austin at the Fowler Law Firm.

The “line” of people seeking American citizenship or legal status has become an integral part of our immigration debate. In a speech Tuesday, President Obama said that undocumented immigrants should go to “the back of the line” behind those who are going through the process legally. The immigration reform blueprint presented a day earlier by a group of senators contained the same requirement. But misinformation about this line abounds.

The federal government has issued more than 1 million green cards per year, on average, for the past five years. But there are several lines — which one immigrants end up in depends on whether they have a job or family in the United States.

There are four family-based categories for many relatives, called “preferences,” and five based on employment. The number of green cards issued through each is limited by country of origin, but there is no cap for “immediate relatives” — spouses of U.S. citizens, U.S. citizens’ unmarried children under age 21 and parents of adult U.S. citizens over 21.

Immigrants and their lawyers track their “place in line” in the State Department’s monthly Visa Bulletin, which lists cut-off dates for each preference and country. For example, the February 2013 bulletin lists EB-1 “priority workers” — superstars in their fields, such as rock stars and neurosurgeons — as “current,” meaning they are likely to wait just the four to six months it takes to prepare visa paperwork and schedule a consular interview.

Most of the nation’s 11 million undocumented immigrants would love to get in line if they could. They remain without papers because they don’t fit into any visa preference or because the wait is just too long. Without a relative to petition for them under a family-based preference or a job that fits into an employment-based category, there’s no line to enter.

Millions of low-wage service, industrial, manufacturing and construction jobs are filled by unauthorized workers who don’t qualify for visas because the Labor Department won’t certify a shortage of “U.S. workers” — citizens, green-card holders, refugees and others with work authorization — in those occupations. The department claims there are plenty of U.S. workers available, but talk to the owner of a landscaping company who spends thousands of dollars annually on lawyers to secure temporary H-2B visas for gardeners, and she’ll tell you that she can’t get American workers to apply for the jobs or stick with them. (One could argue that the prevailing wage for landscapers — roughly $12 per hour now in Central Texas — is the problem.)

3. Once you are in line, the wait is not too long.

In some visa categories, the wait can be decades. If the line is too long, would-be immigrants might break the law by, for example, sneaking over borders or overstaying student visas. People can’t be expected to wait decades for permission to work or live near their loved ones.

The Visa Bulletin provides a rough prediction of how long the wait will be in any given line. However, the fixed number of visas for each preference, plus increasing demand, ensure that the lines only get longer. For example, one family-based preference — for brothers and sisters of adult U.S. citizens — for immigrants from the Philippines is stuck at June 1, 1989. That means that a Filipino U.S. citizen trying to get her sister legal status would have had to file her petition on or before June 1, 1989, for the petition to be heard today. Based on monthly calculations of supply and demand, the visa office moves this cutoff date forward only a few days per month. The waiting period could be 30 years or more for these Filipino siblings.

4. If you broke the law, it’s only fair that you go to the back of the line.

If the line is relatively short and an immigrant has not lived long in the United States, that might be fair. But if, as Obama has pointed out, an immigrant was brought here illegally as a child, faces a decades-long wait and knows no other country, what’s fair about going “home” to a nation she doesn’t remember to wait for permission to return?

5. There’s no way to make the line shorter.

For more than 100 years, our country had no numerical visa quotas. Every limit we have put on the number of green cards has been arbitrary, driven by fear more than facts. In 1882, for example, Congress passed the Chinese Exclusion Act, which barred almost all Chinese from immigration or naturalization. This shameful, race-based law was not repealed until 1943.

In 1921, Congress enacted the first quotas based on the racist conclusions of the Dillingham Commission Report, limiting admission of immigrants to a fixed percentage of the foreign-born from each country who were already in the United States as of 1910. Later, the date was pushed back to 1890. This formula favored those of British descent and discriminated against Southern and Eastern Europeans. These quotas were not abolished until 1965.

For comprehensive immigration reform to work, Congress will have to substantially increase the number of green cards available each year in every visa preference. This may mean, for example, allowing a one-time surge of visas to wipe out the backlog, then doubling or tripling some quotas. If we keep our system as it is, we will be spending more on fences, drones, border guards, immigration courts and deportation officers.