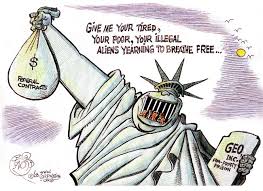 But it is the federal prison system, thanks largely to almost invisible programs like Operation Streamline, that is the real sugar daddy for one of America’s creepiest industries.  Since 2005, when the feds started prosecuting the folks detained at the border for illegal entry or illegal re-entry, 400,000, largely Latino detainees spend time in federal prisons and detention centers every year.  Latinos comprise 16% of the American population and over 50% of federal prisoners.

This is why Friends of Justice speaks of a punitive consensus that drives both mass incarceration (which disproportionately impacts African Americans) and the immigration system (which affects Latinos).  When we talk about the immigration and criminal justice systems we are dealing with two different breeds of the same species.

This quote from the Annual Report of the Corrections Corporation of America (CCA) tells you everything you need to know about the private prison industry’s dependence on mass incarceration.

Our growth is generally dependent upon our ability to obtain new contracts to develop and manage new correctional and detention facilities. This possible growth depends on a number of factors we cannot control, including crime rates and sentencing patterns in various jurisdictions and acceptance of privatization. The demand for our facilities and services could be adversely affected by the relaxation of enforcement efforts, leniency in conviction or parole standards and sentencing practices or through the decriminalization of certain activities that are currently proscribed by our criminal laws.

As this NPR report from last year demonstrates, private prisons may be a good deal for a town if they stay full; but if they stand half empty you’ve got a big problem.  John Burnett sums it up like this:

The packages look sweet. A town gets a new detention center without costing the taxpayers anything. The private operator finances, constructs and operates an oversized facility. The contract inmates pay off the debt and generate extra revenue.

The economic model works fine until they can’t find inmates.