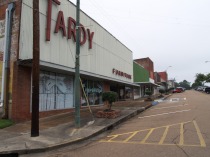 Doug Evans investigation and prosecution of the infamous 1996 Tardy murders have elicited some strong statements over the years.

The Mississippi Supreme Court has opined that Evans’ desperate attempt to exclude Black people from the jury is the most flagrant example of racially biased jury selection they have ever witnessed.

Robert Johnson, former chief of the Jackson, Mississippi police department, called the investigation that led to Mr. Flowers’ arrest “the worst investigation I have ever seen.”

Curtis Flowers has now been tried six times for the same crime with the state using the same evidence, the same witnesses and the same strategy every time.  Three guilty verdicts have been reversed by the Mississippi Supreme Court because of gross prosecutorial misconduct.  On two other occasions, juries split along racial lines.  In the fourth trial, for instance, all five Black jurors voted to acquit while all seven White jurors were willing to convict.

Prosecutor Doug Evans, has a case he can sell to white jurors.  But Black jurors aren’t buying.

How do we account for this gap in perception?

From the moment four bodies were discovered in a furniture store in Winona, Mississippi,  this case has been driven by racial, social and political anxiety.

Doug Evans was looking at four victims and no murder weapon.  This meant trouble and he knew it.

The obvious suspect was Doyle Simpson.   The morning of the murders, Simpson told everyone he met knew that a gun had been stolen from the glove compartment of his dusty old car.  Doyle had a history of involvement with narcotics traffickers in New Orleans; in fact, he once came within a whisker of death after getting crosswise with the big money boys.

There is also the odd fact that Simpson’s brother, Emmitt, was present at the Angelica garment factory when investigators came looking for Doyle and that he ran at the first sight of police officers.  Doyle worked at Angelica; Emmitt did not.  So why was Emmitt there, and why did he run?

When Doyle Simpson was asked where he got the gun he reported stolen, he lied to the police.  Why?

When investigators find four victims shot execution-style in the back of the head, they automatically look for an accomplice.  This is especially true when there are no signs of flight or struggle at the crime scene.  If Doyle and Emmitt are your suspects, this problem disappears.

One of the state’s key witnesses says he saw two men in front of Tardy furniture shortly after the bodies were first discovered.

Investigators ruled out Simpson after just a few hours.  Co-workers gave him a rock-solid alibi.  Unfortunately, the police officer making these claims can’t give us any names or details because he didn’t take any notes.

But the big problem with Doyle Simpson was his complete lack of motive.  He didn’t kill four people for the less than $400 investigators claim was stolen from the furniture store.  $100 per victim does not a motive make.

And there’s the rub.  When all the evidence points to two men who have no motive for killing any of the victims there are three possibilities: either your suspects killed for sport, they are hired killers, or you’ve fingered the wrong people.

Start with Doyle Simpson, the owner of the murder weapon, and you must ask who had a motive to eliminate at least one of the four victims.  That means questioning every person with close personal or financial ties to the two men and two women killed at the Tardy furniture store.

It doesn’t end there.  Two of the victims, store owner Bertha Tardy and Carmen Rigby, the business manager, were White and socially prominent; the two male victims (one Black, one White) were unlikely targets for a hired hit..  If Doyle and Emmitt were paid killers, the real villain of this story would almost certainly be White.

And what if Doug Evans, after antagonizing dozens of upstanding white citizens with impertinent questions, came up empty?  If the DA wanted to hold onto his job somebody had to pay for the most shocking crime in Winona history.

Curtis Flowers had no way of knowing Doyle Simpson had a gun in his car.  Flowers had no access to a vehicle on the fatal morning of the murders so, if he did the deed, he had to walk to and from the crime scene.  Unlike Doyle Simpson, Flowers had no association with organized criminals.  Locally, he was known as a first-rate gospel singer and that’s about all.

Nonetheless, trial testimony suggests that within two hours of arriving at the crime scene, Doug Evans decided Curtis Flowers was his man.

Prosecuting Flowers had none of the problems associated with Doyle Simpson.  After working at the Tardy Furniture store for three days, Curtis failed to show up for work for a full week.  When, at the insistence of his mother, he called the store to see if he still had a job, he learned that he had been replaced.

But if the goal is to close the most horrific murder case in local history without enraging the local White electorate, Curtis Flowers made the perfect suspect.  His only alibi was that he had been alone at his home most of the morning in question, so he couldn’t prove innocence.  Most importantly, make Flowers your sole person of interest and the investigation stops with him.

But Evans had a problem; a problem that has dogged him for seventeen years.  He can sell his theory of the crime to a White jury, but Black folks are profoundly skeptical.  Most Black people in Montgomery County know the Flowers family and they know the Simpson brothers.   They are inclined to believe that Doyle Simpson had something to do with the murders, but there is an almost universal confidence that an influential White person paid the piper.  Whoever did the crime, Black residents say, wasn’t motivated by the paltry sums of money involved and they weren’t driven to homicidal rage by being released from a dead-end job after failing to report for a week.

There are only two explanations for the crime, Black residents tell me.  Either we are dealing with a paid hit that went bad, or the killers enjoyed killing and picked the Tardy’s store at random.  Either way, Curtis Flowers is the wrong man.

Doug Evans can sell his theory of the crime to White people for the same reason he could sell it to himself: it avoids all the pain and horror that a proper investigation would inevitably carry in its wake.

That simple fact has a profound impact on White people, but it doesn’t fly on the Black side of town.  Which explains why jury selection has been everything in this case.  Evans can get a white jury eager to convict, or he can get a mixed jury that splits along racial lines.  Which explains why Curtis Flowers is the only capital defendant in the history of American jurisprudence to be tried six times for the same crime.

3 thoughts on “Why an innocent man has been prosecuted six times for the same crime?”