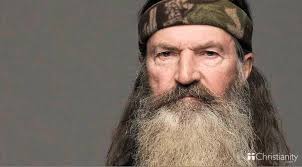 As his supporters avidly maintain, Phil wasn’t trying to be hateful or malicious; he is honestly confused by gay men and people of color.

The same combination of isolation and ignorance drove the lovely and hard-nosed Megyn Kelly to explain to the children in her audience that, although it might bother some unnamed people, Santa Claus and Jesus were both white.

Informed that men hailing from places like Turkey and Palestine do not, and did not, look like Western Europeans, Kelly began to backtrack.  She wasn’t trying to state facts, she explained in a follow-up segment designed to damp down the excitement, she was speaking tongue in cheek, making a little joke.  Levity is a good thing, right?

What else was the photogenic FOX personality supposed to say?  She could no longer insist that Jesus really is white–the jury was in on that issue.  So she decided she was giving politically correct Americans (who take themselves far too seriously, after all) a little good-natured ribbing.

Like Phil Robertson, Megyn Kelly was undone by social isolation.  She wasn’t trying to be mean or hateful; she honestly believed she was stating God’s own truth.  Every picture of Santa Claus she had ever seen was white.  Jesus is always depicted as the quintessence of whiteness, is He not?

White evangelicals have a proprietary feeling about Jesus; it’s almost as if he’s their guy, their property.  It is part of what those despicable liberals call “white privilege”.  Christianity is a white religion.  Sure, we’re nice enough to share Jesus with people of color; but he can never be theirs in the sense he is ours.   They have Jesus on loan.

No one ever says this outright, nor does the idea enter conscious thought.  It is too obvious, too self-evident to warrant comment or reflection.  It simply is.  And as Megyn says, we can’t change the facts just to keep the minorities happy.

I am sure I would love to spend an evening with either Phil or Megyn.  They’re both fun to look at, though for entirely different reasons.  I’m sure the conversation would be lively.  These are not evil people.  In fact, they’re trying to be really, really good (as befits the season).

That’s what makes this whole business so sad.  Fighting-mad liberals who assume that Phil hates gay men and African Americans are showing their own species of cultural ignorance.  This isn’t personal, or at least it shouldn’t be.  It’s about the nature and future of America.

Should Phil Robertson have been suspended from Duck Dynasty for making weird and offensive statements?  That’s not my call.  But when a man displays this level of cultural ignorance it places A&E in a tough spot.  Should they offend liberals by turning a blind eye, or open themselves to conservative backlash by taking decisive action?  I’m sure their interim and ultimate decisions are largely dictated by the company’s bottom line.  This isn’t political correctness; it’s strictly business.

Unfortunately, the same craven self-interest is visible among the long list of conservatives, from Bobby Jindal to Tex Cruz, who have risen to Phil’s defense.  For them, this is a First Amendment issue.  Phil should have the right to say whatever he wants whenever he wants.  No one is saying otherwise, of course.  A&E is not the government.  They are not stopping Mr. Robertson from saying whatever he wants to say on any subject he wishes to address.  But companies have the right to fire people for making hurtful and inflammatory remarks.

Politicians like Jindal and Cruz (and an unsavory swarm of religious conservatives) are just as socially isolated and culturally ignorant as the man they are defending.  So many people, on the right and the left, spend so much of their time with those who look, speak and think just like them, that they have lost the capacity to anticipate how their comments register with outsiders.  Jindal and Cruz know this.  They know their kind of voters will rally behind Megyn and Phil because they share Megyn and Phil’s perspective.

Do over 95% of African Americans vote Democrat because they can’t get enough of that welfare; or, confronted with the level of racial insensitivity we have witnessed in recent days, do they simply have nowhere else to go?  Why can’t both major parties look like America?  Is that too much to ask?