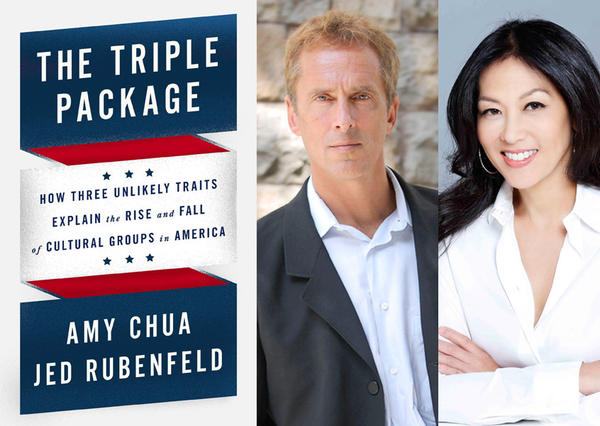 Why do some ethnic groups do so much better in America, on average, than others?  For instance, why do Cuban immigrants often outperform Mexicans or Puerto Ricans? And why do immigrant families from India experience greater success than, say, the Vietnamese?

Amy “Tiger Mom” Chua and her husband, Jed Rubenstein, think they know the answer.  American winners are tapping into what the authors call “the triple package”:

1) They believe themselves to be superior to other groups while 2) remaining deeply insecure about their place in American society. And 3) they all impose an extraordinary sense of self-discipline on their children.

The reaction to this thesis has been swift.  Some are calling this tendency to separate winner cultures from losers “the new racism”.

In TIME, Suketu Mehta points out that most immigrant families from places like India and Nigeria enter America laden with capital, cultural and otherwise.  These families are culled from the upper 1% of their native population and have a long list of advantages and opportunities to hand down to their children.

In an Atlantic article, Olga Kazan pokes holes in the author’s theory in exhaustive detail.

I have chosen to share Hector Tobar’s critique from the Los Angeles Times with you, largely because Tobar was the first journalist from a flagship newspaper to cover the Tulia drug bust in 2000.  Friends of Justice (and Randy Credico with the Kunstler Fund for Racial Justice) had been trumpeting that gross injustice to everyone we knew (which in Credico’s case, was just about everybody); but it took a long time to catch anyone’s attention.  Tobar’s story appeared the same Sunday morning that the story broke in the New York Times–but he got to town first and did a more thorough investigation.

Tobar writes as the son of an immigrant family and this stuff is personal for him.

Amy Chua and Jed Rubenfeld were being interviewed on Morning Joe this morning as I did my weight lifting thing at the gym.  I didn’t see the entire segment, but the couple appeared to be getting softball question.   After reading Tobar’s article, let us know what you think of the Triple Package theory.

More than two centuries ago, our Founding Fathers declared that all humans are born with the same inherent potential. Ever since, having the phrase “created equal” in our Declaration of Independence has been one the coolest things about being an American.

Now, married Yale law professors Amy Chua and Jed Rubenfeld have stepped forward to say that being “created equal” doesn’t matter. Instead, their controversial (and sometimes cringe-inducing) new book, “The Triple Package: How Three Unlikely Traits Explain the Rise and Fall of Cultural Groups in America,” argues that our cultural background largely determines our fate and the fate of our progeny. Whether our kids get into Harvard, for instance, or end up laboring for minimum wage.

The luckiest Americans, they say, are born with “The Triple Package,” a set of can-do values handed down to them by their families. Chua and Rubenfeld know that saying some of us are born to more ambitious cultures than others makes them sound “un-American,” but they don’t care. Chua’s contentious previous book, “The Battle Hymn of the Tiger Mother,” with its portrayal of Asian American mothers as obsessed control freaks, seems to have emboldened the author and her husband.

“The reality, uncomfortable as it may be to talk about, is that some religious, ethnic and national-origin groups are starkly more successful than others,” Chua and Rubenfeld write. They point to Jews, Mormons and immigrants from China, Iran and Nigeria as examples of groups that raise their children with three contradictory but powerful qualities: 1) They believe themselves to be superior to other groups while 2) remaining deeply insecure about their place in American society. And 3) they all impose an extraordinary sense of self-discipline on their children.

Successful American groups teach their kids to resist immediate gratification, telling them, “You are capable of great things because of the group to which you belong,” the authors write. But also that “individually, you are not good enough; so you need to control yourself … prove yourself.”

Not surprisingly these arguments have already brought forth a torrent of criticism. In Time magazine, Suketu Mehta wrote that the book is emblematic of a “new racism” that has seen “a new strain of racial, ethnic and cultural reductivism” creep into the American public discourse. In the Atlantic, Olga Khazan accused the couple of a crassly materialistic definition of success as “money, fame and power.”

“The Triple Package” is a deliberately provocative book, yet it is also measured and defensive. The duo make all sorts of qualifications and exceptions to their basic thesis: Not everyone raised in a Triple Package culture succeeds, they acknowledge. And being raised in one can be corrosive to the soul.

They also argue that there are individuals who triumph despite being born into groups without the Triple Package, like Supreme Court Justice Sonia Sotomayor, who managed to succeed despite being Puerto Rican — one of many ethnicities and cohorts to get a quick, backhanded slap across the face in this book.

I wasn’t born into a Triple Package culture either. However, I did have: a demanding immigrant father (“What’s this B on your report card?”) who imbued me with the idea of Guatemalan exceptionalism (“Our Spanish is better than anyone else’s”) and a California childhood in which I never shook the sense that I was a brown-skinned outsider. Chua and Rubenfeld suggest that these characteristics put me in the same league with a wide variety of successful individuals born into Triple Package cultures, such as the financial wizard and presidential nominee Mitt Romney and the novelist Saul Bellow.

Aside from its assault on American egalitarian sensibilities, “The Triple Package” is a sloppy book, as is evident in the authors’ description of what constitutes a group’s “success.” In lieu of a definition, Chua and Rubenfeld cobble together assorted celebrity anecdotes and academic studies into arguments that have all the profundity of a rookie salesman’s first PowerPoint presentation.

In introducing the Mormons, for example, the authors establish the group’s success by rattling off the names of a series of Mormon CEOs of U.S. corporations. “If there’s one group in the U.S. today that’s hitting it out of the park with conventional success, it’s Mormons,” the authors write. Mormon executives exercise “impulse control” by not drinking martinis with their non-Mormon counterparts and are driven by being seen as weird outsiders in an otherwise WASP-dominated culture.

This is an exceedingly shallow vision of the modern Mormon experience, which treats Mormon as a synonym for affluence and ignores that Salt Lake City is riven with class divisions between Mormon haves and have-nots.

The failure to consider historical and economic factors runs through the book and is one of its most telling weaknesses. Time and again, Chua and Rubenfeld paint portraits of various groups with the broadest brush imaginable. Appalachians are not successful because they lack “impulse control,” as evidenced by their high rates of obesity. And even White Anglo Saxon Protestants are supposedly losing their Triple Package edge: Thanks in part to the 1990s’ self-esteem movement, WASPs aren’t as hungry as they used to be, accelerating the decline of U.S. culture.

The author’s discussion of the 20th century Jewish experience is one of the more nuanced sections. They argue that Jews’ ambition, their status as perpetual outsiders and “chosen people” narrative are responsible for Jewish success on North American shores. But for the Jews, as with other groups, the Triple Package is a blessing and a curse. It isn’t fun to be born to parents who always find something lacking in their children, though it has spawned countless jokes about Jewish mothers, including this one the authors relate: “You see that girl up there?” asks the Jewish mother whose daughter is being inaugurated president. “Her brother’s a doctor.” The Triple Package advantage is apparently waning in Jewish American circles, however, as generations grow more distant from their hardscrabble Eastern European roots. “Extremely few American Jews under the age of thirty today are in position to be embarrassed by having a peddler for a father,” the duo writes.

And what about the vast number of Americans born without the Triple Package? Chua and Rubenfeld do their best to tiptoe around several minefields. If the Triple Package isn’t present in the culture of black Americans it’s because “the United States did everything it could for centuries to grind the Triple Package out of African American culture — and is still doing so today,” the authors write.

But the gravest sin in “The Triple Package” is its refusal to look at these groups in the larger economic context. For Chua and Rubenfeld, the 1980s and ’90s were times of plenty because a lot of Americans got filthy rich. But a vast literature (including George Packer’s excellent “The Unwinding”) has shown how fiscal austerity and de-industrialization policies ravaged the U.S. middle class during this same time period.

The authors do not blame political or corporate leaders for America’s decline but Americans themselves. They even blame the Great Recession on our gradual rejection of Triple Package values. “America had lost the Triple Package, and this loss had infected the whole system,” they write.

America needs to gets its edge back, the authors say. In the book’s final pages, they come perilously close to suggesting another war might give us all the collective chip on our shoulder we need to thrive.

“The Triple Package” is a grim book, a kind of scolding rebuke about the softening of America dressed up in pseudo-academic arguments. It will convince few and offend many, though one senses the authors believe themselves to be too special to care.

One thought on “The New Racism? “The Triple Package” stirs controversy”