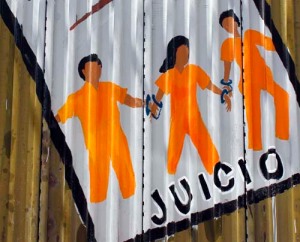 We talk a lot about Operation Streamline at Friends of Justice because it highlights the human cost of mass deportation.  This recent article from the Washington Post presents both sides of the debate.

Supporters of Operation Streamline appeal to the obvious: people who enter the United States illegally are criminals by definition and must live the consequences.  If we are to continue as a sovereign nation we must defend our borders.

But anyone who has sat through one of these humiliating “cattle call” hearings knows it isn’t that simple.  Most of the men and women who cross the border illegally are driven by a desperation few Americans can fathom.  Placed in their shoes, we would do the same without reservation or remorse.

The Post piece ends with a poignant vignette from a recent deportation hearing in Tucson that illustrates the moral dilemma perfectly:

During one session last week, all 70 people accepted the government’s plea agreement. They received sentences of 30 to 180 days in jail.

Sometimes, the migrants ask to say a few words. On Jan. 21, a Mexican man in one of the groups addressed Judge Jacqueline Rateau after he pleaded guilty.

“I would like to say, I didn’t really want to come to the United States. I had a little shop over there in Michoacan. The mafia told me I had to pay them 500 pesos a month, and I didn’t have that much money to pay them,” he said, referring to a sum of about $37. “I had to leave Michoacan because they threatened me.”

Given the rampant violence in that part of Mexico, the man could have made an asylum claim, other lawyers said.

“I’m sorry you found yourself in that situation,” Rateau told the man. “And I hope you’re safe when you go back home.”

On Jan. 29, another shackled man requested that his jail sentence be reduced to 30 days.

“The reason being my family, my wife, my mother, my siblings, rely on me financially,” he told Velasco.

Velasco said he didn’t have the authority to reduce the sentence.

“Furthermore, I can assure you that if you look around in this courtroom, that everybody I have addressed today, and everybody I’m going to address the rest of this afternoon, more likely than not, is here because of economic considerations,” he said.

“Nevertheless, you violated the law. You know it. And you can either accept the sentence or enter a plea of not guilty and request a trial. Do you understand that?”