I first realized that , prisons had become the go-to institution for treating mental illness when I met Adolphus, a man in his forties who lived in Tulia, Texas, with his elderly mother.  Adolphus had been diagnosed with schizophrenia by the doctors at the state hospital in Big Spring, but he rarely stayed on his meds.  They made him feel sleepy, he said, like his head was stuffed with cotton.

Dolphus, as his family called him, preferred to self-medicate.  He used crack cocaine.  It made him feel normal.

Dolphus showed up at the door one night asking for twenty dollars “so I can get myself a room.”  I offered our guest bed.  “You got any HBO back there?” he asked.

It was easy to get frustrated with Dolphus.  His mother called the police when his delusions got so out of control that he made her afraid.

Eventually, Dolphus was caught with a few rocks of crack.  Well, not exactly. When the police asked him to turn out his pockets, he swallowed the crack and then refused to give permission to have his stomach pumped.

The DA decided that Adolphus needed to be permanently removed from the streets, but there were no hospital rooms.  Public health officials recommend that states maintain 50 psychiatric beds per 100,000 population; Texas has 8.5.

So Dolphus was charged with obstructing justice and, owing to his multiple prior convictions, the prosecution was asking for fifty years.

I learned that the trial was underway when the defense attorney remembered to call a family member when the trial was half over.  We raced down to Plainview, arriving just as the defense was ready to present its case.  The attorney didn’t know that Dolphus was schizophrenic.  Nobody thought it mattered.  Dolphus’s lawyer tried to put me on the stand to testify to that fact, but since I had no standing as a medical expert, the judge refused to let me testify and the jury was left in the dark.

They gave Dolphus forty years.  As they led Dolphus away, the prosecutor took me aside.  “I know he belongs in a mental hospital,” he told me, “but the state of Texas doesn’t have the beds.  He can’t be on the streets, so he’s got to go to prison.  I don’t like it, but that’s the only option we’ve got.”

Dolphus lasted a few years in prison before he died; we never learned how.  It might have been an untreated medical issue.  Or perhaps his delusions put him cross-ways with the wrong person.  Either way, Dolphus was dead.

The Guardian is doing a series on the tragic state of America’s mental health system.  The first story appears below. 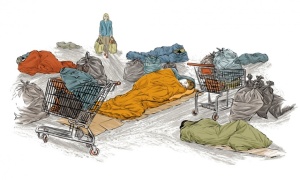 A safe place to stay: the struggle to find housing for America’s mentally ill patients

Geraldine, 64, has spent the past 20 years trying to find a safe place for her son. But a chronic shortage of ‘supportive housing’ for people with mental illness has taken its toll, and, as she tells Amanda Holpuch, ‘I know what happens. He ends up in jail’.

At any given time, there may be a few hundred homeless people in Seattle’s Pioneer Square neighborhood, huddling under the overpasses from the persistent Washington rain. It’s a familiar place for Geraldine, who has spent the past 20 years caring for her 38-year-old son, who is mentally ill.

When her son is not in prison or in hospital, Geraldine, 64, makes daily visits to a three-block area to bring him food, drink and warm clothing. She knows the color of his sleeping bag, and seeks it out among the dozens of others in between the shopping carts and trash bags. Sometimes he rejects her help. Other times, he gives her gifts to other people on the street.

Often, her son has lost more weight, and his hair is more unkempt. His eyes look distant and strained.

These days, however, instead of going to Pioneer Square, Geraldine makes aweekly trip to a psychiatric hospital, where her son is being treated for schizophrenia.

It’s the longest Geraldine’s son has been stably housed since his initial diagnosis nearly 20 years ago, but she’s afraid he will end up back on the streets, in prison, or dead – because of the lack of safe, long-term housing available to people with severe mental illness.

“It’s all-consuming. I think about it all the time, even when I’m doing things I enjoy,” Geraldine told the Guardian. “Then I think about him and how he is living.”

Ever since her son disappeared from home as a teenager, he has ping-ponged through jails, homeless shelters, halfway houses and the streets, and Geraldine has spent that time working to find him a safe place.

She emails, calls and meets advocates, politicians and administrators on her son’s behalf. She is not comfortable providing her surname – her complaints within the system have caused her to be a recognized name, and she is afraid those complaints will affect her son’s chances to receive adequate care. She also asked that her son not be named.

Geraldine, who has two other children, believes stable housing is the only way her son can manage his schizophrenia and lead a safe, healthy life. Despite being her son’s primary caregiver, Geraldine doesn’t have the resources to provide him with the so-called “supportive housing” she believes he needs, and which, research shows, could keep him from returning to jail or the emergency room.

Gretchen Locke, at social policy thinktank Abt Associates, has researched homelessness for more than 20 years, and is a firm believer in the power of supportive housing.

“It really does facilitate stable housing, and also reduces the use of expensive crisis care, which is often where homeless people end up. If [people with mental health problems] are not stably housed, they’re more inclined to end up in the emergency room or jail or detox and those kind of expensive safety net services,” Locke said.

“Stable housing can provide a platform for addressing mental illness that may not have been addressed in the past.”

Once in supportive housing, mentally ill people rely less on other expensive services, according to a University of North Carolina Charlotte study from February this year.

Researchers found that the total hospital bill for 61 chronically homeless adults – 38 of whom had a mental illness – decreased by $1.8m over one year that they spent in supportive housing. Once in housing, residents had a 78% reduction in emergency room visits and a 79% reduction in days spent at the hospital.

Supportive housing programs don’t always pay for themselves, but because mentally ill people tend to use more expensive services, the costs of putting them in supportive housing are often offset by decreases elsewhere, said Dennis Culhane, a professor of social policy at the University of Pennsylvania and the director of research for the National Center on Homelessness among Veterans at the US Department of Veterans Affairs.

“Being homeless involves a range of dehumanizing experiences, and also greatly puts people at risk of victimization and exposure to injury – as well as being marginalized,” said Culhane. “Housing, by its nature, affords people protection: socially, physically and emotionally. So it’s really about transforming people’s quality of life.”