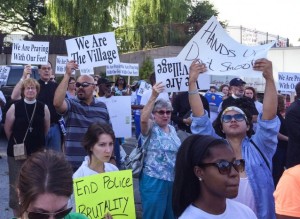 Michael Brown was unarmed when Darren Wilson gunned him down. Now the  police chief of Ferguson, Missouri is suggesting that Brown was died because officer Wilson believed he had stolen a box of cigars.

I suppose that bit of information is supposed to alter our perception of this story.

Unfortunately, a lot of people, most of them white and middle class, will be satisfied with the cigar-theory because it fits with one of their core beliefs: law-abiding citizens have nothing to fear from police officers.  Therefore, If you are shot by a police officer, you are a thug.  End of story.

We all assumed that officer Wilson started shooting after the situation had spun out of control.  He didn’t just walk up to a random black guy and discharge his weapon because he hates Black people.

But too much attention to the backstory can deflect us from the real issues.

Under what circumstances can a police officer legitimately discharge his weapon?  If the officer’s life is threatened?  In order to stop an active shooter?

However we answer the question, the killing of Michael Brown cannot be justified.  Was Brown was the studious “gentle giant” described by friends and family?  Was he the cigar-stealing punk the police chief would have us imagine?  Was he a complicated combination of the two profiles: a punk with potential, if you will?

Officer Wilson is responsible for his actions, but he has also been shaped by the culture of the Ferguson Police Department and, more broadly, by cop culture.

When racial tension flares in places like Tulia, Texas or Jena, Louisiana, the media ask if old-school racism is uniquely rampant in that town or if the folks crying foul are blowing things out of proportion. When journalists and TV cameras enter the picture you will see some grandstanding, and this St. Louis suburb is no exception.  The person who screams the loudest gets on the evening news.  But the mistrust between cops and community in Ferguson is real and, more to the point, it’s a nationwide phenom

Can we learn from Ferguson, Missouri, or is this just another news hook on which pedants and culture warriors can hang their hats?

We can learn a lot.

Here’s the first big takeaway: the militarization of law enforcement is a really bad idea.

Observers on the civil rights left and the libertarian right are reaching the same conclusion: soldiers and police officers perform very different responsibilities and should dress accordingly.  Protesters facing rubber bullets, tear gas and heavily armored men enmeshed in riot gear feel their community is being invaded and respond accordingly.

The mood shifted in Ferguson the second Captain Ron Johnson of the Highway Patrol arrived on the scene.  The officers under his command showed up in normal police attire and Captain Johnson set an example for his officers by wading into the crowd, shaking hands, exchanging hugs and establishing a genuine rapport with the protesters.

The contrast in style and outcome was too stark to be ignored or explained away.  The Department of Defense must stop sending surplus military gear to local law enforcement.  They don’t need it, it’s counterproductive, and it sends precisely the wrong message.

In addition, Ferguson teaches us that the cop-community divide can be overcome.

The best work on this subject comes from David Kennedy, a criminologist who has been studying the cop-community issue for decades.  Kennedy directs the Center for Crime Prevention and Control and teaches criminal justice at New York’s John Jay College of Criminal Justice.  His book, Don’t Shoot, provides a blueprint for healing violent communities.

A couple of quotes from my review of Don’t Shoot will give you the gist of his argument. Ferguson, Missouri is an inner suburb of St. Louis, not exactly the inner city, high-poverty, high-crime community Kennedy describes in his book, but his portrait of the problem is still on target.

When Kennedy talks about working with the community, most cops tell him “there’s no community to work with . . . Everybody . . . is living off drug money, nobody cares, there’s no community left.”   Police officers “don’t understand the anger, see only excuses and victimhood.”  Cops don’t dislike black people, Kennedy insists, and they haven’t written off black America.  Police officers, black and white alike, “have written off the neighborhoods, the communities.”

Call this racism, Kennedy asserts, and cops shut down.  It isn’t racism, as the word is normally defined, “But it’s all soaked in race, simmering every day in our real, toxic history of racism, in the racism that remains.”

Even in the most crime-ridden communities, Kennedy says, the majority of people are law-abiding and hard working.  Unfortunately, frequent encounters with the least functional elements of a community can warp the perspective of police officers, especially when the majority of residents see the police as an occupying force and react accordingly.

Police officers abuse the residents of inner city neighborhoods and cut legal corners because, in their jaded and cynical eyes, every young man they see is a drug dealer and the community either endorses or tolerates their activities.  Kennedy loves police culture and enjoys being with cops, but he deplores “the kind of policing that makes citizens in these neighborhoods think, at best, that the police are not on their side, and at worst that they are a race enemy.”  If the police are viewed in this way, “there can be no rightful place for the law . . . When standing against guns and drugs and violence means standing with a race enemy, not many will stand.  When doing something means putting your own sons and grandsons and neighbors in prison, not many will do something.”

The cop-community divide was exacerbated in Ferguson because the local police department remained overwhelmingly White long after the community had become 65% Black.  But, as Kennedy insists, this isn’t just a black-white problem.  Many Black officers are eager to show that they won’t cut their own people any slack.  “I came up hard and I have made something of myself,” they tell themselves, “so I have zero tolerance for kids that won’t try.”

Captain Ron Johnson of the Missouri Highway Patrol didn’t bridge the cop-community divide because he is Black; he transformed a toxic situation because he treated protesters like citizens in good standing, people performing a civic service by demanding liberty, justice and protection for all.

Last night, local clergy, Black and White, Protestant and Roman Catholic, linked arms in Ferguson in a remarkable sign of unity.  Real racial reconciliation can be built on that kind of foundation.

Tragically, most of the leading lights of the White evangelical world have paid little attention to the Ferguson story, possibly because they have nothing to say.  Russell Moore, the president of the Ethics and Religious Liberty Commission of the Southern Baptist Convention, is a blessed exception.  Here’s the concluding words of his thoughtful post:

If we start to see more churches so alive to the gospel that they are not segregated out as “white” or “black” or “Hispanic” or “Asian” or “white collar” or “blue collar,” we will start to reflect something of a kingdom of God made up of those from every tribe, tongue, nation, and language (Rev. 5:9). And as we know one another as brothers and sisters, we will start to speak up for one another, including in the public square.  Ferguson reminds us that American society has a long way to go in healing old hatreds. Our churches are not outposts of American society. Our churches are to be colonies of the kingdom of God. Let’s not just announce what unity and reconciliation ought to look like. Let’s also show it.

Moore proves that the warm language of evangelical piety can address the racial divide.  The churches of Ferguson, Missouri certainly behaved like “colonies of the kingdom of God” last night.  As a white Episcopal priest put it:

“The point is to win hearts, and we believe there is gospel truth in that voice of the young people from Ferguson. We’re not doing this against the police, we’re doing this for the police.”

Let us pray that the cop-community divide can be healed, in Ferguson, Missouri, and across our troubled nation.

3 thoughts on “Healing the cop-community divide in Ferguson, Missouri”