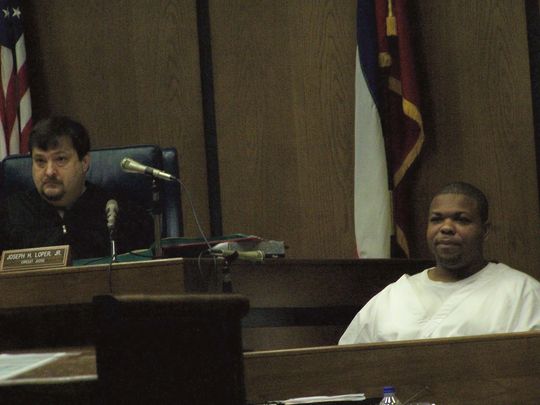 That’s Odell Hallmon telling a jury in Winona, Mississippi, that Curtis Flowers confessed to killing four people in a local furniture store in 1996.  Now it’s Hallmon who stands accused of killing three people in a town 20 miles south of Winona.

The difference is that Doug Evans, the DA who prosecuted Curtis Flowers 6 times before getting a final conviction, won’t have to create a case out of thin air to convict Hallmon–there is actual evidence.  You can find more about Hallmon’s role in convicting Flowers here.

But it gets worse.

In the first of the six Curtis Flowers trials (no capital case has been re-tried six times) Hallmon testified that Flowers had confessed to the murders when the two men were cellmates in the state penitentiary in Parchman, Mississippi.

In the second trial, Hallmon reversed himself.  He and his sister Patricia had learned that a reward of $30,000 was being offered to anyone giving evidence leading to a conviction in the case and they wanted to cash in.  So, when Hallmon and Flowers were locked up together, Patricia told Odell what to say and how to say it.

Then Odell, by his own account, got out of prison and was forced to live with a mother and a sister who were angry with him for turning on the family.  So Odell recanted his recantation and hasn’t budged since.

But it gets worse.

The state’s case against Flowers is entirely dependent on the testimony of Patricia Hallmon (she goes by several names, but we don’t want to further complicated this Byzantine story).   This isn’t obvious on first blush because the state put up several witnesses who testified to seeing Flowers on the fateful morning when four innocent people died at the Tardy furniture store.  But Patricia gave Doug Evans and his associates precisely the story they were looking for.  Her testimony established the template on which everything else rests.

A janitor at a clothing factory testified that his gun was stolen out of his glove compartment the morning of the murders and ballistics tests suggested that the bullets fired at the furniture store could have come from the make of gun the janitor described.  But since the authorities figured Flowers as the gunman long before they had a shred of evidence associating him with the crime, they needed to tell a jury how he pulled it off.  And that’s where Patricia comes in.

Patricia Hallmon told investigators that she had seen Curtis Flowers leave his house early, early in the morning, return an hour or so later, then head out in the direction of the furniture store shortly before the killings went down.

The state’s “investigation” of what came to be known as “the Tardy murders” was based entirely on Patricia’s timeline.  Police officers went door-to-door along the route Patricia’s testimony required, first from Flowers’ home to the clothing factory, then from Flowers’ home to the furniture store.  Testimony makes clear that potential witnesses were shown a picture of Curtis Flowers and a handbill advertising the $30,000 reward.

Most of the folks who lived along these routes were exceedingly poor.  For them, $30,000 was a princely sum–more money than they had ever earned in a single year or, in most cases, any given two or three year stretch.  Still, it took a full year to find enough witnesses to make the case.  True, they all disagreed on what Curtis was wearing (as in, there is no overlap in their descriptions whatsoever), and none of these people (Patricia Hallmon excepted) came forward of their own volition.  But they were willing to say what the state needed them to say: “I saw Curtis Flowers on his way to the factory.”  “I saw Curtis Flowers in the vicinity of the furniture store.”

Now you see why the case against Flowers stands or falls with the credibility of Odell and Patricia Hallmon.

Did this delightful brother-sister act spill the beans on Curtis Flowers as good-hearted citizens eager to do the right thing; or did they create their stories out of whole cloth because there was $30,000 on the table and they knew what the authorities wanted to hear?

Subsequent events don’t merely tilt in the direction of the second option–it is now obvious that Patricia and Odell are psychopathic liars whose testimony at trial can’t be taken seriously.

Still not convinced?  Consider this . . .

Short months after Curtis Flowers was sentenced to die, Patricia Hallmon was indicted in federal court for filing fourteen fraudulent income tax returns claiming $481,798 in bogus deductions.  She was subsequently found guilty and sentenced to three years in federal prison.

The link above may be the only public record of Patricia’s legal problems and, even when the story was briefly noted in the Jackson Clarion-Ledger no questions were raised about Patricia’s credibility as a witness in the Flowers case.

And little brother Odell is charged with committing three brutal murders (and attempting a fourth).  Since the suspect has turned himself in, a surviving victim may live to tell her tale, and Hallmon possessed a simple motive (he got out of prison in August and after nine months, his girlfriend sent him packing) Doug Evans and friends won’t need to summon more testimony from the ether.

Meanwhile, Curtis Flowers remains in Parchman prison awaiting his date with the executioner as his attorneys take his appeal to the federal level.

Will the Mississippi press connect the dots connecting Odell and Patricia?  Will reporters reexamine their blase assumption that Flowers must be guilty?  Will the court system consider any of this to be legally relevant?  (Don’t laugh, there’s a good chance they won’t).

This story from the Clarion-Ledger is a good start.