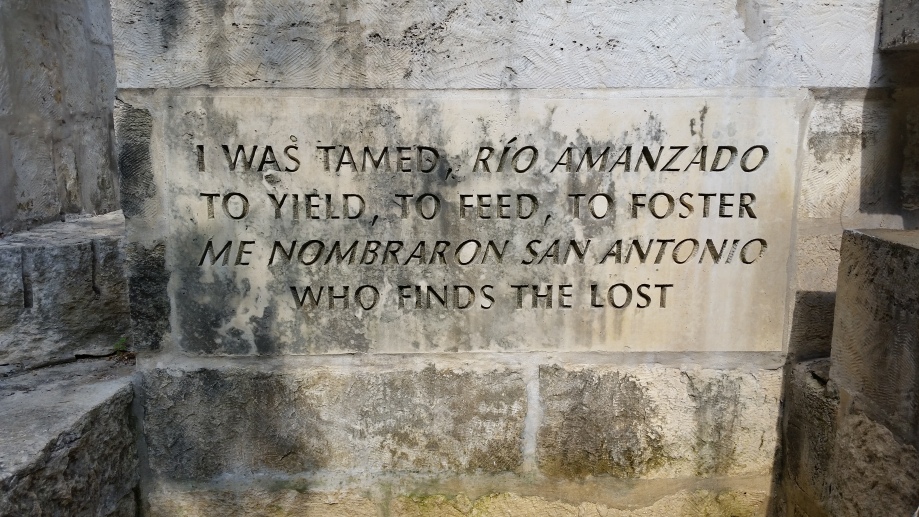 Spend much time in old San Antonio and you realize the city is really old–at least by Texas standards.  A charming mix of Latino and German roots, the city is best known for the Alamo and its delightful River Walk.  If you’ve seen the Alamo once, that’s generally enough; but the River Walk keeps serving up surprises.

As my wife Nancy and I strolled along one of the less commercialized stretches of the River Walk, I noticed that several arresting inscriptions had been chiseled into the rock work.  Take the one above, “I was tamed, Rio Amanzado to yield, to feed, to foster.  Me Nombraron San Antonio  who finds the lost.”  The dangerous river that flooded the city in 1921 was brought to heal, tamed, domesticated, transformed into a source of peace and healing.  Like Saint Anthony (a disciple of Saint Francis) the river seeks and finds the lost and the last.

I’m not exactly sure who “the lost” in this instance might be, but another inscription provides a clue. 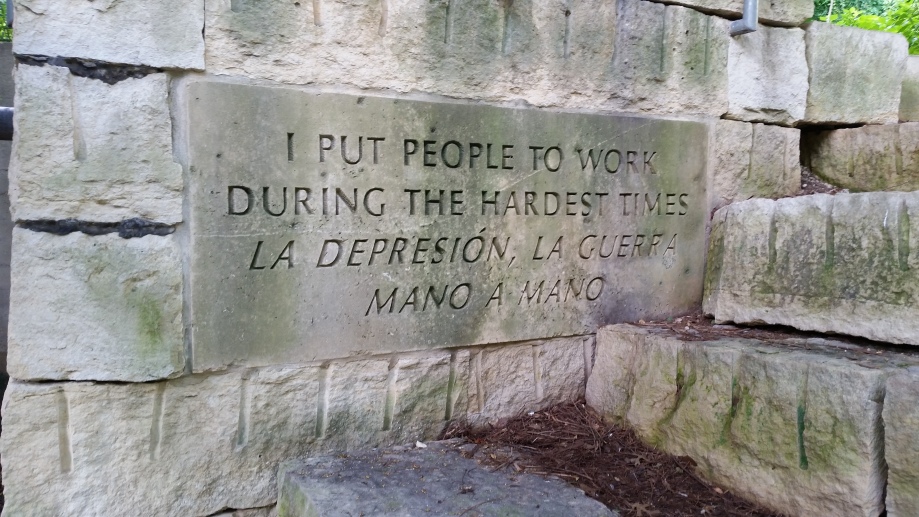 In the wake of the 1921 flood, city leaders had suggested turning the river into a covered sewer before conservationists nixed the idea.  “They wanted to turn San Antonio into Dallas,” our tour guide quipped.  The River Walk Project came to life in 1929 in the mind of architect Robert Hugman, a San Antonio native.  Progress was maddeningly slow; in the heart of the depression there was no money for such an audacious scheme.

Then came FDR’s Works Progress Administration (WPA).  Unemployed men were put to work building the first iterations of today’s River Walk.  Some of the tools the men used have been incorporated into the rock work as a testament to their sweat and spirit.

It took buy-in from the business community to make the River Walk a commercial success, of course, but unalloyed capitalism could never come up with such a lovely scheme on its own–its interests are too parochial, too narrow, and too immediate.  The River Work came to life as a way to provide employment for desperate families during the Great Depression and World War II. 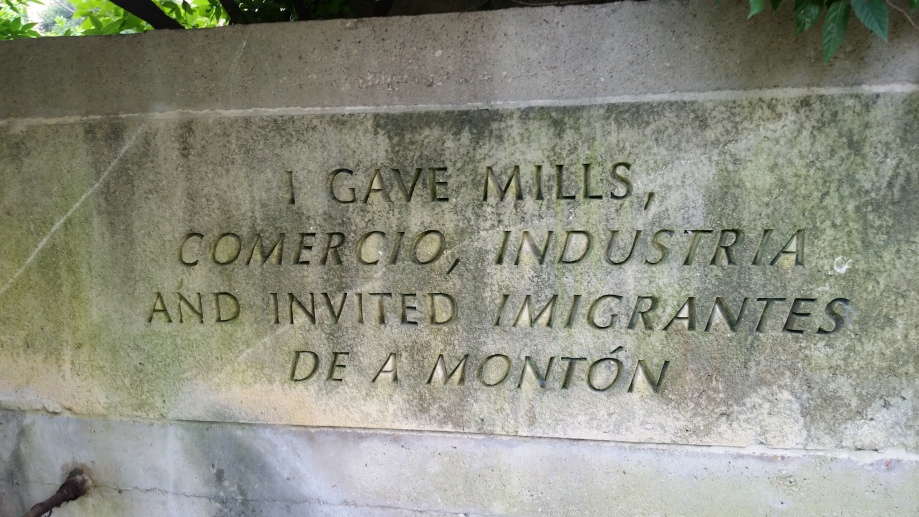 “Imigrantes de a Montón” celebrates the fact that “immigrants by the score” or, literally, great heaps of immigrants, were drawn to San Antonio by a tamed river.  If this inscription was written by liberals it would refer only to immigration.  If it was written by conservatives it would be restricted to mills, commerce and industry.  But old inscriptions, even those from half a century ago, often put together ideas we put asunder.

The federal government could never inspire something as glorious as the River Walk; but neither could unfettered free enterprise.  It took a combination of compassion and entrepreneurial spirit to work the miracle, a combination we have lost.  Maybe Saint Anthony can help us find it.