Evangelical support for Donald Trump should come as no surprise. The Republican candid 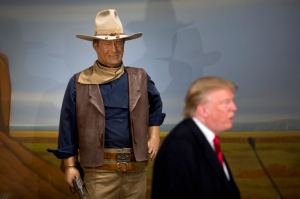 ate personifies idealized white manhood; he’s an iconic American in the mold of John Wayne. For evangelical leaders of a certain age, that makes him the perfect candidate.

American evangelicalism took shape against the backdrop of anti-communist hysteria and explosive economic growth that followed World War II. Led by Billy Graham, post-war evangelicals became the beaming face of Christian orthodoxy, a corrective to the mean-spirited fundamentalism that had fallen out of favor in post-war America. The shift was intentional and carefully orchestrated.

When Cliff Barrows and Billy Graham arrived in Los Angeles to drum up interest in their 1949 tent revival, an invitation to appear on Stuart Hamblen’s popular “Cowboy Church of the Air” program sounded like just the thing. Hamblen was the first of the singing cowboys, a hard-drinking, skirt-chasing, sure-enough Texas ranch hand who paused between gospel numbers to do impromptu spots for cigarettes and booze.

So put them hounds back in the pens and quit your silly grinnin’.
Well, the moon is bright, and I’m half tight. My life is just beginning’.
I won’t go huntin’ with you, Jake, but I’ll go chasin’ women.

When Billy Graham invited Hamblen’s radio audience to join him under the big tent Hamblen promised to be in the front row on opening night. He kept his promise and, as Graham exhorted the crowd to shun communism and embrace Jesus, the singing cowboy began to weep. When the invitation came, he strode to the front and gave his life to Jesus.

Hamblen sold his racing horses and quit chasing women, cussing, smoking and drinking. When he refused to do live commercials for cigarettes and whiskey his “Cowboy Church of the Air” was abruptly cancelled.

“Don’t you miss the booze?”

“I hear you got religion?”

“Well, I don’t understand how you could give up drinking that easily,” Wayne said, “you really loved your whiskey.”

“Well, it’s no secret what God’s done for me,” Hamblen countered, “and he can do the same for you.”

“That kind of a catchy line,” Wayne replied, eager to change the subject, “you ought to turn it into a song.”

From that chance encounter came the gospel ditty that was on the lips of every singer from Elvis Presley to Jim Reeves when I was a boy: “It Is No Secret What God Can Do.”

The chimes of time ring out the news, another day is through
Someone slipped and fell, was that someone you?
You may have longed for added strength your courage to renew
Do not be disheartened, for I bring hope for you:

When Hamblen sang the song under Graham’s big tent the reaction was electric. It wasn’t long before the Los Angeles Times, Time and Newsweek were “puffing” the crusade and publishing excerpts from Graham’s sermons. Celebrities like John Wayne and Ronald Reagan appeared on stage with the now-famous preacher, but they showed no interest in following Hamblen down the aisle.

By 1949, John Wayne had been honing his now-familiar image for over a decade: the principled loner, a bit awkward with the ladies, who is always on the side of justice, never backs down from a fight, and always comes out on top.

It had taken years to become the personification of idealized white manhood, a kind of American Christ figure. Marion Morrison (his real name) might have doubts and foibles, but the swaggering mythos of John Wayne did not. The Duke was self-sufficient, never slipped, never fell and never “longed for added strength.” Wayne had tamed the West, had planted the flag on Iwo Jima and he was standing foursquare against the communist menace.

Walking the sawdust trail would have messed with his brand.

This created a problem for evangelicals. After Wayne’s death, an urban legend had him converted on his death bed due to the intervention of Robert Schuller’s daughter, but that story has been thoroughly debunked. In 1965, the actor was paid $25,000 for a one-line cameo: “Truly, He was the Son of God” in the overwrought epic The Greatest Story Ever Told, but the real John Wayne kept up his womanizing, hard drinking, six-pack-a-day smoking ways until, two days before his death, he converted to Catholicism and died in a state of grace.

Stuart Hamblen conversion stories enjoyed a prominent place in the land of born again, but, in this world with devils filled, the tangible salvation John Wayne promised was honored as well. The unspoken mantra of post-war evangelicalism was simple: Jesus can save your soul; but John Wayne will save your ass.

A curious song by the Bill Gaither Vocal Band explores how this Jesus/John Wayne dualism played out in evangelical experience:

Momma’s love was tender, Daddy’s love was strong
But both of them were there to help the weak.
They taught me to stand up and fight for what is right
Showed me how to turn the other cheek.

If Momma did it Jesus’ way, Daddy was all John Wayne. Two kinds of salvation running on parallel tracks, and both were indispensable. American evangelicals learned to live in the tension. 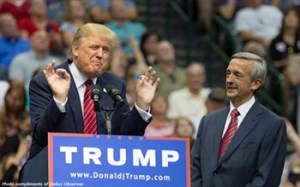 The most outspoken proponent of Jesus/John Wayne dualism is Robert Jeffress, pastor of First Baptist Church in Dallas. Liberals can’t understand how a follower of Jesus could be so enamored of an arrogant, ignorant, spiteful, vicious, unforgiving and brazen casino magnate like Donald Trump. Trump, by all appearances, is the antithesis of Jesus.

When Trump talks religion there is no there, there. His biblical ignorance is boundless. Asked if he asks God for forgiveness, Trump is incredulous. Why would he want to do that?

And yet the quintessential Baptist preacher is working to get Trump elected. Why?

Jeffress confronts this familiar question head on. “I was debating an evangelical professor on NPR,” he once explained, “and this professor said, ‘Pastor, don’t you want a candidate who embodies the teaching of Jesus and would govern this country according to the principles found in the Sermon on the Mount?’” “I said, ‘Heck no.’ I would run from that candidate as far as possible, because the Sermon on the Mount was not given as a governing principle for this nation.”

In the context of Jesus/John Wayne dualism this makes perfect sense. Jeffress spells it out for us:

Nowhere is government told to forgive those who wrong it, nowhere is government told to turn the other cheek. … Government is to be a strongman to protect its citizens against evildoers. When I’m looking for somebody who’s going to deal with ISIS and exterminate ISIS, I don’t care about that candidate’s tone or vocabulary, I want the meanest, toughest, son of a you-know-what I can find.

Jesus can save your soul, but John Wayne will save your ass.

So what if Trump is a notorious womanizer who has been married three times; so was the Duke. Men like Wayne and Trump represent white male manhood in all its swaggering glory.

John Wayne, the man, died in 1979, but the mythology he cultivated lived on in the politics of Ronald Reagan. An inordinate fidelity to Jesus made Jimmy Carter weak; but Reagan had received a double portion of John Wayne’s spirit.

Ronald Reagan, the man, passed from our sight in 2004, the same year that Donald Trump started a 12-year run on “The Apprentice,” a reality show that would define his brand. Working without a script, Trump was mesmerizing. He could be tough, sentimental, outrageous, cruel, even sinister, but he was always confident. His ego filled the room, swallowing the camera whole. Transferring his persona to the political arena, Trump humiliated regular politicos like Jeb Bush and Marco Rubio.

No one was surprised when John Wayne’s daughter, standing at a podium in front of a wax statue of her sainted dad, endorsed Donald Trump for president. You didn’t have to explain the symbolism to the Donald. “When you think about it,” he said, “John Wayne represented strength, he represented power, he represented what the people are looking for today because we have exactly the opposite of John Wayne right now in this country.”

How can Barack Hussein Obama personify idealized white masculinity? He can’t. Hence the appeal of birtherism.

Donald Trump markets himself as “the meanest, toughest, son of a you-know-what” in America — the John Wayne stand-in the Reverends Jeffress and Falwell were looking for.

Which is why Donald Trump really could stand in the middle of Fifth Avenue and shoot somebody without surrendering support. This isn’t about liking the man, or approving his lowdown ways; it’s about the kind of salvation that really counts.

This may be the last election in which a majority of American voters would consider voting for John Wayne.

A steadily growing non-white electorate, for obvious reasons, is completely uninterested in idealized white manhood. John Wayne was an unapologetic racist and Trump stands proudly in that tradition.

John Wayne politics can still sway the hearts of rural white women, but in the suburbs the tide is beginning to turn.

And now we have a generation of young evangelicals that knew not John Wayne. Jerry Falwell Jr. is just old enough to buy Jesus/John Wayne dualism, but a younger generation of Liberty University student wants their Jesus straight.

John Wayne and Jesus are morally incompatible and, the moment we understand that, American Christianity will change rapidly, dramatically and unpredictably. Saddle up, pilgrim, we’re in for a rough ride.