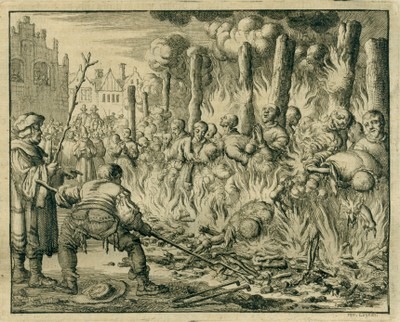 ​So what’s your religion?” the young man wanted to know. “My ancestors were Anabaptists,” I said, “and I find myself identifying with that tradition.”

“So, what’s an Anabaptist?”

“Well, they are sometimes called the radical wing of the Protestant Reformation,” I replied, choosing my words with care. “They went back to the teaching of Jesus, so they believed in radical forgiveness, loving their enemies, caring for the poor and they were committed to peace and non-violence.”

In contemporary America people are far more likely to take their moral cues from politics than from religion. When we want to get at the essence of a person we look for political clues. If you know a person is a Democrat or a Republican you can make educated guesses about where they stand on a variety of issues; knowing their religious affiliation won’t tell you much.

Mainline Protestant and Roman Catholic preachers shy away from partisan-sounding sermons because their parishioners divide evenly along political lines. Because politics is about the business of the people, the polis, almost every subject is too political for the pulpit.

My wife, Nancy, recently ran for the Texas State House and I spent a lot of time block walking. One Saturday morning I saw a 5-year-old girl furiously riding her bicycle down the block. As I rounded the corner I saw the girl’s mother sitting on her front porch with a watch in her hand. “You did it in only 29 seconds this time,” the mother announced cheerfully. I didn’t know if the woman was on my list, but I decided to pull out a brochure and approach her anyway.

I quickly learned that the woman was home schooling her daughter and that she was a registered Republican who couldn’t bring herself to vote for Donald Trump in November. She couldn’t vote for Hillary Clinton either, she assured me, because “the sanctity of life is a deal breaker for me.”

In other words, most white evangelicals are insulated from the hardscrabble life experience that makes abortion a live option even for women who oppose the practice on moral grounds. White evangelicals home school and send their children to private schools so they won’t have to rub shoulders with low-income black and Hispanic children. Black and Hispanic religious leaders typically condemn abortion, but they see it as a symptom of deprivation and vote for the party that talks about addressing poverty.

White American evangelicals think of morality in strictly individual terms. Evangelical Christianity is about working hard, staying faithful to the spouse of your youth, raising children in the fear and admonition of the Lord, and living within the law.

White mainline Protestants avoid political references on Sunday morning because that’s what feels safe for them. Mainline Christianity is all about being kind, staying positive, celebrating diversity and refraining from judgment. Morality, whether personal or corporate, is a touchy subject.

Because the Bible is a lively debate featuring dozens of conflicting voices, both conservative and liberal Christians can mount a biblical defense for their way of being church.

White evangelicals are so intent on harmonizing the radical Jesus with the rest of their inerrant Bible that the distinctive features of his message are effectively silenced.  Jesus must be made to agree with Joshua, Ezra and Nehemiah.

Mainline Protestants are so put off by all that violence in the Old Testament and all that retrograde teaching on women and gays in the New Testament that they keep the good book at arm’s length.

Jesus can teach us to read the Bibles his way, but we aren’t listening.

Religious options that work for millions of Americans can be expected to persist. But what about the growing multitude that checks out American Christianity in both its liberal and conservative disguises and walks away in disgust? In a free country, that’s their choice, of course. But a lot of these people are driven by an intense spiritual hunger. Moreover, they are intensely drawn to the person of Jesus but can’t see much connection between American organized religion and the Jesus who blessed the poor, counseled radical forgiveness, infinite generosity, open hospitality and enemy love.

Is there any evidence that the prominent expressions of white American Christianity are migrating in the direction of Jesus-centered religion? Lots of people would like to see it happen but, despite some positive movement on the fringes, the teaching of Jesus has been shunted to the sidelines.

Maybe we should just be thankful for all the good these churches do. Maybe they’re doing the best they can. If so, millions of potential Jesus followers will continue to drift away from an American church that can’t address their passions, problems and perplexities.

So here’s my question: if it isn’t realistic to expect the stressed-out churches of white America to change their ways, might it be possible to found new churches dedicated to the unique vision of Jesus?