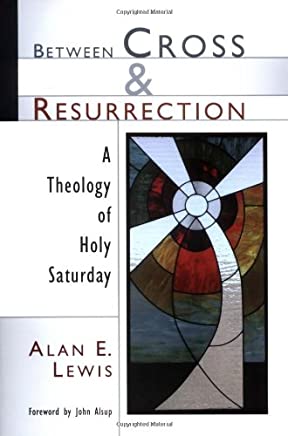 We like to believe that the cure to what ails us has been baked into creation.  If something is broken, we say, time and the rhythms of life will bring healing.  It isn’t true.

In the natural world things grow old and die and our best poetry and philosophy is simply an explication of this fact.

These words from Alan E. Lewis, a Presbyterian theologian writing between bouts of chemotherapy, diagnose what’s wrong with death-denial in general and with a lot of Easter sermons in particular.  This is from Between Cross and Resurrection: A Theology of Holy Saturday.

Perhaps the greatest threat to the gospel story, that the Jesus whom Jerusalem murdered God raised from the dead, is the well-intentioned effort of preachers and theologians to make these scandalous, mysterious happenings comprehensible by suggesting that they mirror the familiar.  In particular, illuminating analogies are frequently adduced from the phenomenon of the cyclic: the rhythms of sleep and waking, death and birth, which we experience night and morning and observe through all of nature’s seasons, as well as in our own passages from infancy to parenthood to death.  Above all, the Easter victory over death is domesticated as the supreme instance of a generic immortality–the inherent capacity of human beings, or more usually of the human soul or spirit, to survive the grave and achieve eternal unity with our transcendent source.  All these attempts to treat the events of Good Friday to Easter Day as particularizing a familiar universal, either anthropological or cosmological, disregard the very narrative which presents them as history–as new, unique happenings, involving a particular unsubstitutable person at an unrepeatable point in time and space.

Still worse, when Christ’s resurrection is explicated as following naturally upon his death, evolving out of it in accord with the predictable laws and rhythms of life, both the awful finality of Calvary and the sheer graciousness and unexpectedness of Easter are compromised.  Easter is surely the ground for hope for human beings and the cosmos rather than an example of life’s self-perpetuation; for it identifies God, and God alone, as the one who makes death’s defeat possible, and gives new existence to the terminated (Romans 4:17).

Jesus was dead and buried; his life was finished and done with.  No rhythm of nature, no innate capacity for humanness, could return him from the grave.  Only God’s grace and power, accomplishing a new act with and upon a man totally deceased, could win that victory.  And although upon reflection it seemed appropriate to the church to say that Christ rose from the dead because of what Easter revealed about his own relationship to God, the Lord of Life, the first Christian instincts were to emphasize rather the total passivity of this person in his resurrection, as in his death, and to attribute all the power and action to his God and Father.  This Jesus who was crucified and killed God has raised from the dead.

One thought on “Resurrection ain’t natural”