We love Francis because he upholds the Utopian tenets of Catholic social teaching without damning those who do not.

Pope Francis is catching flak for his unguarded commentary on the Charlie Hebdo massacre. 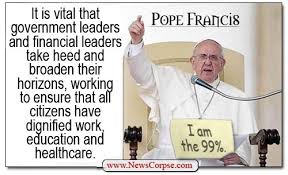 “I go to church to save my soul.  It’s got nothing to do with my vote. Pope Francis has linked the two. He has offered direct criticism of a specific political system. He has characterized negatively that system. I think he wants to influence my politics.”

He’s right, the Pope does want to influence his politics.  And, although the new Pope hasn’t criticized a particular brand of politics, he is demonizing the economic system near and dear to Varney’s heart.

The Pope’s Apostolic Exhortation, Evangelii Gaudium (“The Joy of the Gospel”) doesn’t attack capitalism as an economic system.  The target is the brand of trickle down economics that is often associated, in the United States, with the Chicago School of economics.  Capitalism always comes with some measure of governmental regulation; it’s a matter of how much and of what kind.

The argument driving Evangelii Gaudium begins with a bold statement:

We need to distinguish clearly what might be a fruit of the kingdom from what runs counter to God’s plan.  This involves not only recognizing and discerning spirits, but also—and this is decisive—choosing movements of the spirit of good and rejecting those of the spirit of evil.

END_OF_DOCUMENT_TOKEN_TO_BE_REPLACED

Now before the festival of the Passover, Jesus knew that his hour had come to depart from this world and go to the Father. Having loved his own who were in the world, he loved them to the end. The devil had already put it into the heart of Judas son of Simon Iscariot to betray him. And during supper Jesus, knowing that the Father had given all things into his hands, and that he had come from God and was going to God, got up from the table, took off his outer robe, and tied a towel around himself.  Then he poured water into a basin and began to wash the disciples’ feet and to wipe them with the towel that was tied around him.  He came to Simon Peter, who said to him, “Lord, are you going to wash my feet?”  Jesus answered, “You do not know now what I am doing, but later you will understand.”  Peter said to him, “You will never wash my feet.” Jesus answered, “Unless I wash you, you have no share with me.” Simon Peter said to him, “Lord, not my feet only but also my hands and my head!” Jesus said to him, “One who has bathed does not need to wash, except for the feet, but is entirely clean. And you are clean, though not all of you.” For he knew who was to betray him; for this reason he said, “Not all of you are clean.” After he had washed their feet, had put on his robe, and had returned to the table, he said to them, “Do you know what I have done to you? You call me Teacher and Lord—and you are right, for that is what I am. So if I, your Lord and Teacher, have washed your feet, you also ought to wash one another’s feet. For I have set you an example, that you also should do as I have done to you. Very truly, I tell you, servants are not greater than their master, nor are messengers greater than the one who sent them. If you know these things, you are blessed if you do them.

There is actually nothing original or brand new in these words of Jesus that we are to love one another. The commandment to love one another goes back much, much further than Jesus himself. It is one of the themes that is cited again and again all through the Old Testament. And Jesus had certainly repeated those words again and again as he walked the ways of the earth during the days of his flesh.

So, what, then, is the special nuance that made this final mandate at the last supper so special and so memorable, as it is, right down to this very moment?