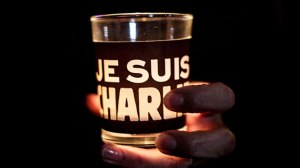 Pope Francis is catching flak for his unguarded commentary on the Charlie Hebdo massacre.  While insisting that violence in the name of religion is “an aberration”, Francis used Dr. Alberto Gasbarri, his event planner, to illustrate his beef with unrestrained religious satire.

“If my good friend Dr. Gasbarri says a curse word against my mother, he can expect a punch.”

To illustrate, the Pope tossed a playful hay-maker at his companion.

The response from the left was immediate.  Bill Maher, as per normal, could hardly contain himself.  “F**k the Pope,” he bellowed with his characteristic sneer.  Then this:

“Well, George Bush said it: you’re either with us or against us.  Apparently the pope is not with us because he came down on the side of the bad guys.”

“The bad guys,” one assumes, are conservatives, much as, in Anne Coulter’s world, the bad guys are liberals.  Coulter and Maher understand one another; they both trade in outrage and grotesque overstatement.  It’s funny if you agree, and offensive if you don’t.

Writing in The Guardian, Polly Toynbee took issue with the Pope’s insistence that “you cannot make fun of the faith of others.”

Oh yes, you can. You may not choose to. It may not be wise or polite or kind – but you can . . . No, it’s not normal to punch someone who insults you; the pope’s Christ certainly didn’t think so. Verbal provocation is never an excuse for violence – that’s the wife-beater’s defence.

Actually, Jesus didn’t think non-violence came naturally, that’s why he talked about it so much.  If an insult against her mother doesn’t evoke a physical reaction from Ms. Toynbee it may be because, unlike the Pope, she has never worked as a bouncer in Argentina.

Similarly, if western liberals think Muslims should join the fun when a non-Muslim reduces their Prophet to the level of farce it’s because liberals in the west generally see religion as a silly business that calls for ridicule.  If you believe that Allah is the just and benevolent creator and judge of all things you take a slightly different view.  It is precisely this inability to honor the devotion of someone unlike yourself that sparked the Pope’s ire.  That’s why he resorted to a street analogy that would certainly make sense to anyone who came up in the barrio, the ghetto, or any working class neighborhood in Britain.

Was the Pope speaking as the Vicar of Christ (as a Christian speaking primarily to other Christians), or was he simply remarking on the real-life consequences of unguarded rhetoric in common sense terms that anyone, Christian, Muslim or atheist, could understand?  I suspect, the latter.

Bill Maher loves to point out the gaping gulf between the facile bilge spouted by Christ’s pious defenders and the historical Jesus himself, and this time was no exception:

“I think it’s in Galatians 13 when Jesus said: Turn the other cheek… Into my fist you f***king mook.”

Maher has a point.  If the Pope was speaking for Jesus, he could have used a more felicitous illustration, but his conclusion would have been pretty much the same.  Jesus says we are flirting with hell-fire when we call our neighbor a fool.  More to the point, Jesus counsels forgiveness and words of love for the enemy who insults, beats and abuses us.

That ain’t natural, whatever Polly Toynbee might say.  The natural response, as Francis suggests, is to lash out at those who insult us.  If Christians hurl insults at our opponents, we shouldn’t be surprised if we get a swift knee to the groin. That is natural.

Jesus told his disciples to transcend the natural response to injury and insult for two reasons.  First, we serve an infinitely merciful God (on that point, Christians, Jews, and Muslims are in full accord).  Second, most of the provocation in first century Palestine came from powerful figures who enjoyed the backing of Roman legions.  (They called it “Roman privilege” back in the day.)  Lashing back at a Roman official was a recipe for instant death.

The civil rights movement changed America because leaders like Martin Luther King understood the counterproductive futility of armed rebellion and the wisdom of following the advice of Jesus in the manner of Mahatma Gandhi.  Powerless people win by letting exposing the moral bankruptcy of the oppressor; there is no other path to victory.

If you think Jesus’ counsel to turn the other cheek sounds has a utopian ring, you are, perhaps without realizing it, working from a position of power.

How does all of this relate to the Charlie Hebdo atrocity and the legitimacy of religious satire?

If the Pope was speaking as one Catholic Christian to other Catholic Christians, he was simply reminding his flock that they they couldn’t follow Jesus and mock non-Christian religions.  Christians, if they are true to their calling, eschew mockery.  It isn’t just that we shouldn’t; we can’t, not without denying the one we have chosen as our Savior.

Satire isn’t funny when it flows from power.  A slaver mocking his slave isn’t engaging in satire, he’s being sadistic.  A slave mocking the slaver, behind the slaver’s back of course, understands the healing balm of genuine satire.

Muslims living in France, though much more numerous than a decade ago, subsist as a tiny island surrounded by a non-Islamic ocean.  Dozens of mosques have been vandalized since the Charlie Hebdo outrage, and French Muslims fear the worst has yet to come.  Secular Europe may feel intimidated by “radical Islam”, but if the power equation is viewed objectively, Muslims have more to fear from French secularists than French secularists have to fear from them.

What about freedom of speech?  Is it an absolute right or, as Pope Francis suggests, are their limits to free speech?

Folks like Polly Toynbee and Bill Maher now realize that Francis is neither a liberal nor a conservative; he is a Christian.

The distinction is important.  Freedom of speech can be viewed as an absolute right if we see the full flowering of the autonomous individual as the highest good.  But if the ultimate goal is achieving a measure of equilibrium in a radically diverse world, freedom of speech will always live in tension with mutual respect.

Secularists who have given up on the god-thing knew the new Pope would trample their toes sooner or later.  Francis believes that God was incarnate in Jesus Christ.  That places him on the side of the poor and oppressed, the side of radical compassion and the side of universal love.  That might sound like bleeding heart liberalism at first glance, but the resemblance is only skin-deep.

God, not the autonomous self, is at the heart of the Pope’s concern.  At times this will make him sound like a liberal; at other times, from the secular liberal perspective, he may sound downright reactionary.  He is neither.  He’s a God person.

Gone are the days when any one philosophy, religious or secular, can wield hegemonic influence.  Each of the major religions has splintered into hundreds of competing sects.  My take on Christianity, for instance, differs from that of the Pope.  But I have more in common with Francis than, say, Dr. Albert Mohler, a fellow Baptist.  We’re not going to agree all the time, or even most of the time.

Neither Christians, Hindus, Muslims nor Buddhists can expect to dominate the religious world and the secular worldview, though growing in strength, will never gain majority status.  The moral impulse is a vestige of religion; scientific empiricism (the only philosophy that retains universal credence in the liberal camp) is morally neutral. Our moral sensibilities flow from religion or they are entirely arbitrary. Either way, we must all agree to disagree.

To me, Jesus’ teaching on non-violence, his advocacy for the poor, and his call to universal love sound like a common sense recipe for human survival.  That’s because I live and breath in a Christian context.  To many secularists (I am thinking particularly of the new atheists), all religions are equally ridiculous.  Non-Muslims will never understand why mockery of the Prophet evokes such a visceral response from some Muslims.  We will never understand each other; but we can live together in peace, and that demands a species of mutual respect that transcends mockery.

2 thoughts on “Pope Francis sparks outrage on the left”