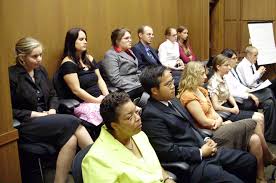 The New York Times editorial below explores the relationship between race and the selection of death penalty juries. The editorial mentions a 2011 study conducted at Michigan State University that found a significant racial bias in the selection of jurors. In the 166 cases reviewed by researchers, “prosecutors dismissed more than twice as many blacks from the jury (56%) as others (25%).” Moreover, the disparity was even greater when the defendants were black.

The Curtis Flowers case is a prime example of this type of racial bias. Curtis, an innocent man, has been tried six times for the same crime. His first two convictions were overturned due to prosecutorial misconduct. Discrimination in jury selection led the Supreme Court to overturn Flowers’ conviction after his third trial. Trials four and five ended with hung juries. At the end of the sixth trial, Curtis was convicted and sentenced to death. Although Mr. Flowers has spent over 15 years in prison for a crime he did not commit, we can only hope that the growing awareness of racial bias in jury selection will help bring justice for Curtis and others facing similar situations. MW

North Carolina courageously passed the Racial Justice Act in 2009, making it the first state in the country to give death row inmates a chance to have their sentences changed to life without parole based on proof that race played a significant role in determining punishment.

A state court is now hearing the first challenge to a death sentence under that law. Marcus Robinson, who has been on death row since 1994, must prove that state prosecutors discriminated against blacks in selecting juries, affecting the outcomes of cases, including his. His lawyers presented a notable study by researchers at Michigan State University showing this kind of bias.

In 173 cases between 1990 and 2010, the study examined decisions involving 7,421 potential jurors (82 percent were white; 16 percent were black). In 166 cases, where there was at least one black potential juror, prosecutors dismissed more than twice as many blacks from the jury (56 percent) as others (25 percent). With black defendants, like Mr. Robinson, the disparity was even greater. Even accounting for “alternative explanations” besides race for different “strike rates” — for instance, excluding those who expressed ambivalence about the death penalty — the study found blacks were still more than twice as likely to be dismissed.

Under a 1986 Supreme Court case, it is unconstitutional for a prosecutor to strike any potential juror on the basis of race, ethnicity or gender. But the court allowed dismissals of jurors for other reasons — like their attitude toward the death penalty or even their demeanor. Prosecutors often use these reasons as pretexts to eliminate blacks from juries. North Carolina’s Racial Justice Act expressly allows consideration of a pattern across many cases. The study found a regular pattern of state prosecutors intentionally discriminating against potential jurors because of race, even though a judge had ruled that the potential jurors could be counted on to render a fair verdict and sentence in a death penalty case.

This bias is not news in North Carolina. Since colonial times into recent decades, racial prejudice has been a huge factor in the imposition of death sentences in the state. The Racial Justice Act, a response to that terrible history, uses statistical studies in regulating the death penalty, as the Supreme Court said legislatures could properly do in a 1987 case. Opponents of the law are battling to repeal it and have scheduled a hearing on it this week. The evidence of gross racial bias presented in Mr. Robinson’s case calls for commuting his sentence — but also for abolishing the death penalty in North Carolina.