Fifty years ago today, Medgar Evers was gunned down in the driveway of his home in Jackson, Mississippi.

This was hardly an isolated incident.

The Children’s Crusade in Birmingham, AL had reached a victorious conclusion a few weeks earlier.

Mass sit-ins had unfolded in Jackson, MS in the weeks leading up to Evers’ slaying.

Hours before Evers died, George Wallace made his defiant doorway stand at the University of Alabama.

Later that night, in response to events in Birmingham, the Wallace grandstanding, and the Winona outrage, John F. Kennedy went on national television to deliver the most stirring endorsement of civil rights ever voiced by a sitting American president.

The tide was turning and Byron de la Beckwith, a white supremacist from nearby Greenwood, Mississippi, knew it.  That’s why he tossed a rifle into his car and headed for Jackson. 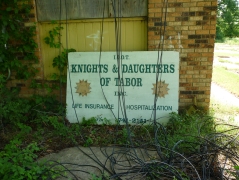 Whenever I lead civil rights tours in Mississippi, we always drop by Mound Bayou, Mississippi, where Evers was a salesman for T. R. M. Howard‘s Insurance Company.  Evers got his start in business selling poor Black people cheap insurance that would pay for a decent funeral and, most importantly, medical care dispensed by the Knights of Tabor hospital in the all-black town of Mound Bayou.  Fannie Lou Hamer died in that hospital in 1977.

Mound Bayou is only a pale shadow of its former glory.  Black business leaders had good reason to establish and maintain the economic and physical infrastructure of the community in the Jim Crow days.  Ironically, as soon as they were free to pursue opportunities in the wider world, Mound Bayou was abandoned by the people who once made it run.

I briefly thought of taking the sign–it didn’t seem to mean much to the people of Mound Bayou–but I decided to let it sit where it is; a sad and fading reminder of the town that gave Medgar Evers and many other civil rights leaders a start in business as well as activism.  Mound Bayou was one of the few places in the Mississippi Delta where African Americans could freely associate and organize in the 1950s, and thousands regularly descended on the vibrant little town to plot, pray and prepare.

We forget that the bold activism of the early 1960s had its roots in forgotten little towns like Mound Bayou a decade earlier.  When Bob Moses, Diane Nash and James Bevel arrived in the Mississippi Delta, they enjoyed the counsel and enthusiastic support of older men and women who were native to the region and had been in the civil rights fight a long time.  It was this intersection of youthful vision and native wisdom that paved the way for the Freedom Summer of 1964.

Medgar Evers had a foot in both these camps.  He was old enough to  be trusted by the old guard in the Mississippi civil rights movement, but young enough to relate to the brave young souls entering the Delta from exotic places like Nashville, Birmingham and New York City.

The only weapon the likes of Byron de la Beckwith had at their disposal was fear, and they wielded it effectively.  People like Medgar Evers, Fannie Lou Hamer, Ed King and Diane Nash refused to be intimidated.  They all paid a dreadful price for their audacity; but they prevailed.

The civil rights movement depended on larger-than-life figures like Martin Luther King Jr and Medgar Evers and couldn’t have succeeded without them.  But the contributions of a holy host of saints, most of them unknown to history, was just as crucial.  In the early summer of 1963, the combined impact of thousands of brave people across the South reached critical mass and the nation turned a corner.

Byron de la Beckwith knew he and his ilk were beaten and Medgar Evers felt the sting of his idiot rage.  But Evers didn’t die a meaningless death.  Fifty years later he is being remembered across the nation, an impressive airport in Jackson bears his name, and a civil rights leader is mayor elect of Mississippi’s leading city.

One thought on “The price of a miracle: Medgar Evers remembered”