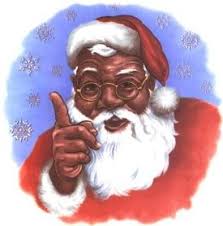 Megyn Kelly’s ill-advised insistence on the whiteness of Santa (and Jesus) has created a well-deserved tidal wave of denunciation.  But the big threat to Christmas isn’t the skin color of Rudolph’s master or the occasional “Festivus” pole.  The baby Jesus has been swept away on a green tide of money.

As the video at the end of this post suggests, Santa is the color of money.  (If you want to see the video with English narrative, you can find it here.)

Sarah Palin is to be congratulated for saying what most of us appear to believe: “I love the commercialization of Christmas because it spreads the Christmas cheers”.

The quote is lifted from a recent interview with NBC’s Matt Lauer.  Here’s the context:

MATT LAUER: The book is not a typical Christmas book. You say that Christmas is under assault from atheists and secular liberals but you also make the point that it’s become way too commercialized. So, is Christmas in danger of becoming extinct–

MATT LAUER: –or is it too in our face?

SARAH PALIN: Well, I hope you read the book because I`m not saying it’s way too commercialized. I love the commercialization of Christmas because it spreads the Christmas cheers, the most jolly holiday obviously on our calendar. It`s wonderful.

My parents didn’t think the commercialization of Christmas was wonderful.  They didn’t tell my sister Carol and me that Santa is a myth–nothing quite that drastic–but they made it clear that Jesus was the Reason for the Season.

On Christmas morning, the Bean kids were allowed to open one present.  One.

Then it was time for breakfast.

Then it was off to church.  Yes, Virginia, Baptists used to have worship services on Christmas morning.  My friends would be all a-flutter about all the presents they had opened.  Not me.

Then is was home for the traditional turkey, dressing and pumpkin pie after which we would read the Christmas story from the Bible–usually Luke’s version.

Finally, about mid-afternoon, my father would relent and let us open the presents and Bimbo the cat would finally get his chance to roll in a great pile of discarded wrapping paper.

Easter was another matter.  My parents informed me that the Easter Bunny was a myth created to cash in on Easter, and that there would be no Easter eggs in our home.  Grandpa Bean would always sent a few candy eggs from his home in Weyburn, Saskatchewan, but that was the extent of it.  Easter was about the resurrection of our Lord and Saviour, Jesus Christ!  Period.

When I was a boy, Baptists did some serious fretting about Santa Claus and agonized over the commercialization of Christmas.  We worried that our traditional celebration of Jesus’ birth had been reduced to a sentimental afterthought.

I am a true child of my parents.  For the past couple of years, my wife Nancy and I have said ‘no’ to Christmas presents.  We still purchase a few stocking stuffers, but that’s it.

On the first Sunday of Advent I pull out the Christmas CD’s and it’s all carols and the Messiah all the time until the great and glorious day arrives.  We stay out of stores whenever possible.  We do not rock around the Christmas tree.  The only concession to the secular Christmas is Raffi’s Christmas album which we reserve for Christmas morning.  (Our kids may not appreciate the nostalgia, but their parents do.)

3 thoughts on “Santa is the color of money”