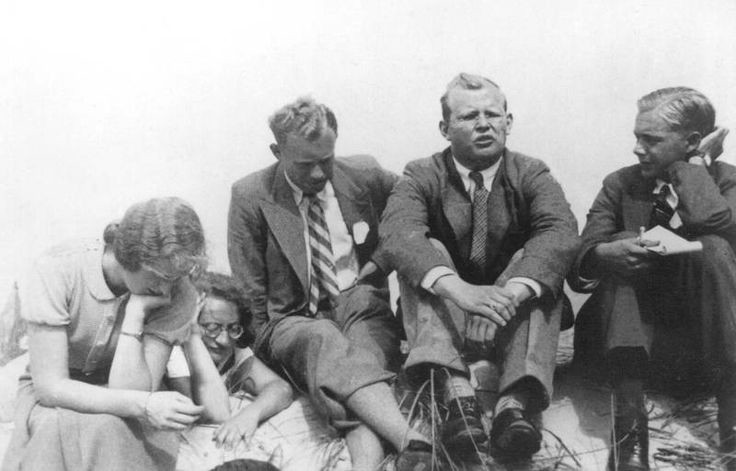 Every time I participate in a Bible Study or a Sunday school class I think of Finkenwalde.  Finkenwalde was an illegal seminary where a young scholar named Dietrich Bonhoeffer taught a handful of pastors between 1935 and 1937.  The school was regularly raided by the Gestapo and many of its students were arrested.  Finally, the Nazis shut it down altogether.

For the next two years, between 1937 and 1939, Dietrich Bonhoeffer moved from one German town to another, teaching classes wherever he could gather a handful of students together.  He called it his “Seminary on the Run”.

It was as if the early days of the Christian movement were making a comeback.  The Apostle Paul was constantly on the move, staying one step ahead of his religious opponents and the Roman authorities.  Dietrich Bonhoeffer was no different.

What forced Bonhoeffer to take such drastic steps to teach the Bible and Christian theology to young Germans?  Nothing less than the complete collapse of Christian resistance to Adolf Hitler and the Nazis.  Confronted by an Anti-Christ religion built on power, violence and submission, the churches of Germany failed utterly.    Bonhoeffer believed the problem was essentially theological—German Christians simply didn’t understand the gospel.

When Adolf Hitler came to power in Germany in 1933, the nation was famous for its biblical scholars and theologians.  Adolf Hitler and his inner circle had nothing but scorn and derision for organized religion, but the nation’s churches, Roman Catholic and Protestant, carried so much clout that the Nazis couldn’t attack them directly.  Instead, they created their own church, known as the Deutsche Christen, or German Christians.

Which is why Dietrich Bonhoeffer said the challenge the Nazi movement posed to the German church had nothing to do with politics and everything to do with theology.  The Christian gospel opens God’s family to all people, regardless of race, gender or nationality.  Back in the beginning when misguided believers taught that only Jews could be Christians, the Apostle Paul fought back with all the eloquence he could muster.  The very gospel was at stake.  “Here there cannot be Greek and Jew, circumcised and uncircumcised, barbarian, Scythian, slave, free man,” Paul told the church in Colossae, “but Christ is all, and in all” (Colossians 3:11).

Centuries later, Gentile Christians were excluding Jewish Christians, the entire Jewish heritage in fact, from the family of God.  Some theological issues are open for debate; this one was not.

Most German Christians disagreed with the ugly tenets of Hitler’s German Christianity, but so long as the Nazis left the churches free to conduct their affairs in peace, the churches were as docile as lambs.  Germany had been humiliated in the years following the First World War, inflation was rampant, unemployment was widespread, and a strongman promising to restore German honor inspired hope and high expectations.

Hitler and his cronies knew perfectly well that Nazi dogma and orthodox Christianity could not co-exist. Jesus taught forgiveness, love for enemies, compassion and mercy; the Nazis were all about power, domination, violence and the humiliation and extermination of enemies.  But “the struggle with the churches”, as the Nazis called it, had to wait until Nazi Germany had the European continent under its thumb.  In the meantime, the Nazis worked to silence the churches little, by little, by little.

This explains the famous statement by Lutheran pastor Martin Niemöller:

Niemöller became a leader in what was called “the Confessing Church”, but for the first three years of Hitler’s reign, the Lutheran pastor was an ardent supporter of the Nazi movement.  He may not have understood the full extent of the holocaust unfolding around him, but everyone knew that Jews were being rounded up and loaded into box cars.  And everyone knew that those who disappeared never came home again.

The Lutheran Church was founded on Martin Luther’s idea of Two Kingdoms: one earthly, the other heavenly.  In Germany, as with most European countries, there was no meaningful separation of church and state.  Citizens paid a church tax to the state and the state passed the money on to the churches.

Gradually, over a period of centuries, the Church of Jesus Christ, in all its varied expressions, has been pushed to the margins of society.  Our business, we are told, is the life to come.  The life of the city, state and nation should be left to political leaders.  But when the faith community is silenced the larger society is deprived of a moral compass.

Hitler had a special loathing for the Roman Catholics and moved quickly to shut down their monasteries and seminaries.  Catholic leaders were too afraid to protest.  Even when the German armies swept into Poland, an overwhelmingly Catholic nation, and started rounding up priests, nuns and monks, Catholic leaders in Germany thanked God for granting such a glorious victory to the Fatherland.

The evangelical churches fared no better. 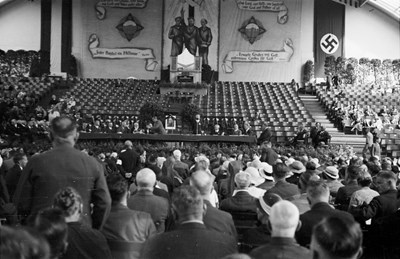 In 1934, a year after Hitler came to power in Germany, the churches of the Baptist World Alliance gathered in Berlin.  Behind the podium, huge portraits of Baptist giants like Charles Haddon Spurgeon and William Carey were on display; on the other side hung a giant Swastika.

Baptist leaders from around the world cut Hitler some slack because he shared some of their moral scruples, and, in 1934, moral scruples were a big deal.  One speaker after another noted that Adolf Hitler didn’t smoke or drink alcohol, that he had banned American gangster movies from German theatres and would not allow women to appear in public in bright red lipstick.  A man so determined to reform public morality couldn’t be all that bad.  Right?

Since Mennonites are dedicated to non-violence, pacifism, compassion and forgiveness, I was sure that they must have taken a heroic stand against the Nazis.  Again, I was disappointed.  Mennonite leaders in Germany (and in my native Canada) were focused on the plight of their brothers and sisters suffering persecution in Soviet Russia.  When the armies of Germany invaded the Ukraine, they were greeted as liberators by German-speaking Mennonites and over 20,000 of their number made the hard trek back to the Fatherland in the late 1930s.

Mennonite leaders reasoned that if the Nazis hated the communists they must be okay.  The enemy of my enemy must be my friend, or so the reasoning went.

So far as I can tell, the Jehovah’s Witnesses were the only religious group in German to stand against Hitler from the beginning.  The consequences were dreadful.  One-tenth of their number died in concentration camps.  Because they lived outside the protective bubble of orthodox Christianity, the witnesses, like the Jews, they Gypsies and the homosexuals, had no defenders.

Dietrich Bonhoeffer’s early writings gave little indication that he would someday stand up to his nation’s government.  He started out as a proud German who, as much as any German patriot, longed for his nation to regain its honor and prestige.  As a seminary student, he taught that the German volk, despite recent setbacks, stood at the pinnacle of cultural evolution.

But that was before the Lutheran pastor spent a fateful year at Union Seminary in New York City in 1929.   It wasn’t the seminary with its world-famous faculty or the sophisticated white churches that changed Bonhoeffer’s heart.  One morning an African-American classmate took young Dietrich to visit the Abyssinian Baptist Church in Harlem.  Thousands of poor black families, most of them from the American South, had flocked to Harlem to escape the ravages of the Great Depression. Under the leadership of Adam Clayton Powell Sr., Abyssinian Baptist was determined to meet the physical, emotional and spiritual needs that were swirling around their church building.

The Harlem Renaissance was in full swing in 1929.  Black America was sifting through its tragic heritage, searching for answers and a way forward.  Some Black intellectuals rejected Christianity out of hand.  Was it not the Christians who dragged us to this land in chains?  Is it not Christians who keep us poor, uneducated and voiceless?  Have we not languished under a Christian reign of terror for hundreds of years?  Enough of this!

Adam Clayton Powell, the pastor of Abyssinian Baptist Church, understood these sentiments, but he disagreed profoundly.  White Christians endorsed slavery and Jim Crow segregation, he said, because they misunderstood their own religion.  We who have walked the way of suffering are able to take up our cross and follow a Jesus who, like us, was despised and rejected of men.  We are a people of sorrows, we are acquainted with grief and our eyes are open.

The young Bonhoeffer, just 23 years of age at the time, was mesmerized by Powell’s preaching; he had never heard anything remotely like it.  After a few months he was asked to teach a class for African-American young people.  Gradually, as he interacted with his students, Bonhoeffer learned to see the world through the eyes of the oppressed and the downtrodden. His eyes were opened and he was shocked by what he saw.

Bonhoeffer developed a deep love for what were then called “Negro Spirituals” and, when he sailed back to Germany, he brought a stack of recordings with him.  Years later, when he founded his illegal seminary at Finkenwalde, Bonhoeffer would play these records for his German students and they would sing along, inspired by the profound simplicity of the lyrics.  Imagine Negro spirituals sung with thick German accents.

Banned from teaching, preaching or even writing, Bonhoeffer sailed back to America in 1939.  But no sooner had he arrived than he felt God tugging him back to Germany.  “How can I participate in the reconstruction of the German church,” he told his anguished family, “if I abandon her in her hour of peril?”  Dietrich was on the last steamer bound for Europe as the fog of war descended.

“The ultimate question for a responsible man to ask is not how he is to extricate himself heroically from the affair,” Bonhoeffer once said, “but how the coming generation shall continue to live.”

Dietrich Bonhoeffer has emerged as a hero for both evangelical and liberal Christians.  But he wasn’t interested in being a hero or a martyr or a saint; he was interested in speaking the truth even when he feared it had vanished from the face of the earth.  A handful of others, like Elisabeth Schmitz, did a better job of defending European Jews.  But nobody grasped the theological dimensions of the Nazi threat like Bonhoeffer, which is why we still read his stuff.

The mission of the church is to bear witness to the kingdom vision Jesus unleashed in the world.  More often than not, we drop the ball.  But this present moment is pregnant with opportunity.  We always get a second chance.  How will the church respond to the threat of white nationalism?  Will we continue to repeat the mistakes of the German church, or will we come to our senses before, once again, it is too late?

One thought on “When churches fail: the abiding challenge of Dietrich Bonhoeffer”